This may be the time of the year when you are thinking of warmer climates, sunshine and food that signals something different. For a taste of the Caribbean head to The Reef on Main Street near King Edward Avenue. There is a second location on Commercial Drive, if that is more accessible. Given The Reef has been at the Main Street location since 1999 and opened two more locations and a food truck, they must be doing something right. The owners are from the Caribbean and the current Executive Chef and Prep Chef both originate from major islands in the Caribbean.

Caribbean cuisine is a fusion of African, Amerindian, European, Indian and Chinese. These cuisines are very different, but in combination with the Caribbean’s different fruits and vegetables create unique food. While the Caribbean is a relatively small geographical area there can be vast differences between the many island nations dependent on the most influential cuisines.

A common misconception about The Reef is that their food is mostly Jamaican. For certain, many of the dishes can trace their origins to Jamaica, but a number of other islands are represented in their menu. You may have heard of “jerk” chicken or other meats? The definition of “jerk” is a style of cooking native to Jamaica in which meat is dry rubbed or wet marinated with a very hot spice mixture called Jamaican jerk spice. Traditionally applied to chicken or pork.

The Reef’s jerk is a spicy North Coast Jamaican wet marinade of all spice, soy, tomato, garlic, ginger and scotch bonnet peppers. Most of their meals are marinated for 24 hours and then slow cooked.

The Reef prides itself on representing a number of Caribbean island countries’ cuisines. Marco Escalante, General Manager, mentioned their food may be described as “Ital” food. This description is defined by the Rasta movement meaning “of the earth.” This provides some insight into how the Caribbean treat their food and its importance to their lifestyle.

They also have a variety of beverages, both alcoholic and non-alcoholic. A native Jamaican drink is Ting, which is carbonated and cleansing to the palate. Sangrias and ginger beer complement the Caribbean cuisine. You can choose from many different Rums, Liquers, Cachaca, Cocktails, Wines and Beer. 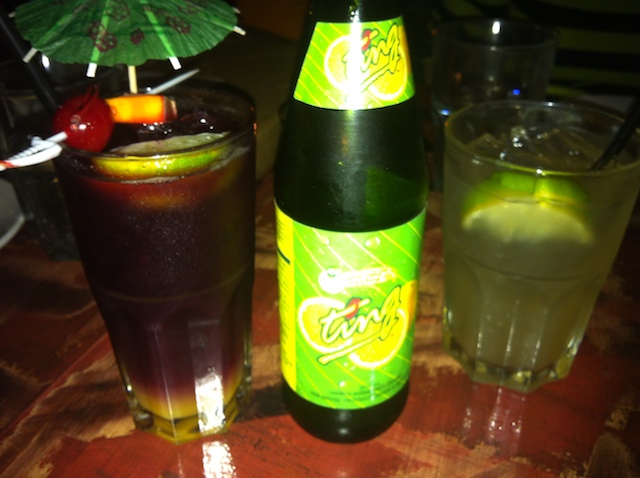 Upon being seated, you will receive Johnnycakes. These are fried dumplings that come with a roasted coconut mango butter and a dipping hot sauce. These are soft and very tasty. The butter is a great complement and if you want it hotter then the hot sauce will definitely do the trick. A great start and beats the traditional bread starter! 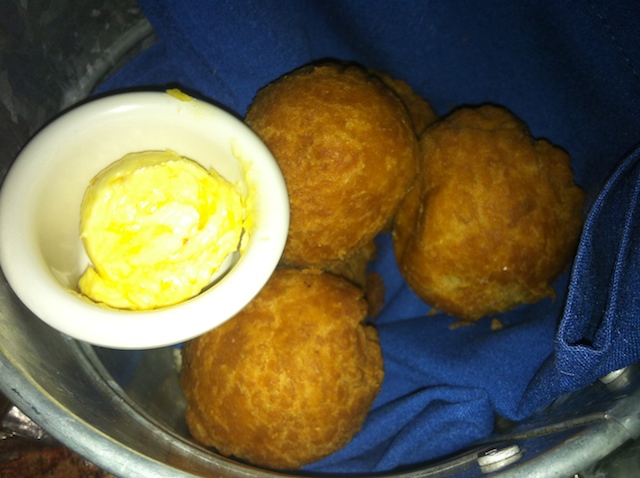 Up first is the Appetizer Platter comprised of chana salad (chick peas), plantain chips, jerk chicken wings, roti bread and coconut prawns. It comes with two dipping sauces: jerk mayo and a sweeter Firecracker Marmalade. Both sauces are worth trying and delicious. The coconut prawns taste, well, like coconut. The prawns are tender. The plantain is crispy and a great texture contrast given they are deep fried. The jerk chicken had a good spicy hit and the meat was tender. Can I have more?! Great way to sample different Caribbean foods among a larger group. 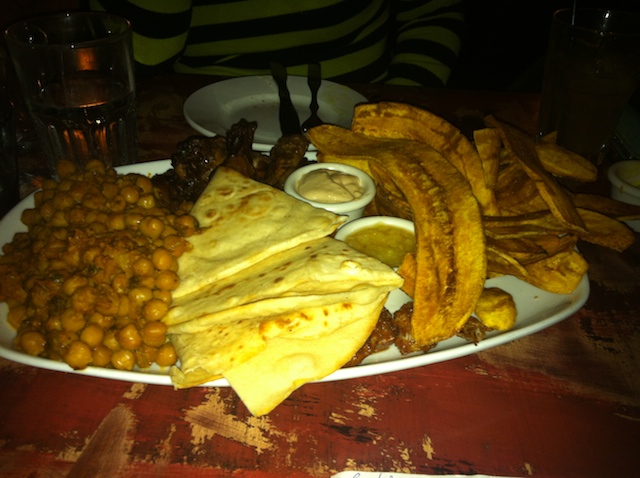 Jamaica’s national dish is Ackee & Saltfish. What’s ackee? It’s a West African fruit that was brought to Jamaica. While it is a fruit, it’s treated as a vegetable by the chefs. Ackee is creamy in texture and delicate like eggs. The Ackee & Saltfish looks like scrambled eggs, but the texture is more soft. The ackee itself is very subtle in terms of taste and maybe like crab? The salted cod dominates the taste. 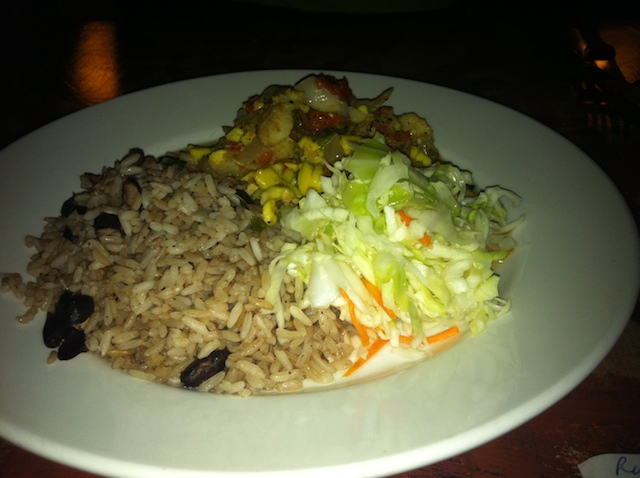 Another favoured Jamaican dish is the Oxtail. Yes, it is the tail portion. For our table this was the most flavourful of all the Caribbean dishes. The meat itself was tender and a stewed meat comfort food kind of feel. No hot spice in this dish. The bones add taste and don’t forget to pull every last piece of meat from each bone and add to the accompanying rice. 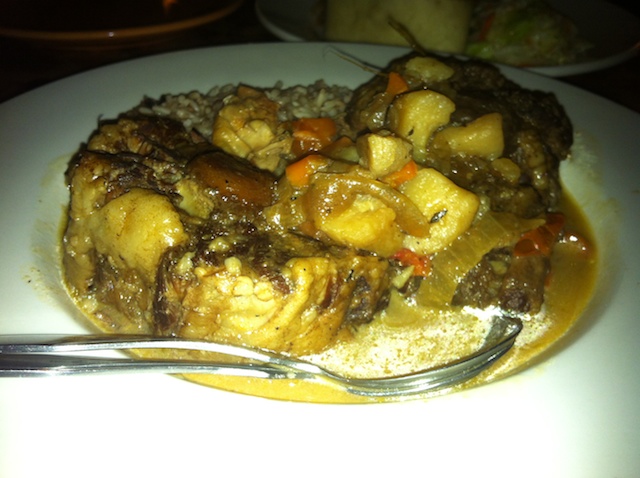 For certain, eating at a Caribbean restaurant means trying the Roti, and in this case it was goat meat. Another example of slow cooked tender meat that is full of flavours and excellent consistency. There is curry with the goat, although it does not dominate the taste nor is it spicy. 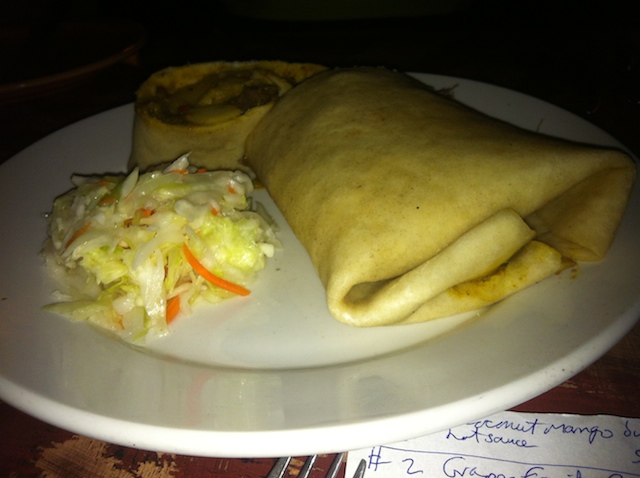 We couldn’t pass up trying the Jerk Pork. Thick cuts of juicy pork with the jerk sauce on top of each piece. The meat was tender and it comes with the rice/peas and cole slaw. The jerk sauce is very tasty and you can ascertain very quickly why jerk sauce is so popular in the Caribbean. 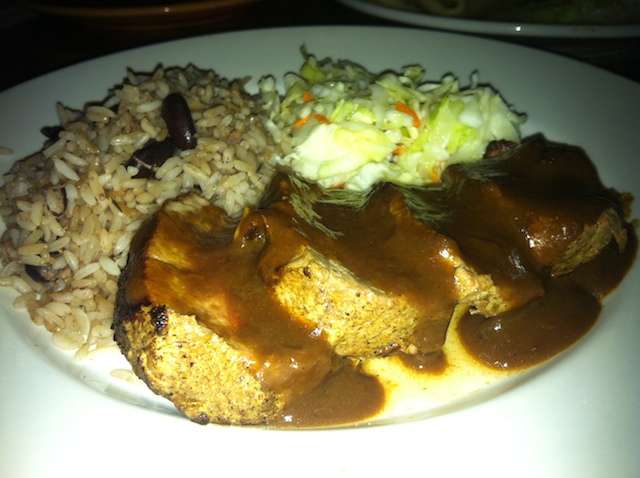 The Reef is a very casual eatery with a Caribbean motif. It has a fully stocked bar where you can relax and enjoy good drinks and food. The ambience is cool while it’s fairly dark inside. The restaurant was portrayed on the Food Network TV show “You Gotta Eat Here” for their Jerk Chicken Poutine. Not all their dishes are Caribbean, so you can sample more Canadian style foods. For drinking, they have the largest varieties of rum in western Canada, and they occasionally have rum tastings. They also have a third restaurant location in Victoria. Entrées including sandwiches, ranging from $12 to $19.