Palestine is forever in the news. Fortunately, the traditional cuisine of Palestine is superb and is carefully and enthusiastically prepared on Vancouver’s east side.

For a taste of Palestine try Tamam Restaurant and bring a good appetite. You will not be disappointed, and they have dishes that meet the needs of vegetarians and gluten-free diners.

Palestinian cuisine has originated from a culture that goes back many centuries, becoming more refined with the improvements in food quality. 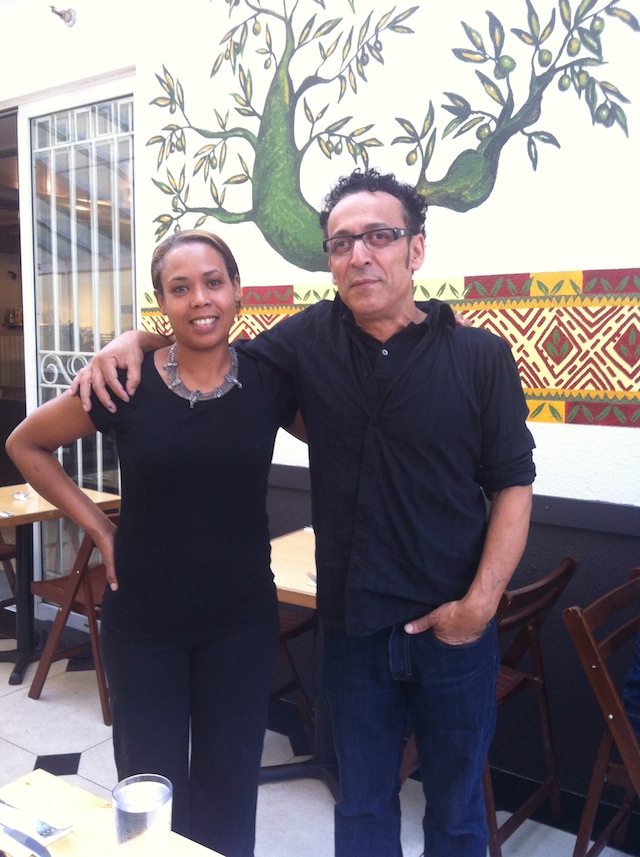 Tamam Zobaidi is the chef and her husband Sobhi runs the front. They were both born and raised in Palestine and as proud Palestinians decided to showcase their cuisine. Let’s face it, Palestinian cuisine is very rare and intuitively a person would think it is basically Mediterranean and/or Middle Eastern. What this energetic couple have successfully accomplished is to retain the unique cuisine of Palestine and let the diners figure out any comparisons to the neighbouring countries.

The ambience is casual and very warm. The owners and servers ensure you feel like you are eating in their home. While the menu is not extensive, it offers a great range of choices. A smaller, but more focused menu ensures you are not confused and Taman can better prepare for each day. It appeared that many locals were eating the night we showed up and it was very busy despite it being a mid-week day.

Palestinian cuisine uses the same basic ingredients as other Mediterranean countries, but the mix is different and the basic herbs and spices differ. The food is not spicy, but they provide a green hot sauce comprised of jalapeños, herbs and olive oil, and it packs a severe punch. For the food itself, lots of herbs used but the seasoning is kept to a minimum. The couple import many of their spices from Palestine. Taman has carefully cultivated ancient and traditional Palestinian recipes.

Another key principal is that all food is made daily. Even the hummus and mutabal are made each day in the restaurant. For certain, each dish has healthy ingredients and it will not be spicy for those eaters who don’t want to be on fire. To date, their business has a number of loyal, returning customers from the neighbourhood and farther environs. Halal prepared meat is used exclusively and nothing is deep fried.

Each dish was incredibly delicious and satisfying. We started with two appetizer dishes that were good omens of equally delicious dishes to follow. The most popular appetizer dish is the Halloumi Eggplant of grilled halloumi cheese on a bed of grilled eggplant, seasoned with olive oil, herbs and lemon. Very lemony flavour profile with some garlic taste. The caramelized cheese offers a different texture to the eggplant. The sauce used has a gentle tanginess to it. This was a huge hit. 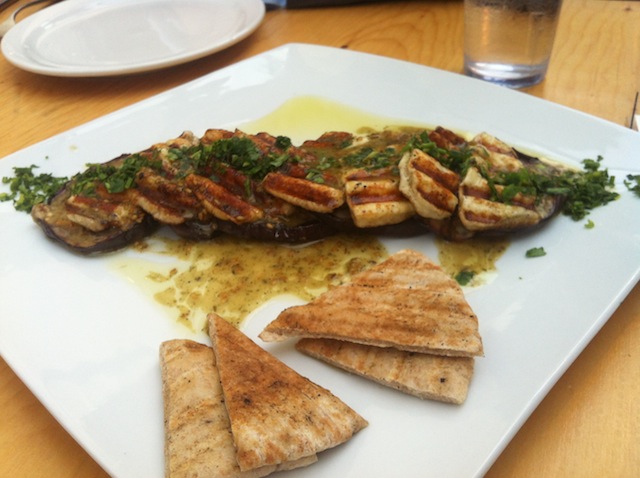 Next appetizer was Tabbouleh. This Mediterranean dish has bulgar, tomatoes, cucumber, parsley seasoned with olive oil and lemon served in three lettuce leaves. This Palestinian version of Tabbouleh is finely diced with a crisp flavour. It is traditional given less tomatoes than commonly found in other cultures and more fresh parsley. Simple, but fresh serving and a little tangy from the lemon and olive oil. 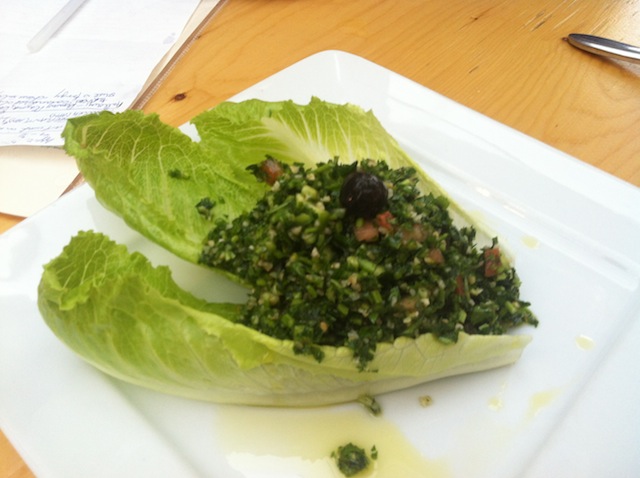 Three entrée dishes followed and each dish was worthy of lots of praise. Mujaddarah made of rice, lentils and caramelized onions and, in this case, slow-baked chicken as the other option is lamb roast. It is described as a classic Palestinian dish. The chicken was dusted with sumac spice and was so juicy, tender and tasty! The rice and lentils combination offered additional texture and taste; perhaps an Indian-inspired flavour? The chicken practically fell off the bone and was cooked all the way through. Good visual presentation. 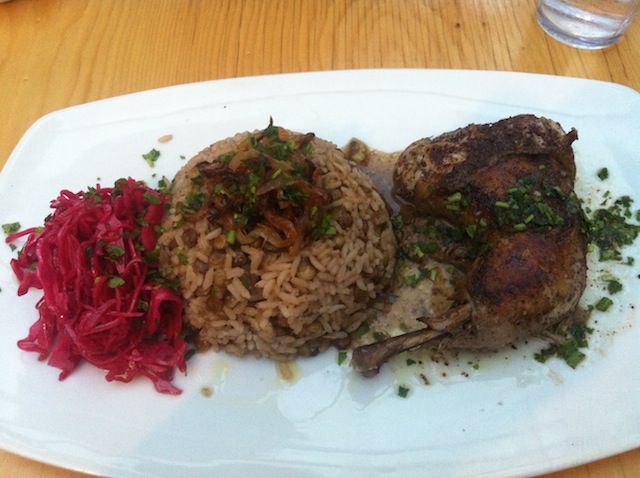 The second entrée up was the Stuffed Cabbage Rolls. Fresh green cabbage rolls stuffed with rice, tomatoes and parsley. Again, we ordered the slow-baked chicken and another extremely tasty meal. Lots of flavour with the rice in the middle and good density. Described as “a cigar rolled up.” The three rolls are complemented by the usual purple cabbage salad, which is tangy, pickled and crunchy. Nothing like eastern European cabbage rolls, but even tastier. The chicken was awesome, although the cabbage rolls on their own were enough to be tasty and memorable. 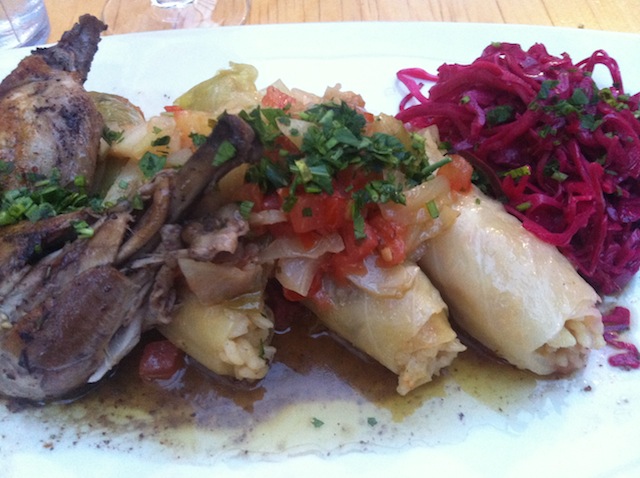 The third entrée was Freekeh. Comprised of toasted-cooked green wheat and the purple cabbage side dish with lamb roast. Ever eaten toasted-cooked green wheat? This is wheat before it matures and another staple of Palestinian traditional cooking. Loved this cooked wheat and enjoyed the texture. The lamb compares to the best lamb eaten anywhere and any type of cuisine. Perfect fat content as not too much, but just enough to enhance the flavour. In fact, in eating the lamb I finished it first so there were no leftovers! Not much sauce or pepper is used, so it is strictly the natural taste of well-prepared lamb. 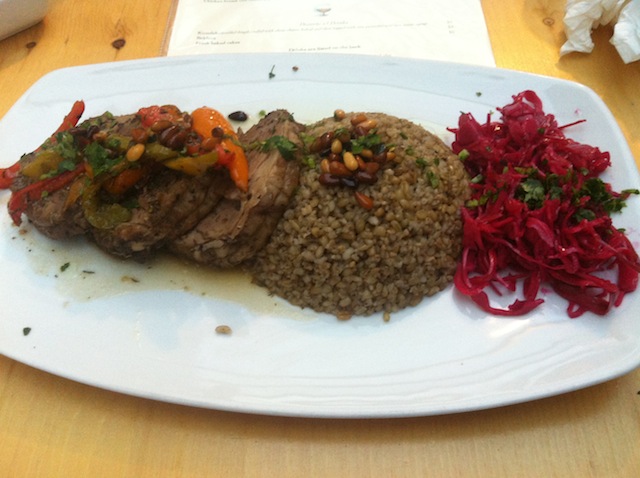 Given the incredible meals we ate, we just had to try their traditional Palestinian dessert despite the fact we were all beyond full. Kunafah is shredded dough stuffed with sheep cheese, baked and then topped with raw pistachio and rose water syrup. This is a very unique dessert and not expected. Quite a mix of flavours as you can see from the ingredients. In addition, the orange colour is quite striking. The finish was sweet, but a real layering of many competing flavours. Give it a try. 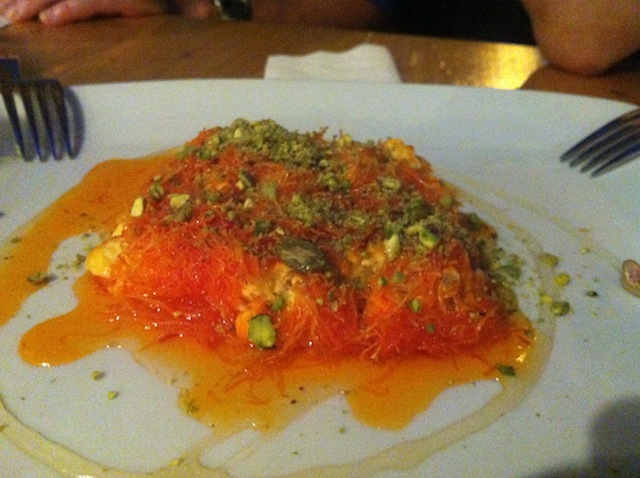 Overall, Tamam Restaurant serves healthy and very tasty food. Appetizer prices range from $5 to $9. Entrées range from $9 to $16 so you will be getting high quality food for your dollar. Their food preparation is designed to ensure the food speaks for itself. There is a pretty decent wine selection that you can check out behind the counter yourself.