Myanmar (formerly Burma) has attracted international attention for its military led government and battles with rebel forces. Locally, for a taste of Mynamar (Burma) you can find excellent and authentic Burmese dishes on East Hastings just east of Nanaimo at Laksa King. This restaurant was formerly called “Bo Laksa King Bubbles & Bits,” but with the new owners it has taken on a shorter name to better represent their cuisine. The country itself is bordered by China, Thailand, India, Laos and Bangladesh. As well, both Indonesia and Malaysia have influenced Burmese cuisine over the centuries. Daniel and Daisy Than are proud and humble owners of this unassuming restaurant seeking to provide cuisine that identifies with their native Burma. While this country has been obscured mostly by its much larger neighbours, it does not take a back seat in terms of expressive dishes. 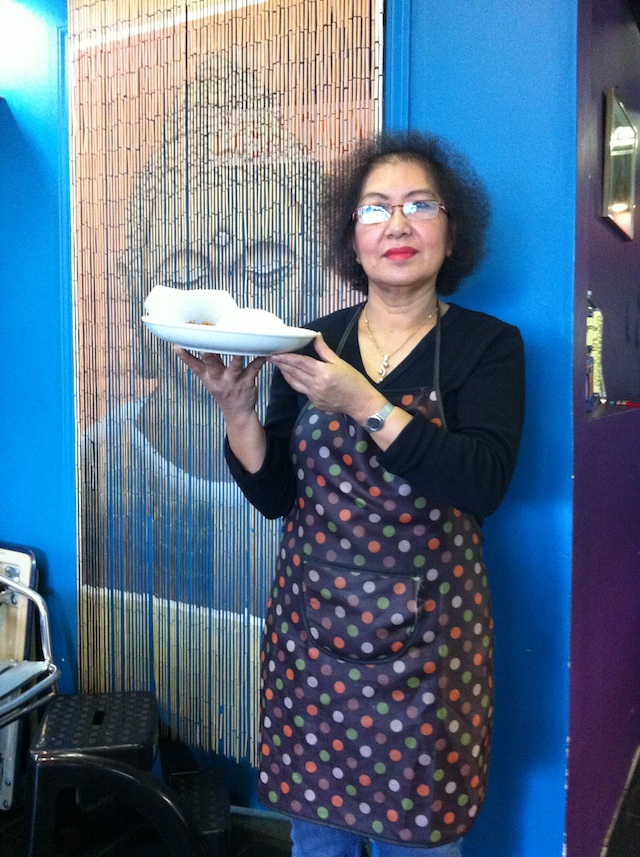 The new owners took over the restaurant about fifteen months ago. They came to Canada in 2002 and worked in various restaurants to get the necessary practical experience. Daniel works the front of Laksa King and his wife Daisy provides the incredible cooking in the kitchen. The interior of the restaurant retains its previous casual decor and welcoming ambience.

From the owners themselves, they describe Burmese cuisine as “eating at the extremes.” This means their food ranges from very spicy to very sweet and hot to cold. Our experience confirmed this self-assessment. In addition, their food is made fresh daily with the best ingredients. Some of most used seasonings and spices are cumin, turmeric powder, masala (wide range of heat) and cilantro.

Burmese cuisine is very diverse. In addition to external influences from other countries, there are large ethnic minorities with their own cuisine. The Burmese cuisine is distinguished for its salads. Our first three dishes were typical Burmese salads.

The spiciest dish by far was the Spicy Squid Salad. Wow, it packed quite the punch! It sets the tongue tingling. The squid itself is tender, therefore, perfectly prepared. There are crunchy bits to add texture. Freshly made and delicate in many ways. If you like heat and tender squid then this dish will meet your expectations. 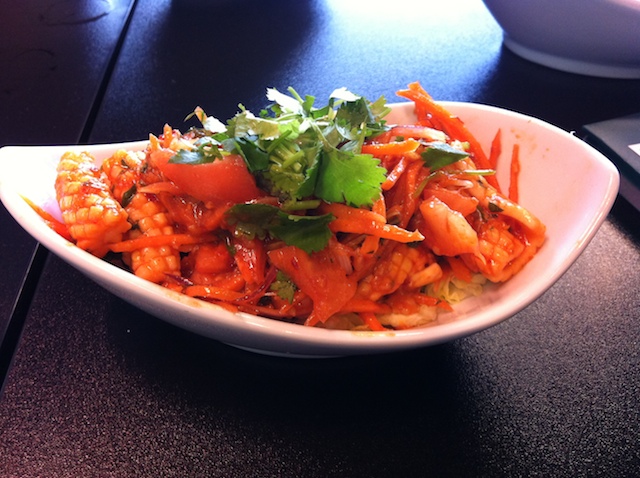 The Green Mango Salad was refreshing and unlike other mango salads from other cultures. Apparently, one of the ways in which this dish differs from other cultures is using unripe or sour mangos and properly treating them before mixing with the other ingredients. Sweet and pungent flavours will emerge. As well, there was a lot of texture again with the salad due to various crunchy bits. So many different flavours. 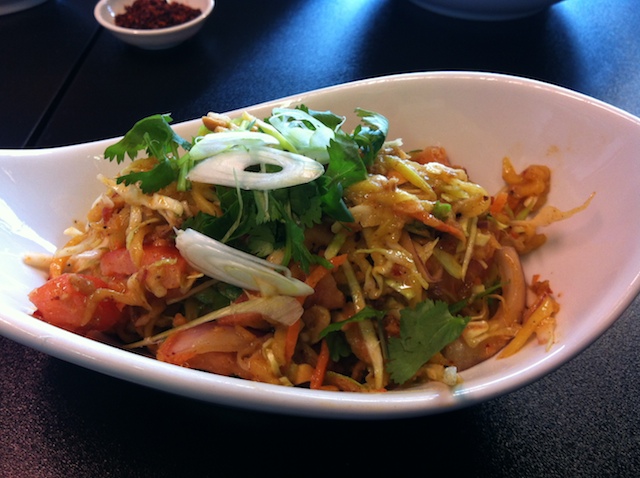 A famous and very traditional salad is Laphet Thoke (Burmese fermented tea-leaf salad). The pickled tea leaves give this dish a very unique flavour that is an immediate hit or not. Other ingredients include tomatoes, garlic chips, roasted peanuts, cabbage, sesame seeds, broad beans and dry shrimp mixed together with fresh lime juice seasoning. Lots of texture and colour. It is not a spicy serving. Definitely, it is a dish to order. 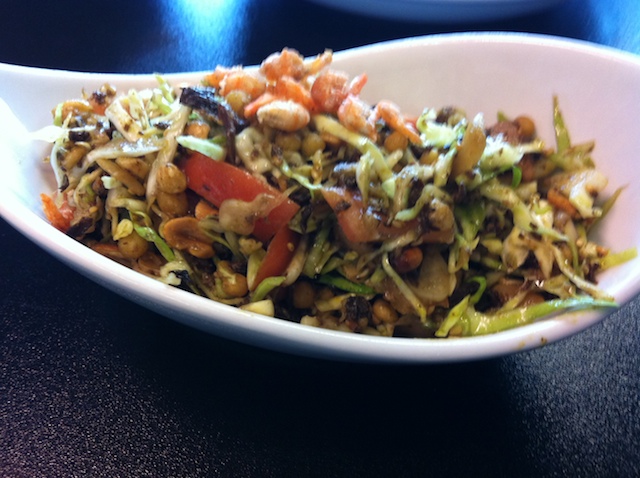 The most traditional Burmese dish is the Mohingar. It has been described as Burmese’s national dish. This is fish stock simmered for six to seven hours and the broth is mixed with onions, garlic, ginger, lemon grass and banana stem. Vermicelli noodles, split pea fritters and a boiled egg are added to the broth at the end. It comes with a side bowl of red chili powder to add some zing to the dish for those who want some heat. Definitely tastes home made with tons of flavour. It must be a national dish as we found it to be like a comfort food and very hearty. 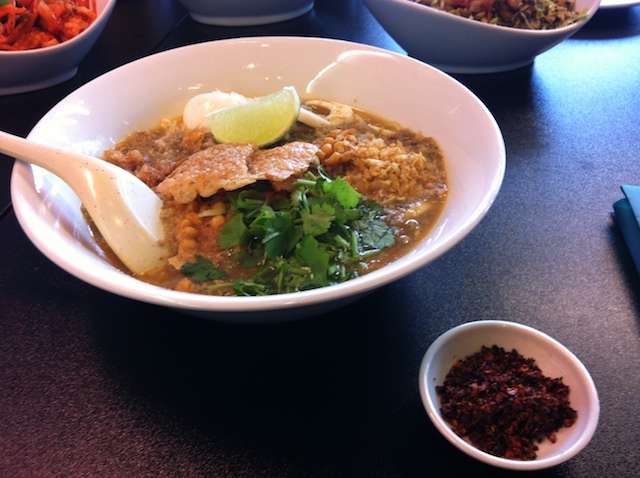 On Sundays you can order their Kyee O (Burmese Hot Pot Noodle soup). Head there on a Sunday for lunch. This is homemade soup comprised of pork meat balls, fish balls, fish tofu, liver, chive, green leaf and served with vermicelli noodles. You can dip in a red sambal sauce if you like. Again, another dish with so many flavours that come all together. Likened to a won ton flavouring given it is Chinese inspired. The ground pork meatballs are coarse and some of the best soup i’ve tasted. Not spicy in any way. 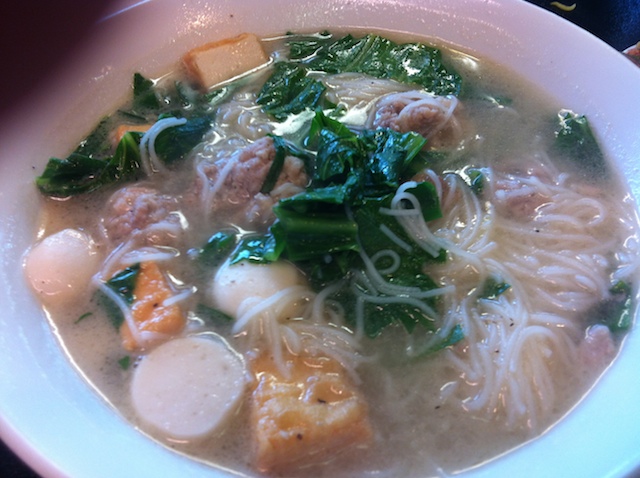 You can’t leave the restaurant without trying their Faluda. Hint: when it arrives, take the spoon and mix all the ingredients and then pour into smaller glasses to share. It will turn into a beautiful pink colour. Comprised of milk, rainbow ice cream, jelly, pudding, sago (like tapioca) and dairy cream. Full of texture and creamy. Lots of rose water taste and not sweet. No one flavour dominates. 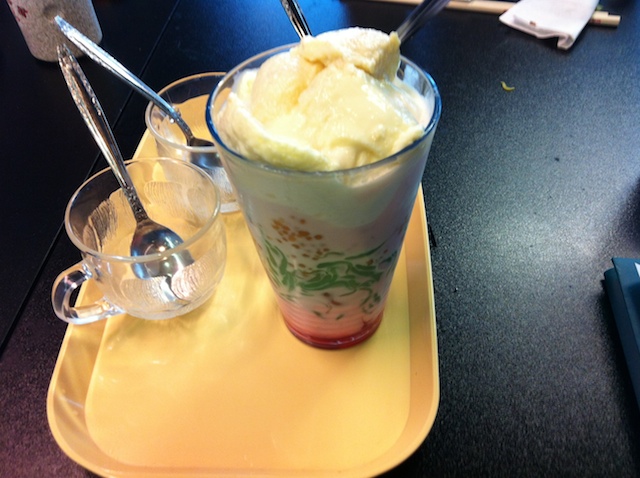 The dishes are inexpensive and include many other ethnic choices inclusive of Thai, Indian, Chinese and Malayasian. It is a small eatery with sixteen to eighteen seats. Their motto is to try hard to make each customer happy. Service was timely, warm and informative. They do not have their own webpage, Facebook or Twitter as of yet.