Ah, the opera! The ultimate in sophistication and high-brow theatre! At least, that’s the common perception of the art form, generally accompanied by the image of a fat woman belting it out in a horned helmet.

Yet when Vancouver Opera’s La Traviata premiered at the Queen Elizabeth Theatre Saturday, it was the offbeat antics of the audience that provided the greatest entertainment of the evening. Let me assure you, there were no monocle-sporting gentlemen or prim and proper ladies to be found. This crowd could easily have rivaled the crudest Canucks spectators in a heartbeat.

Though my presence at Saturday’s opening night was strictly to review the show itself, please forgive my digression as I describe one of my strangest theatre experiences to date:

The evening started off normally enough: Vancouverites milled about sipping wine and cocktails in the lobby of the Queen Elizabeth Theatre, chattering at a respectful volume about what one imagines were purely respectable things. While most folk were dressed in business casual, some women were decked to the nines, sporting elaborate headpieces that made the hats worn at the royal wedding seem like boorish baseball caps in comparison. When the show was about to begin, everyone regally sifted into the theatre. From there though, things got interesting (i.e. awesome).

As the curtains were rising, a handful of people near the front row abruptly rose, covering their mouths and gagging noticeably as they dashed towards the exit. A gaggle of theatre attendants rushed over, mops and rubber gloves in hand as the sopranos and tenors onstage commenced the opening party scene of the production. It turns out someone in this oh-so-distinguished setting had hurled across the entire first few rows. Perhaps a few too many beverages beforehand?

The audience squirmed and shifted perceptively, their concentration and focus irrevocably broken. Difficult indeed it is to concentrate upon theatrics onstage when the sickly aroma of someone’s fresh puke wafts throughout the air. By intermission, ushers were still trying to clean the area while theatre patrons looked on with wide-eyed disgust. I have no doubt some long-time opera attendees are now scarred for life.

And then there were the mobile phone users: Even the most vapid teenager in a movie theatre knows not to be a “Tommy Texter”. And yet, throughout powerful arias and emotional scenes of declared love, the glowing light of cell phone screens regularly illuminated the theatre. Likely everyone was checking up on the hockey score (admittedly myself included).

But the very, very best part of the night? At the climax of the show – when the lead character is on her deathbed and whispering her final goodbyes (this opera’s been around for over 150 years so I don’t consider this a plot spoiler) – someone’s phone loudly went off, drowning out the feverish lamentations onstage. And I’m not talking about one of those regular ringtones – oh no, this was a full-blown, peppy little earworm of a number. Again, butts in seats shifted and necks craned as all looked around in bewilderment. The courtesan’s dramatic dying words tainted by a BlackBerry. 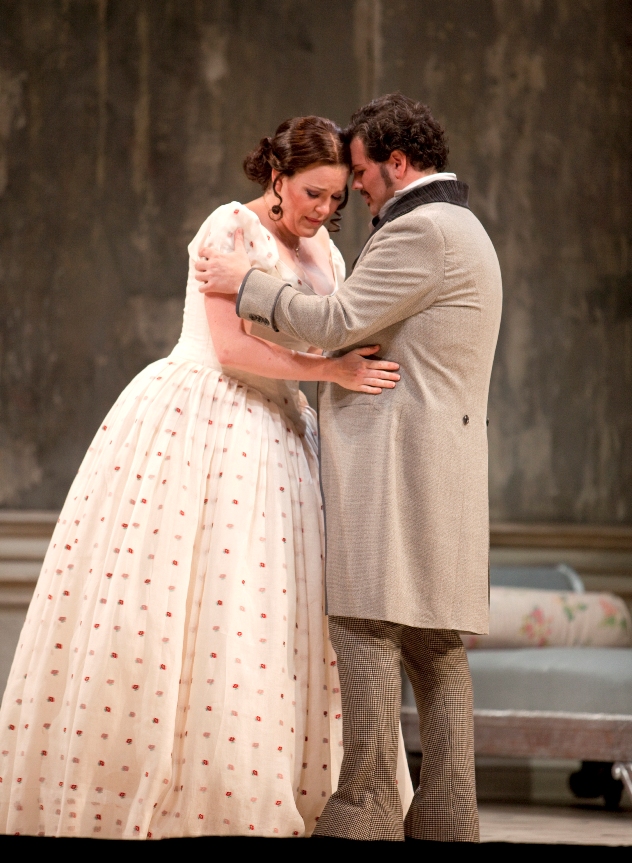 With all the commotion, I had a hard time fully absorbing the production. This is a shame considering Verdi’s La Traviata is the iconic, moving story of a courtesan (aka a high class hooker) who renounces her wild ways for the love of a good man. Her happiness is thwarted by societal judgement and the hooker – um, courtesan – is forced to sacrifice her beloved and then tragically dies of consumption. It’s not a happy tale, but one that’s touched audiences for over a dozen decades.

As always, Vancouver Opera delivers – providing gorgeous costumes, powerful performances and dreamy music. While there are no surprises here (the production stays true to the original 1850 setting), sometimes sticking to the basics is for the best and La Traviata emerges as a satisfying show. My only complaint, beyond vomit and cell phone degenerates, was the set. In previous productions, the set has been a creative, flowing construction that easily shifted between acts. Here, five minute pauses were required as attendants shifted chairs and couches from one end of the stage to the other. This was certainly not the most productive method as people were already driven to distraction by upchuck and unruly ringtones.

In any case, the shenanigans at this show have already got me anticipating Vancouver Opera’s next season which opens in October with West Side Story. If La Traviata attracts hooligan barfers, one can only imagine the crowd drawn to the tale of warring gangs in the streets of New York! Here’s hoping a knife fight breaks out in the aisles.

La Traviata runs until May 12th at the Queen Elizabeth Theatre. Tickets and showtimes at vancouveropera.ca.
﻿﻿