The Canucks lost one of the longest tenured players in franchise history today, with Kevin Bieksa being traded to the Anaheim Ducks.

One of the most interesting characters in franchise history, Bieksa has had a lot of great moments as a Canuck. His rise and fall in many ways mirrored the Canucks over the last ten years.

Let’s take a look back at Kevin Bieksa’s career:

Drafted by the Canucks in the 5th round in 2001, Bieksa arrived to the Canucks’ farm team with a bang in 2004. I’ll let Pierre LeBrun tell the story:

“He played his four years at Bowling Green. They were eliminated from the playoffs, and we brought him to Manitoba [AHL] on a PTO [professional tryout],” Burke said. “One night after a game in Winnipeg, in which I don’t think he played, they went to a local establishment. Fedor Fedorov was sitting at a table and Bieksa walked by the table, bumped him by accident and spilled Fedorov’s beer. Bieksa apologized and offered to buy another beer.”

“So, they go outside. Fedor was a big guy, he was a lot bigger than his brother Sergei,” said Burke. “Then Fedor comes in and Bieksa drills him with one punch. Knocks him stone cold and cut wide-open and leaves him lying on the pavement.”

Burke said Bieksa figured he was done with the Canucks organization and would be sent home the next day.

“Send him home? I said, ‘We’re going to sign him tomorrow,'” said Burke, whose affinity for truculence is well-established.

Bieksa made his NHL debut on December 19, 2005. He played 39 games for the Canucks that year, but it wasn’t until the following season that he really made his mark. 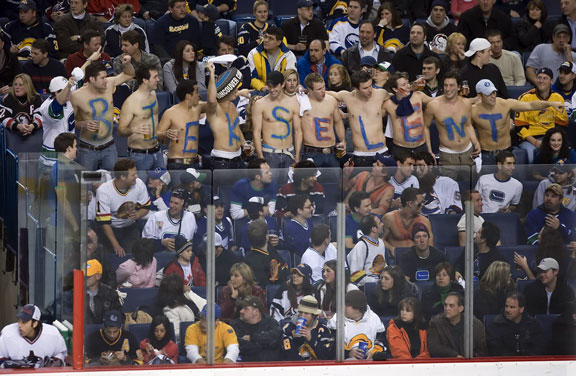 The 2006-07 season was when Kevin Bieksa really made his mark. Paired primarily with Willie Mitchell, Bieksa quickly became a fan favourite. He played tough, he was good defensively and he could produce offence as well. Bieksa finished his first full NHL season with 12 goals and 42 points, while getting into 6 fights.

Jumping up in the Rush

When Bieksa was at his best, he was making the right reads and jumping into the rush. There was perhaps no better example of this than his goal in Game 2 of the Western Conference Final.

Bieksa ended up with a breakaway, to put the Canucks ahead 3-2. Vancouver went on to win 7-3.

When Bieksa first joined the Canucks, Dan Cloutier was their goalie, Marc Crawford was the coach and Todd Bertuzzi still played on the team. He became a big part of the new leadership group under Alain Vigneault that produced the most successful era of Canucks hockey.

Who could forget Bieksa having fun with this LA-based reporter in 2012, who thought he was Ryan Kesler.

Nobody was better than Bieksa with a microphone in his face. A real character, Bieksa has provided some of the best Canucks moments away from the ice.

Bieksa has never been afraid to drop the gloves. He has fought 50 times in his career with Vancouver and at his peak he may have been the best pound-for-pound fighter in the NHL.

But of course, Bieksa’s best moment was one of the best moments in the history of the Vancouver Canucks. With the Canucks leading the series 3-1, Bieksa tracked the puck after it took a wild bounce off a stanchion at Rogers Arena and beat Antti Niemi in double overtime to send the Canucks to the Stanley Cup Final.