Danielle Barnes was not only a big fish in a small pond, coming from her hometown of Abbotsford to take on big city fashion, but she had diamonds encrusted in her fins and a dream that refused to flounder.

US novelist Pearl Buck once claimed that the truly creative human minds must “pour out creation,” and that “by some strange, unknown, inward urgency they are not really alive unless they are creating.” A moment in the mind of Danielle Barnes may be comparable to roaming through circus grounds after dark, as it is by the guidance of this obscure realm that she creates the most beautiful things.

The extensive list of Danielle’s talents, which include fashion and costume styling, wig styling, theatrical makeup application, choreography, set design, model coaching, artistic directing, alternative modeling and acting, are merely compliment by the journey in which she has taken to realize them.

“It all began when I was about three years old and I got my first Barbie,” claims Barnes. “I would dress them up, pose them in scenes that I would build and take their pictures on vintage cameras.”

Eventually her pet guinea pigs succumbed to her photo shoots, and then once she outgrew that it was any family member or friend who didn’t mind playing dress up.

As life would have it, Barnes moved to Vancouver to build her modeling portfolio. “All my photographers would ask me to bring my own wardrobe,” recalls Barnes, who at the time didn’t know this would be a clutch factor in her decision to branch out on her own.

“I remember exactly the day I decided to direct and style my very first photo shoot. It was the summer of 2010; I was looking for something new and thought it would be hot to set up a pirate themed photo shoot. A week later there I was on set with four models, a hair stylist, a make-up artist and a photographer. I was hooked!”

Barnes grew up in a family where frivolous things, such as an extensive wardrobe, were not priority. “I always felt an extreme need for my physical appearance to reflect the way I feel inside, opposed to hiding or disguising it.”

With that in mind, she refused to allow lack of funding to stop her from expressing herself and realizing her potential. “I trained myself to think outside the box, to become flexible with concepts and inspired not by what I saw on the shelves at Walmart, but by what I could turn it into with a good pair of scissors and some pins.”

Needless to say Barnes has come a long way since her timid days as a little blonde dancer from W. J Mouat high school in Abbotsford. “Moving to the city with absolutely no money and a lot of trust for people who aren’t always trustworthy roughens a girl up pretty quickly,” explains Barnes. “I made a lot of mistakes but I learned to never give up on myself.”

As a natural born observer, the fashion culture in Vancouver really intrigued the multi-faceted one woman talent show, who used to spend a lot of time on public transit to see what the ‘people’ were wearing, as opposed to what the magazines were “telling us to wear.”

She claims that the “hipster” culture is an interesting fashion to watch, saying that “less is more,” by taking the “90’s grunge style one more notch in the direction of ‘understated’ where we thought it could go no lower.”

However, her most preferred place to spot some best dressed is East Hastings. “I did a fashion preview once on Hastings trends and got major public backlash regarding it. I need to do another soon. Fashion is war in Vancouver.” 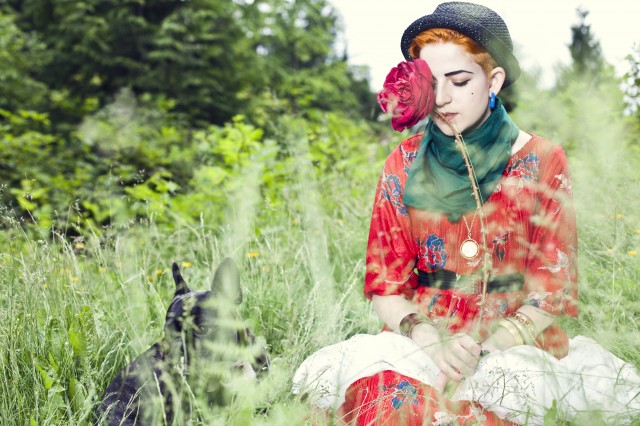 Currently in the process of creating a blog/website to publish her independent work, and hoping to break into the music video industry and possibly Broadway production, her views on the ever evolving world of fashion acknowledges the artistic powers of the mind over dressing for ones place in society.

So, why does Danielle Barnes want to dress you in all teal blue with a neon yellow hat covered in poppies? The truth is, she doesn’t know why, but it will look fabulous.