Jason Priestley is a man of many motivations. As a parent, actor, and now ambassador for a clean drinking water program, Priestley spoke with VancityBuzz about the global water crisis and what Canadians can do to help.

You probably know this Vancouver-born actor from his days on the 1990’s Global hit show “Beverly Hills 90210.” But Jason Priestley has been making an impact behind the camera, and it all begins with his efforts to help curb preventable death in developing countries. “There are almost a billion children and families in the world today that don’t have adequate access to safe drinking water,” says Priestley, who is astounded by the stats. “As Canadians, we often take our water for granted, and as a parent, the thought of children dying from lack of clean water is a tragedy.” 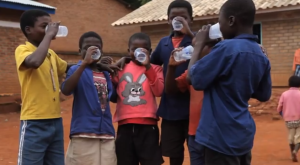 Parenthood served as a major catalyst in Priestley’s decision to back the initiative, as the opportunity to teach his children about the importance of giving back could not be overlooked. “When Procter and Gamble, and Walmart Canada came to me with the opportunity, and told me they were going to run this program here in Canada, I couldn’t say no, says Priestley. “I’m always trying to teach my kids about charity and this program was a great chance to do that.”

The program is simple, as explained by Priestley. “All people have to do is go to their local Walmart or Walmart.ca, and buy any P&G product in the month of April and P&G will donate one day’s worth of safe drinking water to someone in a developing country,” he says. “This is a way to show our appreciation for the abundance of resources that we have.”

Each small packet, which is demonstrated below, will purify ten litres of water that is infested with worms, parasites and bacteria that makes it toxic to drink. So far, seven billion litres of water has been purified.

“The goal is to save one child’s life per hour, which is very ambitious, but I believe they can get there,” says Priestley. “I’m proud to be working with P&G and Walmart Canada to speak to Canadians on how they can help bring clean drinking water to children and families in the developing world.”

Other than the clean water initiative, Priestley recently made his directorial debut with “Cas and Dylan.” The movie follows an unlikely couple, at opposing ends of life, who connect on a trip across Canada.