A Japanese dairy farmer has planted an incredible flower garden for his blind wife, in order to cheer her up. Toshiyuki Kuroki and his wife Yasuko have been happily married for 60 years. But after their 30th wedding anniversary, Yasuko began to have problems seeing and a week later she completely lost her eyesight due to complications with her diabetes. Yasuko became depressed and withdrawn because of her condition.

Toshiyuki was heartbroken over his wife’s sadness but then he came up with an idea to cheer her up. He began to plant bright pink shibazakura flowers and he worked for two years to create a garden for Yasuko so she would spend time outside to enjoy their smell. The garden is so beautiful that it attracts over 7,000 visitors a year and Yasuko is happier than ever.

After 250 days spent at sea, Master Seaman Francis Legare was excited to see his partner Corey Vautour. The two men shared a kiss after Legare stepped off the boat, making it a historic moment for the Royal Canadian Navy. “We are reflective of society and we do recruit across all across society. If we don’t adapt, we won’t have any sailors joining,” said Rear admiral Gilles Couturier, commander of the Pacific Navy.

It’s a good thing that five-year-old Cloe Woods paid attention during her preschool class trip to the local fire department in October. One of the key things Cloe learned was to evacuate a building as soon as possible if there was a fire. This past week, Cloe put her skills to the test when the stove in her house caught on fire.

When Cloe heard the fire alarm, she ran to her blind grandmother’s bedroom. Cloe grabbed her grandmother’s dog and led both of them safely out of the house. She then instructed neighbours to call 911. “She saved her grandmothers’ life and saved her own life,” said John Hellmers, chief of the Kenner Fire Department in Kenner, Louisiana. 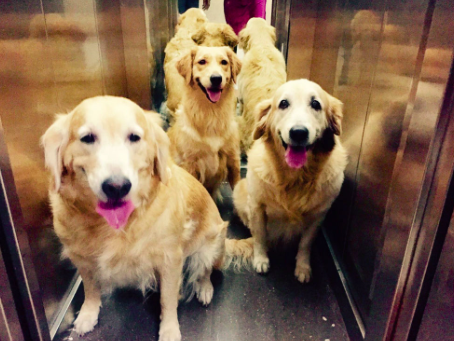 The T2 terminal at Chhatrapati Shivaji International Airport in Mumbai, India, is doing something very special for travellers who get nervous while flying. Therapy dogs Goldie, Pepe, and Sunshine are the newest employees at the terminal. The golden retrievers are trained to help stressed out passengers calm their nerves before flying.

Nete Hangel has been battling chronic pain ever since she was 11. But the 18-year-old from Denmark has been conquering the aches with a unique hobby. Hangel has been making a mural of Pokemon with decorative beads. When the mural is finished, it will be over 7ft high and contain over 100,000 beads. Hangel says that her art is therapeutic and it helps distract her from the pain she experiences on a daily basis.

6. Dog found safe after being trapped in sinkhole for two days

Dog rescued from 14-foot-deep sinkhole in Pennsylvania after 2 nights inside https://t.co/3u7VteUfqX pic.twitter.com/aK35QEhDrK

A golden retriever was found safe after spending two nights trapped in a 14-foot-deep sinkhole. Megan Holmes was walking her dog Skye during a snowstorm on Monday evening. She let Skye off leash and after a few minutes, the dog disappeared. In a panic, Holmes began to look for Skye but could not find her.

Holmes’ husband Ron returned to the site the next day to search for Skye but had no luck. The couple came back on Wednesday and heard a dog barking. They followed the sound and it led to a sinkhole where Skye was trapped. Firefighters arrived and safely lifted Skye out of the hole. She is recovering well and her owners are relieved to have their beloved dog back home.

7. These baby orangutangs are best friends and it’s the cutest thing ever

Gito and Asoka are baby orangutang best friends. They are absolutely adorable, but their story has not always been a happy one. Gito was found close to death trapped in a cardboard box. Asoka was abandoned by his mother and was found alone in the rainforests of Borneo. Thankfully, both orangutans were rescued and now they are living happily in an animal rescue center in Indonesia.

A family fleeing from violence in Iraq lost their beloved pet cat Kunkush during their journey to Lesbos. After several months, they were reunited with their pet. Find out how in the video above.

A guide dog stolen by a gang was returned with an apology note https://t.co/ZOWcIHy4In

While on a walk with her blind owner in Beijing, Qiaoqiao the guide dog was taken by a gang of men. Tian Fengbo was heartbroken after his four-legged friend went missing. But on Tuesday, the dognappers decided to do the right thing and return Qiaoqiao. They attached an apology note to the dog that read: “We were wrong…we beg pardon.” Mr. Tian said that Qiaoqiao is doing well and he is relieved to have his guide dog back home.