An old Seattle hotel has been transformed into a homeless shelter all thanks to the help of online retailer Amazon and non-profit organization Mary’s Place. The company purchased the hotel and gave it to Mary’s Place, which helped connect needy families and residents to the new shelter. The building has 60 rooms and can house up to 200 people in need.

2. Chewbacca Mom will make your day

Texas mom Candace Payne broke the internet all thanks to a Chewbacca mask. Payne has taken over social media after she filmed herself trying on a Chewbacca mask she bought for her birthday. In the video, Payne can’t control her laughter when she sees herself as Chewbacca.  She posted the video on Facebook, where it has been viewed over 136 million times.

3. After neighbours complain about kids playing soccer, cops respond in the best way

Officers from Birmingham, Alabama, decided to join in on a game of soccer organized by local kids last week. Their friendly match came after the officers had received several complaints filed by neighbours who did not want the kids playing soccer in the parking lot of a nearby tractor company.

“We get calls repeatedly on these guys playing and there’s one person who continually calls and kind of wants us to tell them to come inside. I’m not going to do that. Ethically, I can’t tell children to stop playing,” said officer Jordan Burke. The officers were getting tired of the complaints and wanted to encourage the kids to keep playing by joining in on the fun themselves. Officer Burke posted a video of the soccer match on Facebook with the caption:

“Please stop calling the police telling us to tell children to stop playing outside. This will be the result every time.”

Charlie Linville has climbed Mount Everest with only one foot. Linville is a U.S. combat veteran. In 2011, he was seriously injured after an explosion went off while he was on duty in Afghanistan. After several failed attempts at rehabilitation, Linville chose to have his foot amputated. Right after the surgery, Linville wanted to challenge himself. So, he decided he was going to climb Mount Everest and last Thursday he achieved his goal.

5. Determined teen with cerebral palsy walks for the first time during grad ceremony

Oklahoma teen Micah McDade was born with cerebral palsy. He has been using a wheelchair for his entire life but for his high school graduation, he was determined to walk across the stage. McDade went through months of physical therapy to strengthen and improve his walking skills. On Friday, he got out of his wheelchair and walked across the stage at Okmulgee High School’s graduation ceremony as the crowd burst into cheers and applause.

6. Little boy reads to shelter dogs so they don’t get lonely

Jacob Tumalan is helping shelter dogs by reading to them. The six-year-old, who has autism, makes a visit to his local animal shelter in Gardena, California, every week. According to his mother, Katie Tumalan, Jacob’s reading skills have improved immensely and the dogs have helped him come out of his shell.

“My son has always had a big problem with loud noises and a lot of activity around him. When he’s there, he looks like he’s pretty focused and he could block a lot of that out. At times he’ll cover his ears, but he stays in tune with the dogs while reading his books, so that’s pretty awesome to me,” Tumalan told Yahoo.

After Freddy the tortoise’s shell was destroyed in a bushfire, a group of Sao Paulo-based vets known as the “Animal Avengers” got together to help her out. They constructed a new shell for Freddy using a 3D printer. The new shell is made out of four interlocking pieces that were painted and put together. Freddy is doing well and the Animal Avengers say she loves her new shell.

A few weeks ago, 99-year-old Victor Marston was diagnosed with a cancerous tumour on his lower bowel. The World War Two veteran was immediately taken to hospital to receive an emergency surgery. The tumour was successfully removed and Martson is now the world’s oldest person to beat cancer. 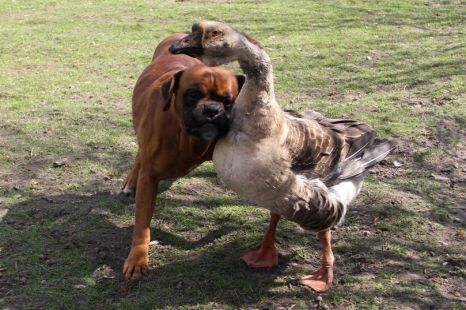 Buttons the goose has a special relationship with Bak the boxer dog. Bak is blind, and Buttons acts as his “seeing guide goose.” Buttons honks and this lets Bak know where to go. The animals’ owner Renata Kursa took Bak in after he was abandoned and left blind in a car accident. She says that Buttons lifts Bak’s spirits and pals are inseparable.