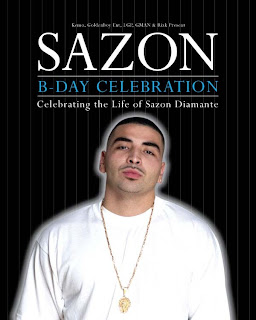 Sazon Diamante (brother of DJ Kemo of the Rascalz) was a veteran and a rising star in the Vancity hip-hop scene. Sadly we were unable to see how far his star would’ve have risen as he was taken from this planet too soon. Tomorrow night is a party to celebrate his birthday.
Here is the info on the party:

Go Getters & Frontline team up for this Vancouver tradition. A Birthday tribute to the late Sazon Diamante. This will be a special night as we pay homage to one of the brightest MC’s Vancouver ever saw, as we party in his memory and keep the memory, and vibe positive. This night will be filled with tons of Guest djs and a bunch of local Artists stopping through to pay their tributes, as well the night will be hosted by Vancouver’s own Checkmate & Concise.

The event will be hosted by VanCity’s own Defenders of the Faith (Checkmate & Concise)
http://www.defendersmusic.ca

Here is some information on the man:

SAZON DIAMANTE 1978-2001 Born 1978 in East Vancouver B.C. David “SAZON DIAMANTE” Bahamonde. Lived a life full of love and passion. Mostly for playing soccer and music. Latin music and especially Hip Hop music. The youngest of 3 brothers born to recently imigrated parents from Chile S.A. Sazon had alot of positive influences from his older brothers and his friends. He came up listening to and collaborating with many local hip hop enthusiast. RASCALZ, DOUBLE UP RECORDS, CHECKMATE & CONTENTS UNDER PRESSURE (BBoy crew).

David loved hip hop and all its elements, but he felt the most passion for writing rhymes and moving crowds. Circa 1995 Sazon connected with 1ST aka PRIMERO to form a group named NITWITS, Later to be called SICKWITZ. Sazon recorded many demos and performed a few local shows opening up for the likes of The ALKAHOLIKS & XZIBIT. Tremor records (local indie label) Invested interests into Nitwits and filmed a video for a song named “Then Theres nada” which recieved minimal spins on Much Music due to the fact the project was under funded from the now defunkt label.

Sazon continued recording songs with Primero but then later proceeded to record his own material on his own time with older brother DJ KEMO (Rascalz). Moving at his own pace , Sazon never took the rap game too serious and was more content playing soccer and delving into his studies in school. In 2000 Sazon recorded the now classic song “La Calle” with toronto rapper DON PRIMO. Later to be released as the b-side for Don Primo’s 12″ “Crazy Loco”. Soon before the 12″ release Sazon passed away. A year later Sazon had his only few solo songs which he recorded before his un-timely death released on cd and 12″ singles. The 3 songs featured on the single are …”Por Supuesto” which is a concious and polictical song set to a latin cumbia rhythm, where Sazon speaks on the upliftment of all latinos living in an oppresive North American society. Also on the single is remix for “La Calle” where Sazon can be heard flowing magnificently over a west coast funk sound, And “Sign of the Times” which was finished after his passing with a featuring from good friend CONCISE THE BLACK KNIGHT , both spitting sick verses to some real hip hop Shit.

Sazon’s memory lives strong through his music and our memories.