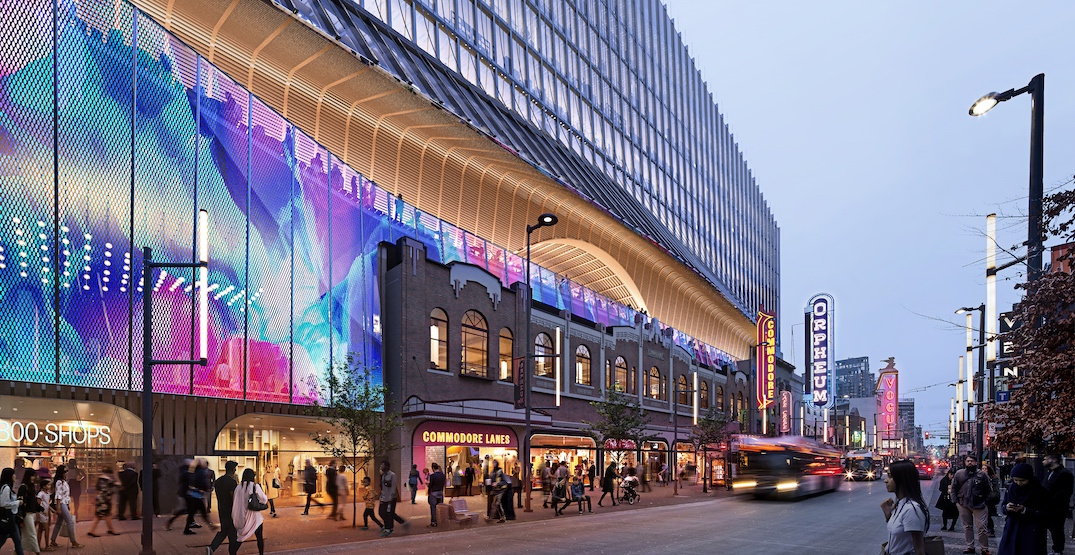 The proponents of the 800 Granville Street block redevelopment are holding public consultation on their transformative proposal this month.

A formal application for the project to the municipal government has yet to be submitted, but property owner Bonnies Properties and architectural firm Perkins & Will are seeking feedback on their intent to help revitalize the Granville Entertainment District with a critical mass of new office, retail, dining, and entertainment spaces.

As first reported by Daily Hive Urbanized earlier this year, this would be a redevelopment of the east side of Granville Street between Robson Street and north of the Orpheum Theatre entrance, with the full incorporation and preservation of the mid-block building that houses the Commodore Ballroom and Commodore Bowling & Billiards.

The Commodore building would be preserved in its entirety by constructing a structure that forms a bridge over the entertainment venue. There would be back-of-house and accessibility improvements to both the Commodore Ballroom and the adjacent Orpheum Theatre. 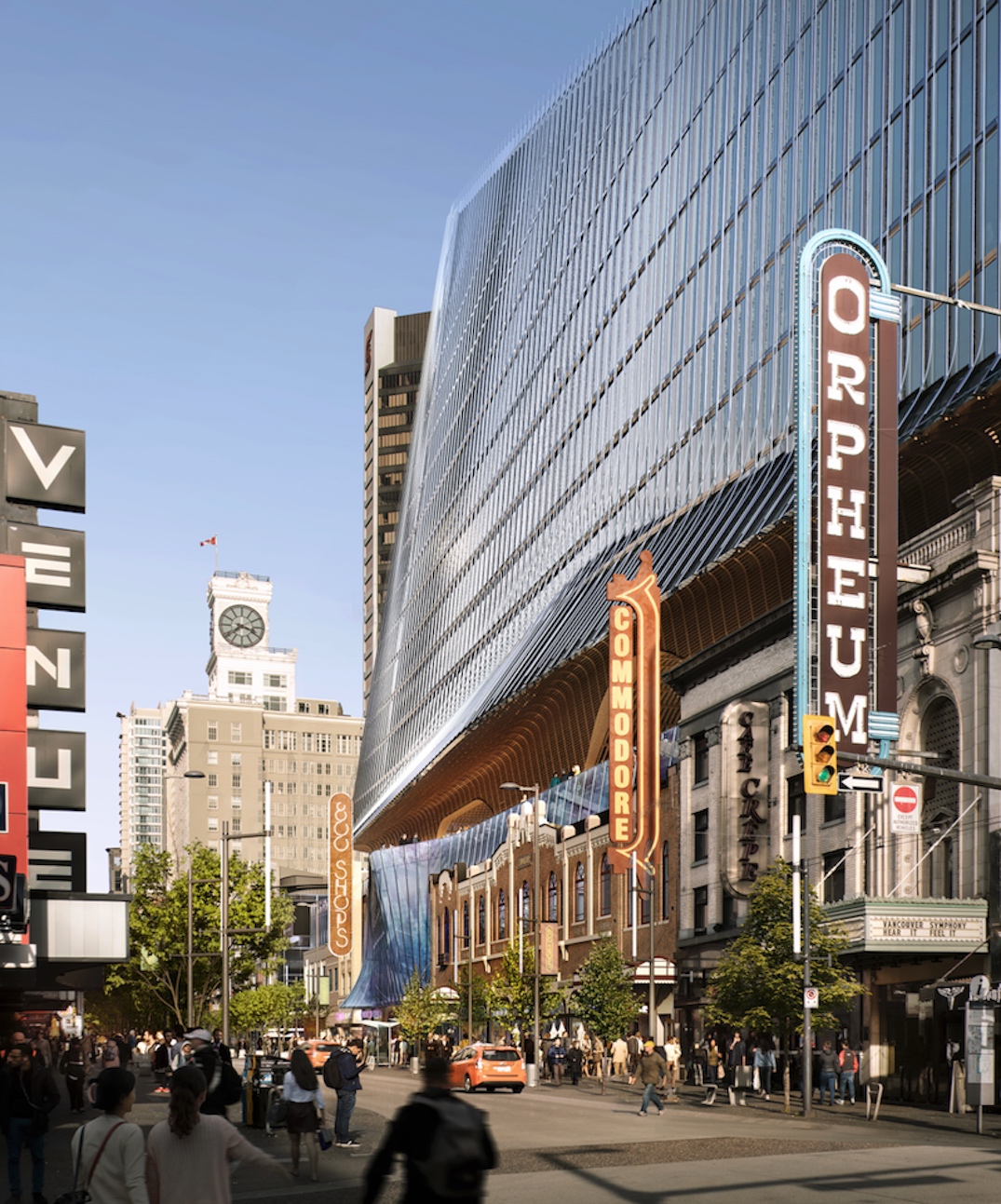 Additionally, as a developer-funded public benefit, the proponent intends to build a new additional 14,700 sq ft performance hall worth about $45 million. This will be a city-owned venue upon completion.

All of these improvements to the Commodore Ballroom and Orpheum Theatre, as well as the new performance hall, will increase attendance and improve the long-term viability of the venues.

As a result of the upgrades, both the Commodore Ballroom and Orpheum will be able to host more events, increasing the annual attendance at each venue by about 75,000 attendees.

Overall, this commercial-only redevelopment would create 377,100 sq ft of office space within the upper levels, 86,300 sq ft of retail and restaurant space within the lower levels (double the existing area), and 78,165 sq ft of entertainment uses (an 85% increase). 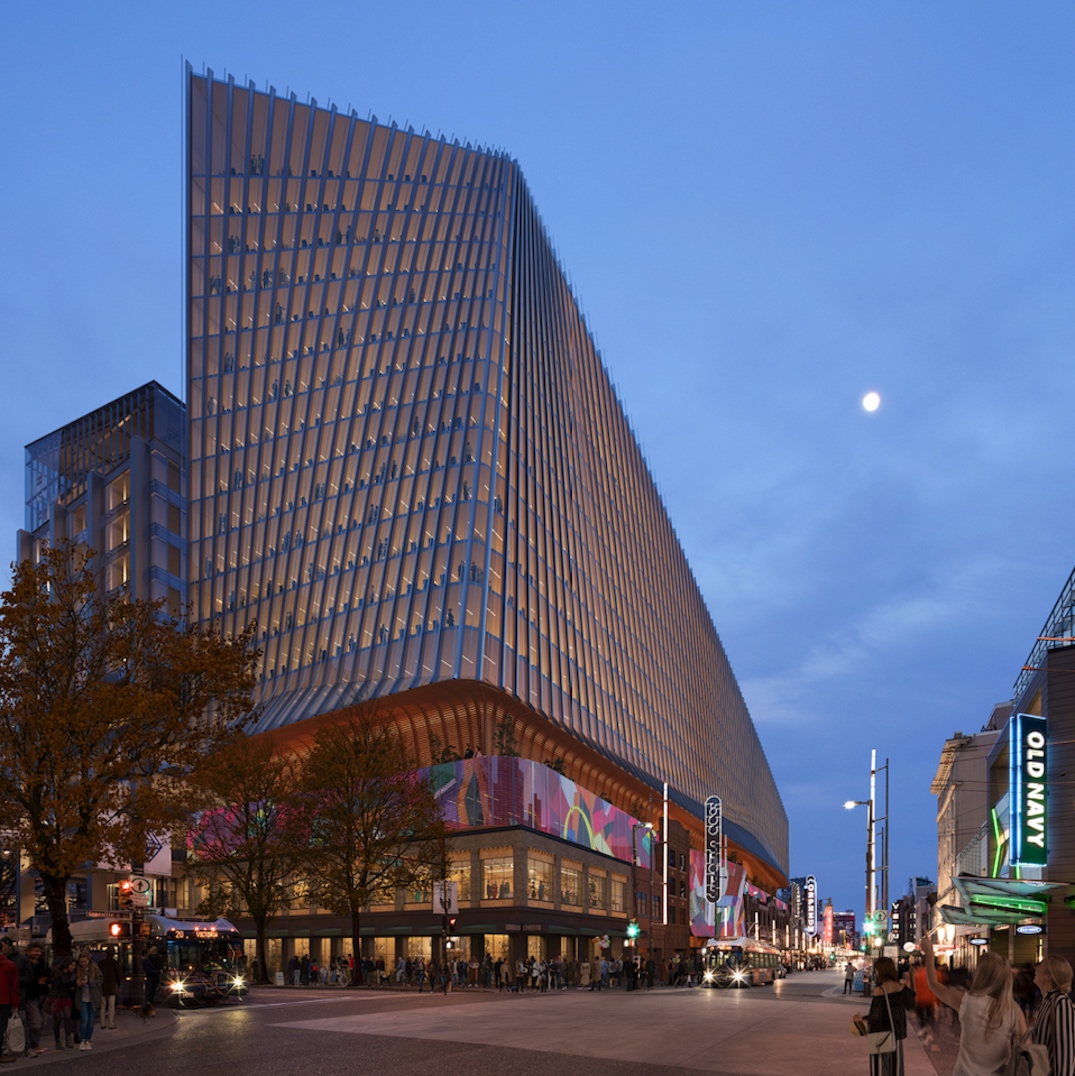 “The Bonnis family has been invested in Granville Street for decades and we are passionate about the continued success of this city and the Granville Strip. For us this is the culmination of 21 years’ work, assembling the land, coordinating leases, bringing together a team, and preparing a proposal that will help to transform Granville Street and propel it into the 21st century,” said Kerry Bonnis of Bonnis Properties in a statement.

“This proposal is especially important for us because it means that some of the venues that have meant so much to us throughout our life will remain for future generations to enjoy. For us it has been a labour of love – but we also feel a huge sense of urgency – Granville Street and our arts and culture industries badly need this investment.” 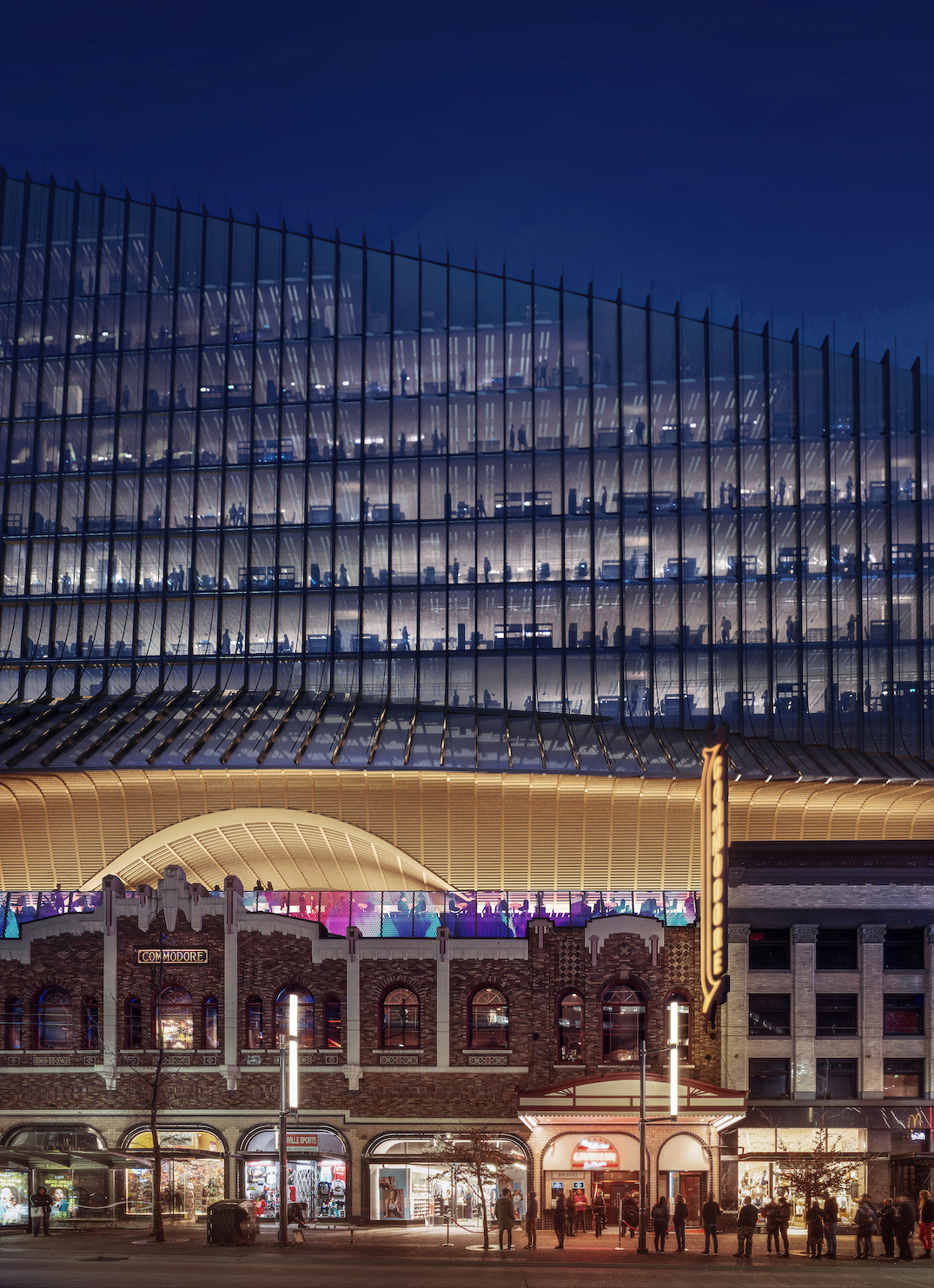 The construction activity would provide major economic spinoffs over the short to medium term, and when complete it would be an economic engine for downtown.

Later this decade, the critical mass of the office component could bring up to 4,000 office employees to the site. When foot traffic from the office, retail, restaurant, and entertainment components are combined, this single project has the real potential to provide a much-needed economic anchor for the entertainment district.

“Granville Street is in desperate need of revitalization and this is just the kind of project we need to kickstart things again after the pandemic. Hotels need this, shops need this, restaurants need this, the nightlife needs this — anything to bring people down here and help bring Granville Street back to what it can and should be,” said Jasmine Mooney, the director of marketing and events of the nearby Hotel Belmont.

“There is so much potential on Granville and this project is a total no-brainer to me. There is no reason this development shouldn’t move ahead, and as soon as possible.” 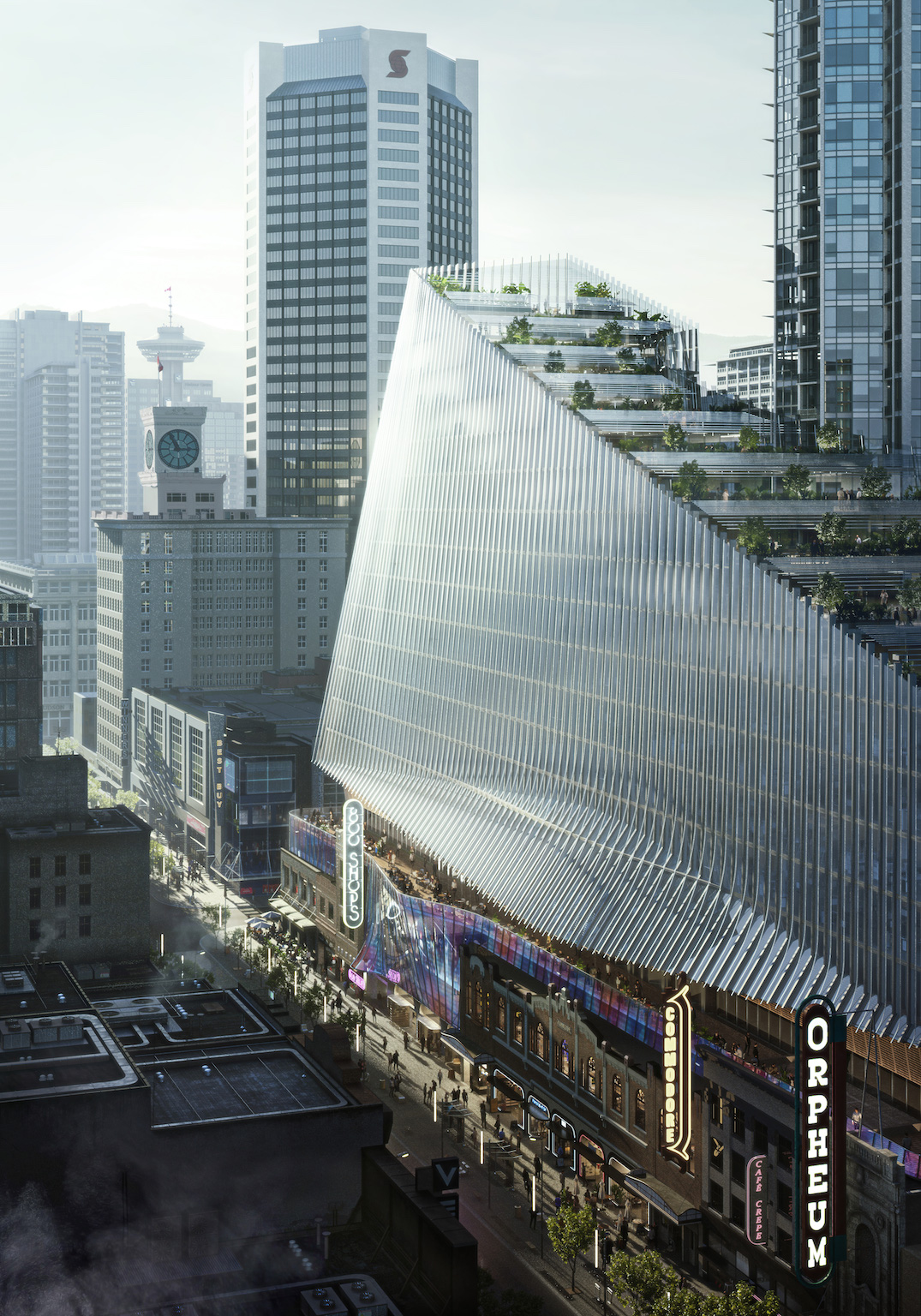 Bonnis maintains that if they are unable to proceed with this project now, they will engage in long-term leases for the existing properties, and the opportunity for such a redevelopment would be lost for at least another generation.

Two public open house webinars will be held on Thursday, April 22 at 10 am and then again at 6 pm. A brief online survey is now also open.