As Canadians, the word “sorry” just naturally rolls off the tongue, kinda like “poutine” or “chesterfield”. And lately, no one is more familiar with the term than our very own Justin Bieber.

The pint-sized heartthrob, who brings his Purpose World Tour to Rogers Arena Friday night, has been on a bit of an apology spree as of late. In the last year, Bieber poked fun at himself at a Comedy Central Roast and appeared on Ellen to apologize for his recent mess-ups (we’ll get to those in a minute). He even scored a huge hit called “Sorry”, the video for which has been seen more than a billion times on YouTube.

Granted, it’s been a rough couple of years for the Biebs. After selling millions of records and breaking millions of hearts at the beginning of this decade, Justin took a break from recording studio albums in 2012 to focus on his other passions – drag racing, egging houses, and his burgeoning street cred.

The singer’s antics tested the patience of even his most loyal fans – in 2014, more than 270,000 people signed a petition to deport Bieber back to Canada. The White House officially responded to the initiative, saying “Sorry to disappoint, but we won’t be commenting on this one…but we’re glad you care about immigration issues. Because our current system is broken.”

So is it too late to say sorry now? Probably not. Justin’s long-awaited 2015 LP Purpose became his fastest selling album ever and has already spawned three No. 1 singles (so far). The singer also won his very first Grammy last month and tickets for his world tour are virtually sold out.

But before Bieber graces the Rogers Arena stage, we’ve compiled a short list of the various offences the superstar should apologize for. We don’t want to be too rough on the little guy so we’re giving him a pass on the small stuff (a list which includes, but is not limited to: his use of a wheelchair at Disneyland to skip lines, peeing in a jailhouse mop bucket, having his bodyguards carry him to the top of the Great Wall of China on their shoulders, and his 2015 “baptism” in a NYC bathtub).

Last year, nosy paparazzi literally caught Bieber with his pants down while he vacationed in Bora Bora and the nude photos immediately broke the internet. Bieber’s father Jeremy did what any good dad would do – he took to Twitter to chime in on the chaos. 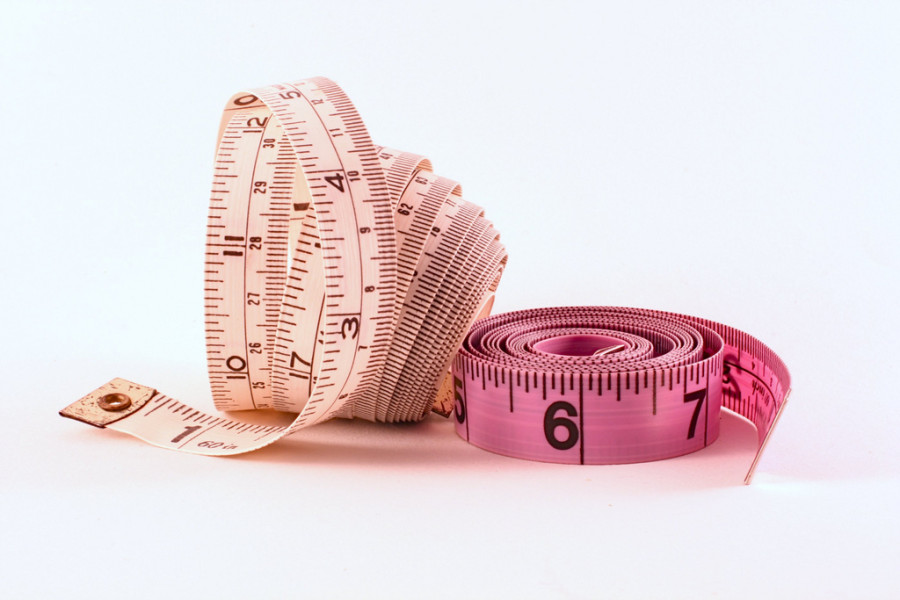 Taking time out from his job as an unofficial Ed Hardy model, the elder Bieber tweeted “@justinbieber what do you feed that thing” followed with the hashtag #proud. And just like that, the internet broke again. Once the controversy cooled down a bit, Justin threw his support behind his father and called the tweet “hilarious”.

Thanks for making us all look bad, dude. In 2014, Bieber was arrested for DUI, drag racing, and resisting arrest. According to the police report, the singer had “bloodshot” eyes and appeared to be in a “stupor”, but you’d never guess it from his gorgeous mug shot. All those years of being a pitchman for Proactiv clearly paid off, as Bieber looks as if he’s ready to grace the pages of Marie Claire. By comparison, google “mug shots belonging to James Brown, Nick Nolte, and Joyce DeWitt” to see how it’s supposed to be done. 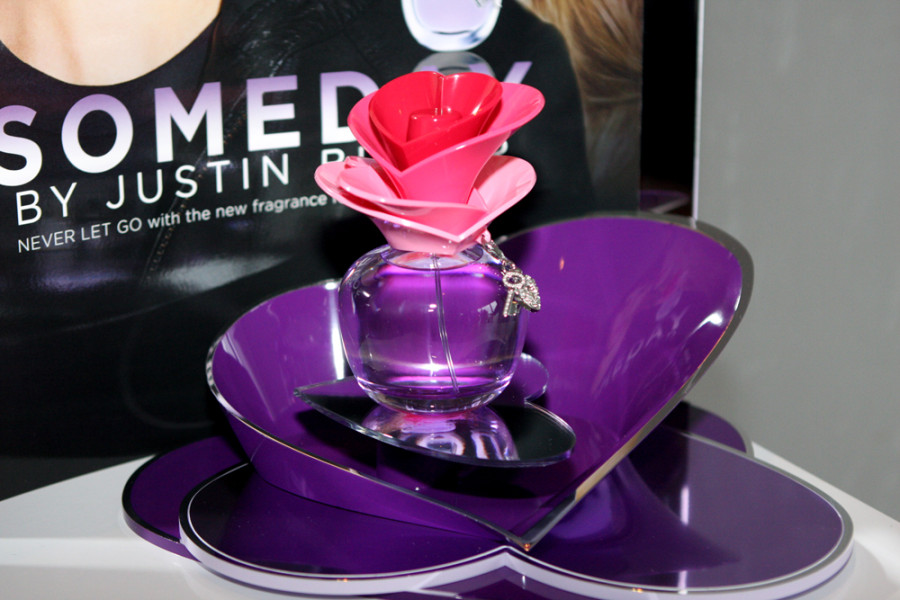 For someone who isn’t a fan of the paparazzi, Bieber certainly doesn’t mind having his handsome mug plastered all over goodies in his online store. Currently, fans can purchase hoodies and tank tops with the singer’s grown-up likeness on it, but his official site used to carry atrocities like singing dolls, dental floss, perfume, and life-sized cardboard cutouts of Bieber (in two different poses, no less). One man’s trash is another man’s treasure, apparently.

4. Spitting on his fans

What started out as a punk-ass tribute to Eva Peron quickly turned into chaos last year, when Justin Bieber was filmed spitting on fans while they cheered for him underneath a hotel room balcony in Toronto. A rep for Bieber quickly denied the story, saying that Justin loves his Toronto fans and even “played them some of his new music”, which is almost as bad as the spitting, no?

In 2013, Bieber performed double-duty on Saturday Night Live as both host and musical guest. The singer breathed zero life into the episode’s sketches (a parody of Grease that featured an embarrassed-looking Cecily Strong is a season lowlight) and annoyed the cast and crew with his diva-like behaviour behind the scenes.

SNL star Bill Hader told the New York Times that he “really didn’t enjoy having Justin Bieber around” and later told Howard Stern that the singer’s entourage included a guy whose job it was to hold Bieber’s Diet Cokes and pizza slices. SNL has had its ups and downs over the years, but leave it to Bieber to out-stink notoriously bad episodes hosted by Nancy Kerrigan, Donald Trump and O.J. Simpson.

6. Abandoning his pet hamster in Atlanta

During a super slow news cycle in 2012, Justin Bieber made headlines after giving away his beloved hamster PAC to a screaming fan outside of a concert. Bieber was called out by the California Hamster Association (we Googled it – it’s a real thing) who said the sudden hand-off was “likely the moment (PAC) gazed at the short path to its doom.” Sadly, the hamster quickly began losing his fur and after just three months in his new owner’s care, he left this world to run circles in the giant hamster wheel in the sky.

7. Abandoning his pet monkey in Munich

At least Friends‘ Ross Gellar had the decency to give his monkey away to the San Diego Zoo. Shortly after the death of PAC, Justin Bieber received a capuchin monkey as a birthday present and took the little guy on a trip to Germany. Upon arrival into the country, the monkey, named OG Mally, was seized by customs officials and placed on quarantine. After two months, Bieber still hadn’t come forward with documents to retrieve OG Mally and was fined $8,000. 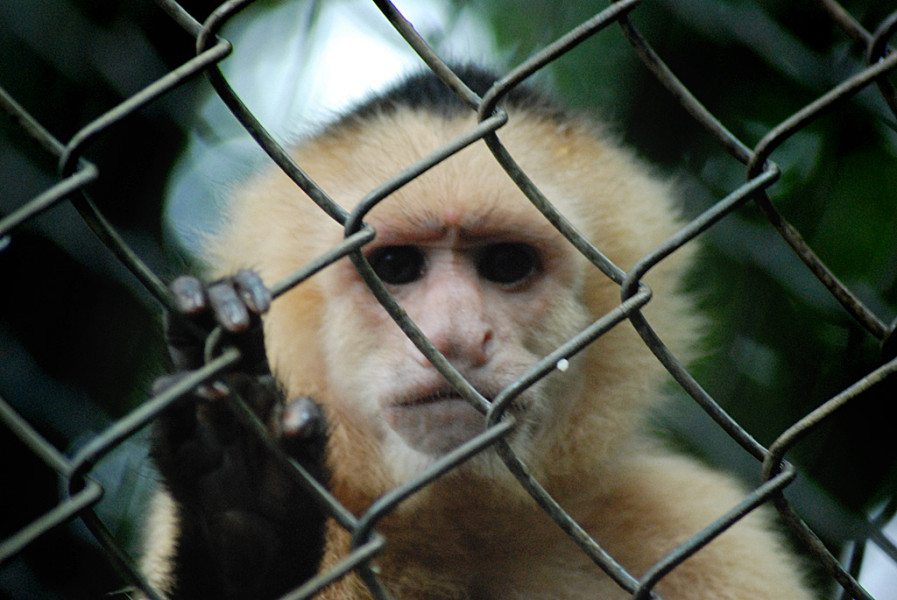 But that’s the old Justin – the newly reformed Justin is clearly remorseful about the monkey business. As he said to GQ earlier this year, “If you could get a monkey, well, you would get a fucking monkey, too! Monkeys are awesome!”

The cheapest seat in the house for Bieber’s show on Friday is $57.75 – that’s nearly twice the price than the cheapest ticket for Demi Lovato’s upcoming Vancouver show. The real crime is the $2,647.25 (plus taxes and service charges) that Bieber is charging for the honour of meeting him before the show. But to be fair, the price includes a ticket in a barricaded section next to Justin’s stage so anyone can feel like one less lonely girl for a couple of hours. By comparison, $2647.25 will buy you roughly 223,960 yards of Justin Bieber dental floss from Amazon.ca, or 203 hamsters from PetSmart.

A handful of tickets for Bieber’s Vancouver show are available for purchase here, and if the setlist below is any indication, his fans are in for an epic night. Oh wait – he’s doing “Baby”, so we’ll take an apology for that, too. 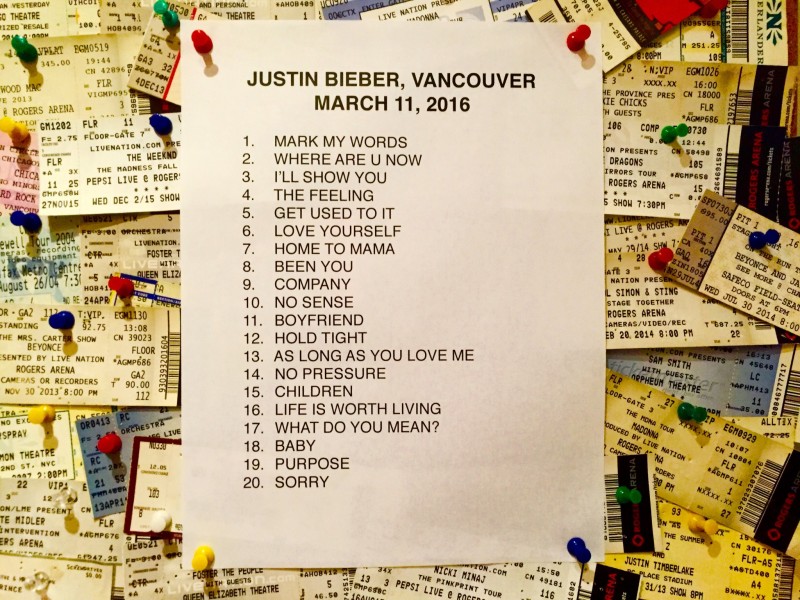