You might not want to admit it yet, but it’s time to rebuild.

Lets be realistic. The Stanley Cup isn’t coming to this city this year and it isn’t likely to come next year either. The Canucks likely need to wait until their young prospects (Bo Horvat, Hunter Shinkaruk and Brendan Gaunce) develop, which could take 2-3 years, to start pushing for another chance to win it all. So why kid ourselves?

When you go around calling yourself “Rob The Hockey Guy,” you elicit a lot of questions from your friends at a time like this. Lately I have been getting a lot of “what’s wrong with the Canucks” and “what are they going to do?”

The quick answers are they just aren’t good enough (although injuries are making them look even worse) and they need to get younger. It’s now painfully obvious that the core group that came so close to winning it all in 2011 can no longer be counted on to make the Canucks into a contender. They have to change the mix and they have to get younger. Unless someone finds the fountain of youth, the Canucks core isn’t likely to get better in the next few years given their ages:

That’s right, the young man in the group still remaining from the 2011 run is Alex Edler and he is no spring chicken anymore. 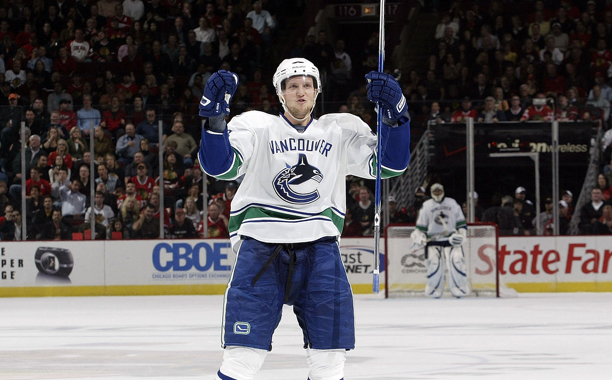 The Canucks need to rebuild. No, I’m not talking about following the Edmonton Oilers model here (they might not be able to if they tried given the amount of no-trade clauses on the team). I would like to follow the Philadelphia Flyers model in 2007.

The Flyers had a 101 point season in 2005-06 but had a nightmare of a season one year later. They finished with a league-worst 56 point season in 2006-07 and had a fire sale. They traded an aging Peter Forsberg to Nashville for two young players and two draft picks. They flipped Alexei Zhitnik for Brayden Coburn and dumped many of their veterans for whatever they could get. The result was a boatload of cap space which they used to sign Danny Briere, Kimmo Timonen and Scott Hartnell. Essentially they traded veterans for young players and replaced those vetarans through free agency and astute trades. The Flyers made the playoffs in 2007-08 and even made a run to the Eastern Conference Final.

So what’s my solution? Start making moves. With Wednesday’s trade deadline fast approaching (and Daniel Sedin potentially injured for at least 3 weeks), the time for action is now. Here are 8 steps to rebuild the Vancouver Canucks. This is a little bit pie in the sky because you can never be sure of what other general managers will offer, who will waive their no-trade clause and what players will be willing to sign in Vancouver during the offseason, but I tried to keep it as realistic as possible.

1. Trade Ryan Kesler: I think Kesler is an excellent hockey player, but he is injury prone and his production is likely to diminish in 2-3 years as he exits his prime years. Most importantly, he is willing to waive his no-trade clause and will garner a significant return. Trade Kesler to Philadelphia for Brayden Schenn or Sean Couturier as well as a good prospect and a first round draft choice and it will kick start the rebuild.

2. Trade Alex Edler: Alex Edler is a player with a lot of promise and a lot of talent, but he is a player that the Canucks don’t need. What we see with Alex Edler is what we get. He is a solid #2 or #3 defenceman who doesn’t fit-in well with the current Canucks’ coach. The Tortorella effect might be enough to convince him to leave and he should still reap a big return given what he has accomplished in his career. The Canucks looked into trading Edler last spring, with Detroit apparently willing to put together a package of young players that resembled Brendan Smith, Tomas Tatar, and Riley Sheahan. If the package is just Smith and Tatar, I pull the trigger.

3. Trade Roberto Luongo: I realize that I am now suggesting to trade Luongo and Kesler in the same article, so I hope I don’t have to join the witness relocation program after this gets published. I’m a Luongo fan, but he is going to turn 35 years old this year and isn’t likely to get better in the next few years. There’s no guarantee that any team wants his contract yet (though the cap is going to go up next season), but if they can find a taker they should put Lu out of his misery no matter what the return.

UPDATE: Mike Gillis has listened to me, Shawn Matthias and Jakob Markstrom are on their way to Vancouver. 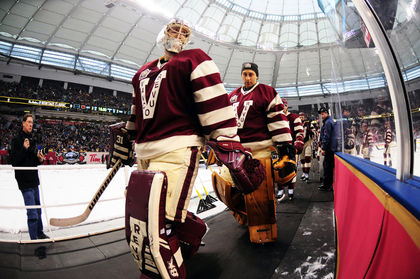 4. Re-Sign Mike Santorelli: I don’t want to trade the entire team, ok? I have been beating this drum for a while, but it’s time to re-sign Mike Santorelli. I was singing this tune back in early December and Santorelli’s value might be even more evident today. Santorelli played at centre and on the wing, played on all four lines, played on the penalty kill and power play, and was one of their best shootout options. He’s also only 28 years old.

5. Trade Jannik Hansen: Ok, back to cleaning house. Hansen is a player that has been a favourite of mine in the past but he hasn’t fit-in well with John Tortorella. He has become a tweener, not big enough to be really physical and not talented enough to play on their second line. Tortorella doesn’t even use Hansen on the penalty kill very often anymore. Get the best draft choice possible for Hansen and move him before his no-trade clause kicks in.

6. Shutdown and Buyout David Booth: I don’t think I have to explain myself here. David Booth has been a disappointment in blue and green and has one more year left on his contract at $4.25 million. The Canucks have one more compliance buyout to use this offseason and they should shutdown Booth immediately to ensure he doesn’t get injured (and becomes ineligible to be bought-out).

7. Sign Jaroslav Halak: With Luongo gone, the Canucks will need someone to share the crease with Eddie Lack. Luckily this is an excellent year to be shopping for a goalie. Jonas Hiller, Ryan Miller and Jaroslav Halak will be unrestricted free agents on July 1st. The Canucks may have the inside track on Halak because of goalie coach Rolie Melanson, who coached Halak in Montreal.

8. Sign Paul Stastny: Stastny isn’t a perfect hockey player, but he has skill (46 points in 55 games) and youth on his side (he’s only 28 years old). As a UFA, they might have to overpay for his services, but at least it will be for a player in the prime of his career. Stastny would centre the Canucks’ second line and help run their second unit power play.

The above list represents somewhat of a dream scenario to fast track a rebuild. It would give the Canucks a competitive lineup next season that could make the playoffs and re-stock their prospects cupboard (a prospect and two draft picks for Kesler and Hansen).

Here is what my team would look like, accounting for $5 million in extra cap space (keep in mind that young players like Bo Horvat, Hunter Shinkaruk, Brendan Gaunce and Nicklas Jensen could force their way onto the team):

The Canucks would get a whole lot younger and not a whole lot worse, if you ask me. Halak is probably a downgrade on Luongo (at least in the short-term) and Paul Stastny isn’t the complete player that Ryan Kesler is, but the injection of youth and potential into the lineup would do wonders for their future.

And if there’s one thing I’m craving for this franchise, it’s a bright future.