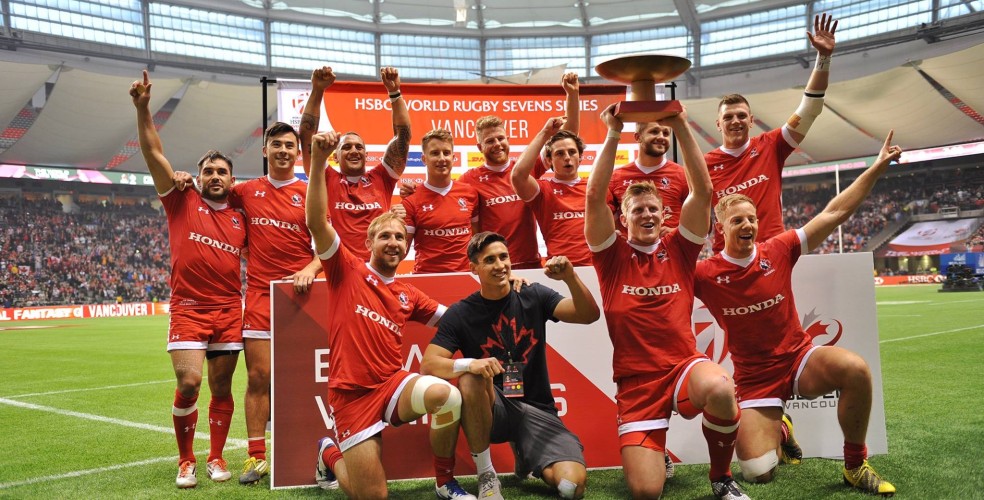 The World Rugby Sevens Series made its first stop in Vancouver over the weekend and it couldn’t have gone much better.

It was a remarkable two-day event that Vancouver embraced, despite the fact that the sport was mostly an unknown commodity in this city.

“There’s a lot of people who probably never watched rugby before that are here and hopefully we made some fans out of them” said Nathan Hirayama, who scored 6 tries for Canada on the weekend.

“Hopefully they’re coming back next year.”

After what we saw at BC Place, I don’t think there’s any doubt about that.

#Lego my eggo check out these #SoFancy fans! Enter to win 4 tickets to the Prop house (VIP After Party of #Canada7s by tagging 3 friends with the hashtag #SoFancy!

Even if you still know nothing about Rugby Sevens, you know about ‘fancy dress’. Downtown Vancouver was filled with some of the most ridiculously hilarious costumes all weekend.

The costumes added to the party atmosphere that engulfed BC Stadium for two straight days.

Most Vancouverites, including yours truly, knew virtually nothing about Rugby Sevens before Vancouver was awarded this event.

We heard how good it was going to be and how exciting the sport was. It came as advertised.

Speaking for myself, I was immediately hooked.

The game is fast paced, the hits are hard, and the scoring is frequent. Basically it takes everything I love about Rugby Union and removes everything I don’t like about it.

And the best part? The tournament is coming back next year.

As violent as rugby can be, it really is a game played by gentleman.

Players could not have been more humble and down to earth all weekend.

In an age where pro athletes can carry an ego the size of BC Place, it was refreshing to see how rugby players conduct themselves.

Canada entered the tournament in 12th place in the World Series standings. They finished in 9th this weekend, despite the fact that they went 5-1 in the tournament.

The two signature moments for Canada were the wins against Australia and France, both coming on the last play of the game.

The win against the eventual semifinalists from Australia was the most surprising. Here’s Adam Zaruba’s game tying try, followed by Nathan Hirayama’s game winning conversion.

And the win against France in the Bowl Final earned them some hardware. Here’s the dramatic final try by John Moonlight.

If you knew nothing about Rugby Sevens before this weekend (*raises hand*) then you were probably surprised by the representation from Fiji.

Not only did Fiji have the most supporters at BC Place, other than Canada, but they may have had the most exciting team on the pitch.

Though they failed to make the semis, they’re still in 1st place in the World Series standings. Not bad for a small island nation of less than a million people.

Unlike Rugby Union, where New Zealand performs the Haka before matches, in Sevens the All Blacks only perform this tradition if they win the tournament.

Luckily for anyone that wanted to see it, they did just that.

The greatest honour, traditional Haka performed by cup winners @nz7s right here at #Canada7s, not once but twice! pic.twitter.com/xR9Yx85dCI

Pandemonium at @bcplace as #Canada7s win on last play of the game. They win the Bowl Final. pic.twitter.com/PZcZULAzXC

This was not a sleepy Rogers Arena crowd.

It was louder. Much louder.

“The crowd here has been the loudest I’ve ever heard” said North Vancouver’s Adam Zaruba, who played on Canada’s Bowl winning team.

Before leaving the pitch after their last game, each team did a tour around the stadium to thank the fans. It didn’t matter if it was the last place team, or the first place team. Each section of the stadium would stand and applaud their effort as they came around.

I can’t wait for next year.