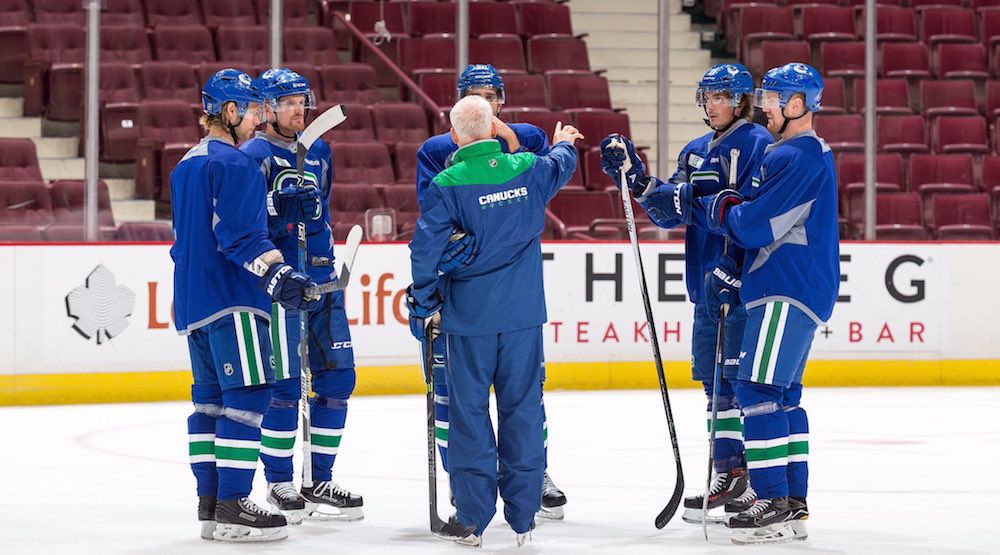 It’s been an up-and-down start to the 2016-17 season for the Vancouver Canucks.

First they were up.

After a 4-0 season that had people muttering “hey, maybe they’re not that bad,” they’ve rattled off five consecutive loses. Now those same fans are likely muttering “here we go again.”

Still, the Canucks actually have a fairly respectable record after nine games. They’re 4-4-1, which is good enough to have them in a playoff spot at the moment. Given the look of their roster, maybe we should calm the fire-the-coach calls until we reach at least the third week of the season then?

If the Canucks had alternated wins and losses, rather than two drastic streaks to start the year, we’d likely be viewing this team differently. But as it is, the Canucks are on a five-game losing streak and are desperate for a win as they embark on a six-game eastern road trip – their longest of the season – in just nine days.

If things don’t begin to improve, the alarm bells will sound, if they haven’t already. They went 1-4-2 on their first long road trip of the season a year ago. If something like that happens again, rightly or wrongly the Willie watch will indeed kick into full gear.

"We had chances to score more goals than we did, so that's a positive to take away. We couldn't score – that's the difference" – H. Sedin

Early on, the Canucks boasted about a new system that they’ve employed this season. It’s a system that was designed to limit opposing teams, which is a good idea because they gave up the second-most shots against in the league last year.

Mission accomplished, they’ve improved to ninth-best at suppressing shots and are a respectable 13th-best in the NHL in goals against.

One problem: they’re not scoring goals.

Whether it’s a function of their new system or not, the Canucks have had a heck of a time scoring this season. They’re averaging just 1.78 goals per game, which has them dead-last in the NHL, well behind the LA Kings at 2.11.

This isn’t just a function of their impotent power play, either. They’re second-last in goals-for at 5-on-5.

#Canucks lose at home for the 1st time this season. 3-0 to the Sens. Vancouver managed just 3 shots in the 3rd period.

Maybe they’re just up against some great goaltending you say? Not so much.

Vancouver is generating just 25 shots per game, which is again, good enough for dead-last in the NHL.

Keep it up & it's draft lottery time.

Knowing what we now know about advanced stats, you can take a wild guess about Vancouver’s possession metrics given their shot-generating woes.

They’re fifth-worst in the league in even strength Corsi so far, which is an indication that this team has not been unlucky. They’ve just been bad.

Not included in possession metrics is the play of the Canucks with the man advantage.

I’m sorry that I don’t have better news for you in this regard as well.

Vancouver has the second-worst power play percentage (10.7%) in the National Hockey League. What’s worse? They’ve given up a shorthanded goal already too.

They have three goals for and one goal against with the man advantage.

Hands up who's seen enough of the Sbisa/Larsen D pairing? #Canucks

After a good year in the KHL, Philip Larsen was not only signed to a contract by the Canucks, he was gifted a spot as the team’s power play quarterback.

While it may seem a bit harsh to put too much blame on him – the Sedins, as the best players on the team, have to share in the blame of course – he’s taking up a very important spot.

Larsen has been given a good look, and it hasn’t gone well. He has been reluctant to use his shot from the point, and when he has used it, he has missed the net a lot.

Troy Stecher outplayed him in preseason, and is proving it’s no fluke in the regular season. That’s been the case both at 5-on-5, where he’s had to play against tough competition, and on the power play.

Stecher is more willing to use his shot, which is more effective than Larsen’s anyway. What’s also been impressive with Stecher is his ability to move around the ice, something that’s vital for a power play that has been too stagnant.

While giving the keys to the power play to a rookie d-man is unconventional, it looks like the right move in this situation.

Stecher was added to the first unit power play in the last two games, bumping Loui Eriksson – he of the six-year, $6 million contract – to the second unit.

Eriksson’s play has been very concerning thus far. Through nine games, the no goals (in the opposition’s net) and just four assists. To make matters worse, he has just 13 shots (on the opposition’s goal). He hasn’t been noticeable.

That’s simply not good enough for anyone receiving ample time on a line with the Sedins, never mind a 30-goal scorer from last season.

Eriksson’s still just 31 years-old, so he hasn’t dropped off a cliff. He’ll be better, but his team needs him right now.

Until then, the pressure will continue to mount.

7. Ice time for the kids

Virtanen doesn't need to learn tough lessons at the NHL level, he needs to play. Either put him in a position to succeed or send JV to Utica

While Ben Hutton, Bo Horvat, Markus Granlund, and Sven Baertschi have received consistent ice time, there is concern about the ice time for a couple of promising young players.

Jake Virtanen has already been a healthy scratch twice this season, and has seen time on the fourth line in favour of 29-year-old Jack Skille, who is still looking for his first point in Canucks colours (including preseason).

Nikita Tryamkin, meanwhile, is still looking to play his first game of the season, although it appears he will play on the upcoming road trip.

It’s not panic time for the Canucks yet, but they’re teetering on the cusp of it. If this five-game losing streak extends much longer, buckle up.