Tens of thousands of B.C. Hydro customers in the Lower Mainland are still without power as of Monday morning.

According to B.C. Hydro, a total of 60,000 customers in Surrey, Langley, Coquitlam, Vancouver, Burnaby, parts of the SFU Burnaby campus, Maple Ridge, Abbotsford and Mission do not have electricity. The adverse conditions caused by the arrival of the new storm system overnight has contributed to the delays and new small outages. 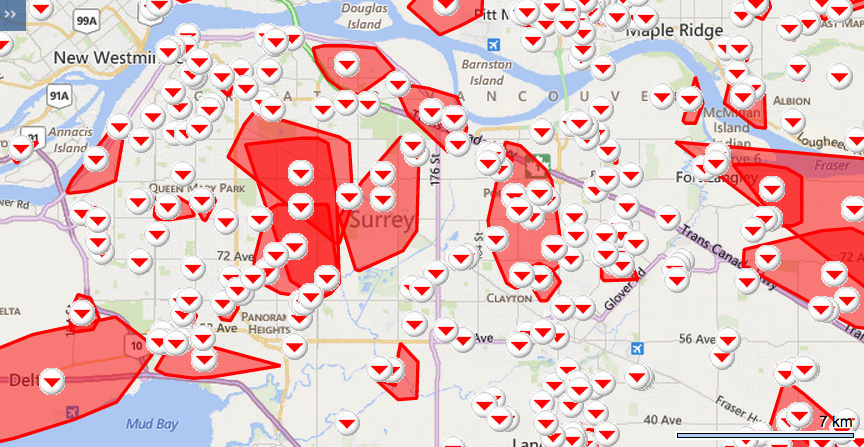 Crews restored power to another 100,000 customers since Sunday evening, but it is anticipated that some affected areas will not see their power restored until Monday evening.

At the peak of the storm, 533,000 customers across the South Coast and Lower Mainland were without power.

Following Saturday’s storm, B.C. Hydro brought in crews from across the province to work on the Lower Mainland’s power restoration efforts. Approximately 400 people have been working around the clock to safely restore power since Saturday, and currently the largest number of crews are in Surrey. On Sunday afternoon, B.C. Hydro had originally anticipated to have all power restored by early Monday morning.

Maintenance crews with the City of Vancouver have also been working diligently to clear roads with debris from fallen branches and trees and restore power to traffic lights. Traffic lights were off at as many as 140 intersections on Saturday night after the storm swept through the city.

There has been at least one power outage-induced fire, caused by a candle. In Burnaby on early Sunday morning, firefighters responded to an apartment fire on 10th Avenue and Newcombe Street. Fortunately, the fire was extinguished quickly and did not spread across the complex.

Meanwhile, the new frontal system that has arrived has triggered a heavy rainfall warning from Environment Canada. Approximately 50 mm of rain is expected for the North Shore and area north of Lougheed Highway by late Monday afternoon, with lesser amounts for Vancouver and areas south of the Fraser.

Unlike Saturday’s storm, no high winds are expected today.

Adverse weather this morning has caused a couple of additional outages in the #LowerMainland. Work continues on previous and new damage.

@evilgeniuspreet Morning weather is causing additional small outages. Our largest number of crews are out in Surrey working to restore power

@DawnMoshonas Hi, crews working on substation feeder affecting large number of customers in Burnaby. No updates but will post when available