With all of the Oscar contending type flicks now released to the masses, it may appear there is a lull in quality entertainment at the cinema; but au contraire, mon frère. That’s french. Here is another edition of 6-Flick Picks for the month of February.

Actually, don’t even worry about necessarily going to one of the big box cinemas, instead there are some fantastic films showing this month at VIFF Vancity Theatre.

February may go down as one of the best months when it comes to picking six quality films. It’s especially a family friendly month. That said there are a couple of saucy films coming out just in time for Valentines Day. So go and grab your best leather, sit down and enjoy.

Some Oscar contenders that were on a limited release are just hitting Vancouver and will be playing at the Vancity Theater throughout February. The theater is also showing some Academy Award nominated live action and animated shorts, so now is your chance to see those before you take part in an Oscar pool. Go to Vancity Theater website and check their schedule.

Like always we will be reviewing most of these selections. Make sure to let us know if you agree or disagree with our reviews. Who doesn’t like a good nerdy cinephile debate? Just keep it clean. No eye gouging.

Song of the Sea 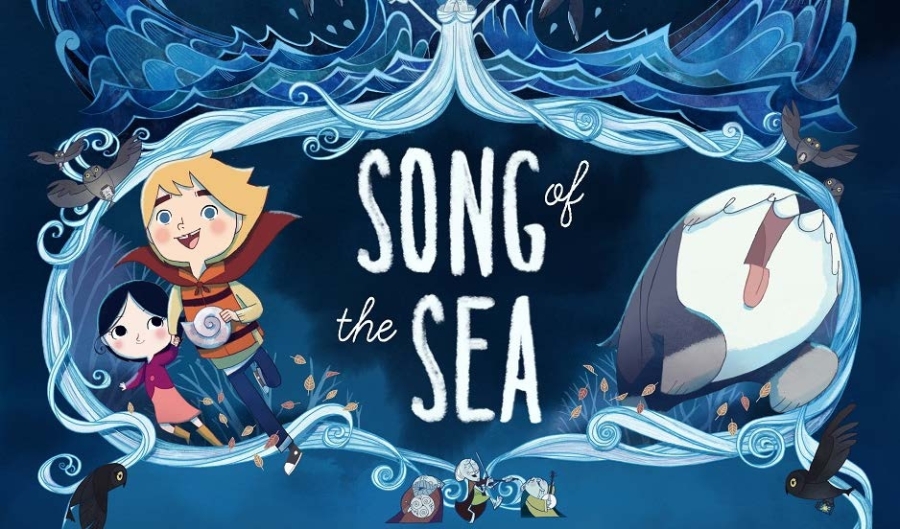 Official Synopsis: The story, based on the ancient Celtic myth of the selkie, concerns two children, Ben and Saoirse, who live in a lighthouse by the sea with their father, Conor, who remains distraught over the loss of his wife several years earlier. Though Ben is aware of the responsibility that comes with being a big brother, he is easily frustrated with Saoirse, who, at six years old, has yet to utter a single word. When Saoirse discovers a shell flute that used to belong to their mother, the spellbinding music she creates becomes both a means of communication and the key to a magical secret locked deep in their mother’s past. – Wikipedia

RATED G – for see I’m a good parent after all.

I included this film in my best of 2014 feature a few weeks back. It has done the full film festival rounds and has been nominated for Best Animated Feature at this year’s Academy Awards. It’s done by the same animation studio and director who did the award winning The Secret of Kells. If you haven’t seen that yet, I believe you can find it on Netflix.

Grab your kids on a rainy day and take them to what critics are calling an instant classic. How was that for a sales pitch?

Vancity Theater has specific showtimes here. It plays once a day starting on Friday, February 6 and runs on the 7, 8, and 9 and won’t play again until the following Saturday as a matinee on Valentine’s Day.

What’s great is that the showings have very family friendly hours. Because there is only five, I would imagine it could be busy so you can purchase tickets online right now to make sure you don’t miss out.

The SpongeBob Movie: Sponge out of Water 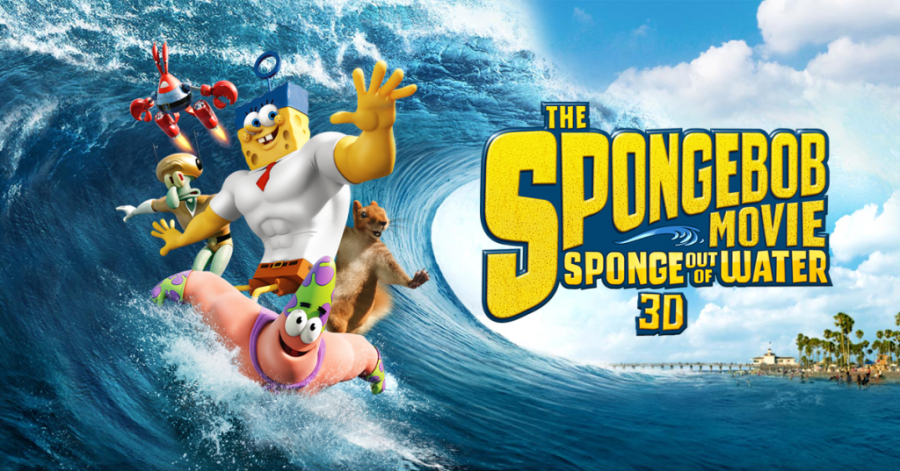 RATED G – for take your kids or they will hate you!

Another family film is opening in February that will provide you with another great option. It’s our favorite sponge who lives at the bottom of the sea. The Nickelodeon show is great because it is something you can sit down and watch with your kids and laugh just as much as they do. It’s humour for the whole family.

It’s the same cast of misfits from Bikini Bottom that get into trouble except this time they go from being in the deep sea to above ground in our world. We get Patrick, Squidwerd and Spongebob in 3D hilarity. If that doesn’t win you over there is  an evil pirate played by Antonio Banderas.

If you are a fan of the show this could be a great family movie option. Should be fun.

Release Date: February 6, 2015
Theater Near You

The Tale of the Princess Kaguya 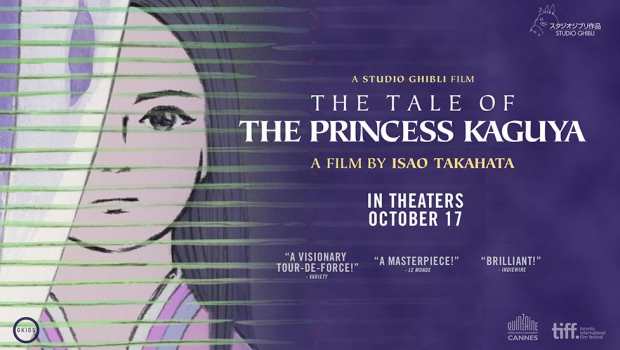 Official Synopsis: Legendary Studio Ghibli cofounder Isao Takahata (Grave of the Fireflies, Pom Poko) revisits Japan’s most famous folktale in this gorgeous, hand-drawn masterwork, decades in the making. Found inside a shining stalk of bamboo by an old bamboo cutter (James Caan) and his wife (Mary Steenburgen), a tiny girl grows rapidly into an exquisite young lady (Chloë Grace Moretz). The mysterious young princess enthralls all who encounter her – but ultimately she must confront her fate, the punishment for her crime. From the studio that brought you Spirited Away, My Neighbor Totoro, and The Wind Rises comes a powerful and sweeping epic that redefines the limits of animated storytelling and marks a triumphant highpoint within an extraordinary career in filmmaking for director Isao Takahata. (C) GKIDS

RATED PG – for order munchies and geek out.

This is for you anime freaks. This is not meant for all ages, but it is supposed to be a fantastic film by the legendary Isao Takahata. If it is truly his last film, many are calling this his crowing achievement. Some critics are saying it’s the frontrunner to win Best Animated Feature at this year’s Oscars. Now is your chance to check it out on the big screen.

This has a very limited release. It’s only showing once at the Vancity Theater on February 9, at 1:30 p.m. You can purchase tickets online. 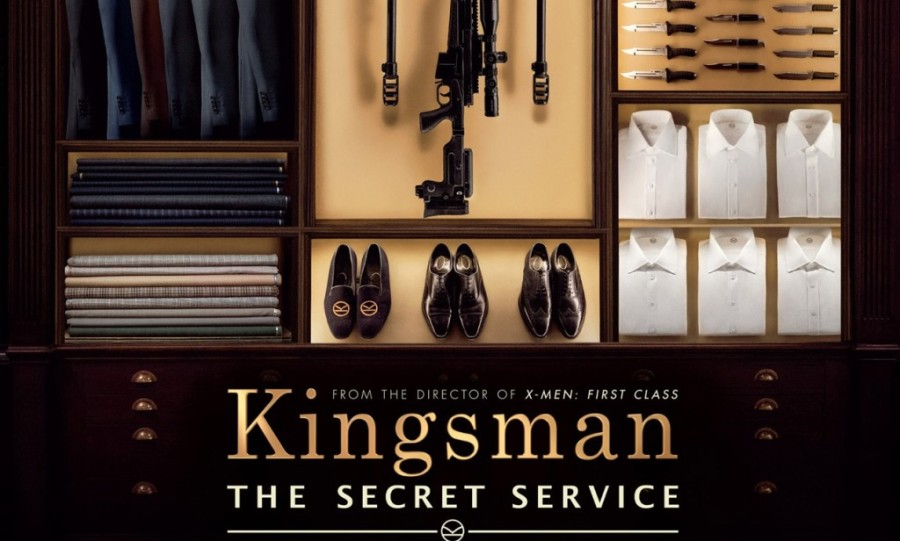 Official Synopsis: Based upon the acclaimed comic book and directed by Matthew Vaughn (Kick Ass, X-Men First Class), Kingsman: The Secret Service tells the story of a super-secret spy organization that recruits an unrefined but promising street kid into the agency’s ultra-competitive training program just as a global threat emerges from a twisted tech genius. (c) Fox

Okay now that we have put the kids to bed it’s time to get into the more adult oriented fun. Kingsman: The Secret Service looks like it could be a blast. It’s based on a popular comic book series called The Secret Service.

Just looking at the trailer above and seeing that it stars Colin Firth kicking ass is reason enough to check this out. Not to mention it also stars Samuel L. Jackson and Michael Caine which should also give you a bit of a nudge. Even Mark Hamill (Luke Skywalker) is in it and starting his much anticipated silver screen comeback. “Noooooo that’s impossible!” – Sorry I couldn’t help myself.

So far early reviews have been positive. Put this one on your list. This could turn into a popular franchise.

The Duke of Burgundy 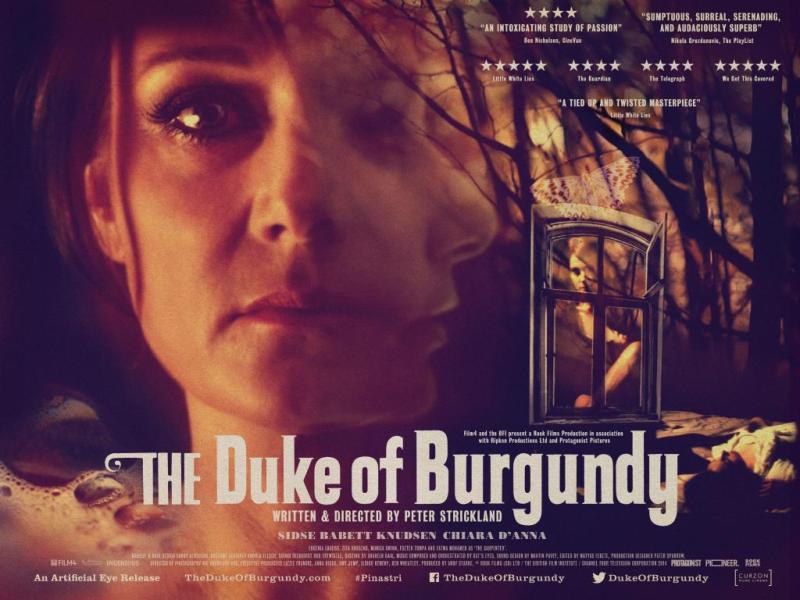 Official Synopsis: Day after day, Cynthia (Sidse Babett Knudsen) and Evelyn (Chiara D’Anna) act out a simple yet provocative ritual that ends with Evelyn’s punishment and pleasure. As Cynthia yearns for a more conventional relationship, Evelyn’s obsession with erotica quickly becomes an addiction that may push the relationship to a breaking point. (C) Sundance Selects

The film plays once a day starting on February 13 to 19. You can see the full schedule here. It has gotten excellent reviews, but please be aware this is not for everyone.

Director Peter Strickland is a very “artistic” film director and some people find his previous work to be kind of bizarre and very different. I’m fully expecting this to be an erotica trip. Put this on your list if you are looking for something different for a Valentine’s Day movie night out. 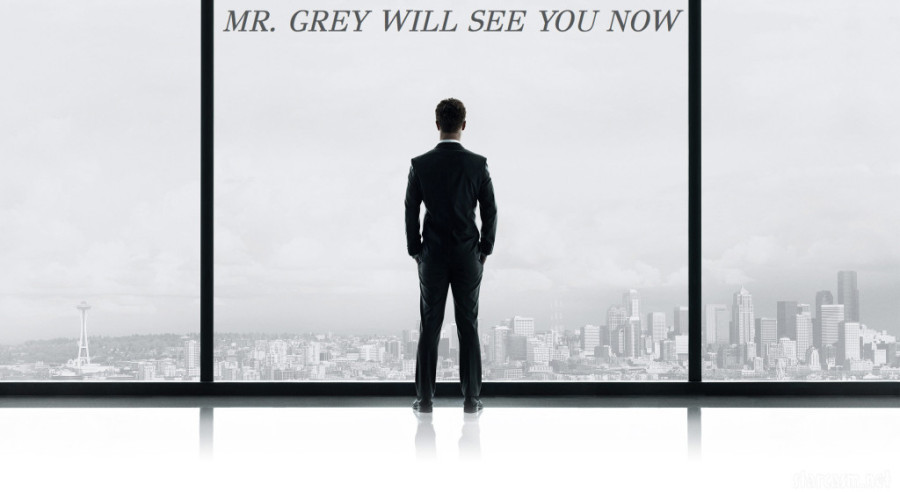 Official Synopsis: E.L. James’ kinky best-seller gets the big screen treatment with this Universal Pictures/Focus Features co-production. The steamy tale details a masochistic relationship between a college student and a businessman, whose desires for extreme intimacy pen from secrets in his past. ~ Jeremy Wheeler, Rovi

Rated R – For you’re probably getting some tonight.

This will probably be the biggest film of the month and one of the top grossing films of the year. If you are looking to get lucky on Valentines Day here’s the plan: red wine, oyster bar, Fifty Shades of Grey movie. Easy. Done. Thank me in the morning. You’re making breakfast.

While watching we can play the whisper game of how many local Vancouver sites we can find, because if you have been living under a rock it was filmed in our fair city.

Okay now I feel dirty. We went from Spongebob to whips and chains.

I could only make six picks but we do have some honorable mentions that should be on the list as well. Just click on the titles below and have a look at their trailers. The Edward Snowden documentary Citizenfour is playing in Vancouver for only one showing.

Most of the mentions may not be playing in town on their actual release dates, but keep an eye out for when they will be showing. Just pay attention to this monthly 6-Flick-Picks series and you will be informed.

There is a couple of great documentaries and a few other really good films that have already got rave reviews.

I wanted to include Jupiter Ascending in my six, but early whispers is the movie is awful. It’s included in honorable mentions because sometimes movie snobs get it wrong from time-to-time.

Enjoy the flicks. Make sure to get out and support the VIFF Vancity Theater this month, they are becoming one of the last places to see some of these limited released gems. Stay tuned for our Oscar picks as we gear up for the big award show.