We’ve had a nice run of weather here in British Columbia as it appears Mother Nature has bestowed Spring on us early. But we know how it goes, March is always wet. With that in mind, what films are worth checking out this month? Time for another edition of our monthly 6-Flick-Picks.

From robots to a glass slipper, March has something for everyone. 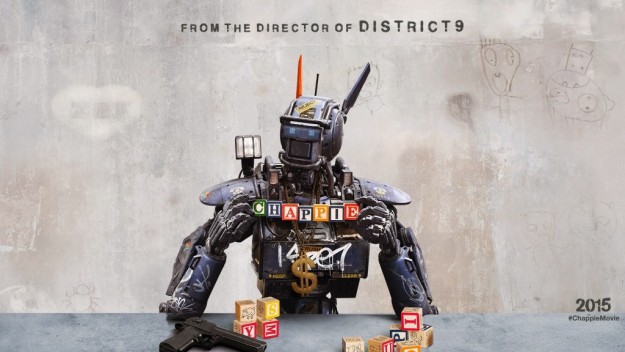 Official Synopsis:In the near future, crime is patrolled by an oppressive mechanized police force. But now, the people are fighting back. When one police droid, Chappie, is stolen and given new programming, he becomes the first robot with the ability to think and feel for himself. As powerful, destructive forces start to see Chappie as a danger to mankind and order, they will stop at nothing to maintain the status quo and ensure that Chappie is the last of his kind. (C) Sony

RATED R – for a lot of violent robot goodness

Director Neil Blomkamp has done some fantastic films in the science fiction genre from his first smash hit District 9 to the enjoyable film Elysium. Now he tells us as a story about a robot named Chappie who acts and feels on real emotions. It’s like Short Circuit on steroids. Chappie stars Sharlto Copley (voices Chappie), Hugh Jackman, Dev Patel and Sigourney Weaver.

Chappie is this year’s fist big sci-fi film and the first of many that are coming out over the next few months.

Release Date: March 6
Theatre near you 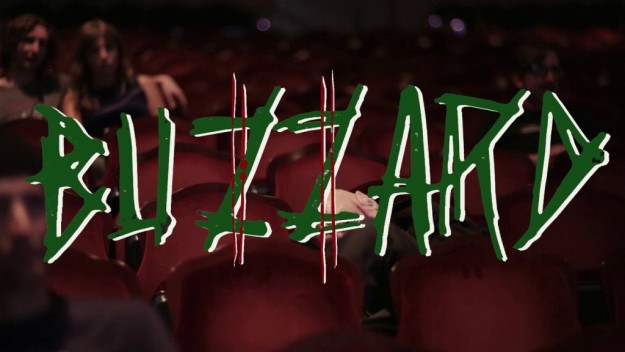 Official Synopsis: Marty is a caustic, small-time con artist drifting from one scam to the next. When his latest ruse goes awry, mounting paranoia forces him from his lousy small town temp job to the desolate streets of Detroit with nothing more than a pocket full of bogus checks, a dangerously altered Nintendo (R) Power Glove, and a bad temper. Albert Camus meets Freddy Krueger in Buzzard, a hellish and hilarious riff on the struggles of the American working class. (c) Oscilloscope

Unrated – Meaning there is no rating system for awesome. Not suitable for kids.

This has cult hit written all over it. Early reviews have been positive but unfortunately it is on limited release. Do not worry though because the VIFF Vancity Theatre will be showing this film on March 10 at 10:40pm. Or you can watch it in the comfort of your own family room via video on demand.

It’s a horror movie but with slackers. It’s one part Napoleon Dynamite and one part Freddy Krueger. It also has a message regarding American capitalism. Yet the only reason I want to see this film is because it appears that the main character uses a Nintendo Power Glove as a weapon. This could be worth a look-see. 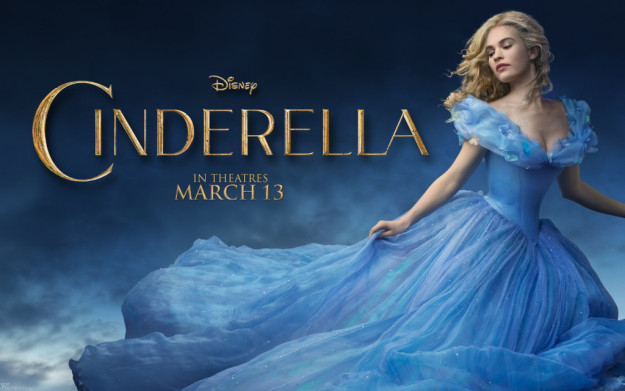 Official Synopsis: The story of Cinderella follows the fortunes of young Ella (Lily James) whose merchant father remarries following the death of her mother. Eager to support her loving father, Ella welcomes her new stepmother (Cate Blanchett) and her daughters Anastasia (Holliday Grainger) and Drisella (Sophie McShera) into the family home. But, when Ella’s father unexpectedly passes away, she finds herself at the mercy of a jealous and cruel new family. Finally relegated to nothing more than a servant girl covered in ashes, and spitefully renamed Cinderella, Ella could easily begin to lose hope. Yet, despite the cruelty inflicted upon her, Ella is determined to honor her mother’s dying words and to “have courage and be kind.” She will not give in to despair nor despise those who mistreat her. And then there is the dashing stranger she meets in the woods. Unaware that he is really a prince, not merely an apprentice at the Palace, Ella finally feels she has met a kindred soul. It appears her fortunes may be about to change when the Palace sends out an open invitation for all maidens to attend a ball, raising Ella’s hopes of once again encountering the charming Kit (Richard Madden). Alas, her stepmother forbids her to attend and callously rips apart her dress. But, as in all good fairy tales, help is at hand, and a kindly beggar woman (Helena Bonham Carter) steps forward and – armed with a pumpkin and a few mice – changes Cinderella’s life forever. Disney

Early reviews have been fantastic so that’s an added bonus when you take your little prince or princess to this film. I know my “lil reviewer” will be digging out her Cinderella dress to see this live adaptation of the 1950 Disney animated classic.

Disney is on this current kick where they are creating live adaptions of their most famous cartoons, and although Maleficent was a nice attempt, it appears they got it right with Cinderella. Stay tuned for our review on March 13th. You can expect this film to do well at the box office this month. 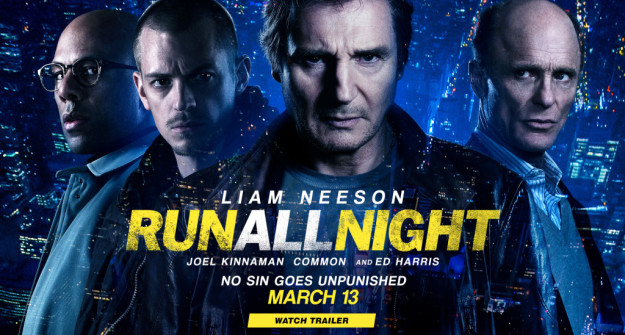 Official Synopsis: Liam Neeson reunites with director Jaume Collet-Serra for this Warner Brothers thriller following a mob hit-man and his estranged son (Joel Kinnaman) as they flee the wrath of a vengeful crime boss.

After Taken 1,2 and 3 the world needed another Liam Neeson, one man army, action flick. This time he’s defending his son from the Irish mob. To be honest, the trailer doesn’t look half bad. Sometimes we all just need an evening full of shootouts, fist fights and car explosions. There are a few ladies out there that dragged their men to Fifty Shades of Grey last month, so maybe March is payback Liam Neeson style.

Release Date: March 13
Theatre near you 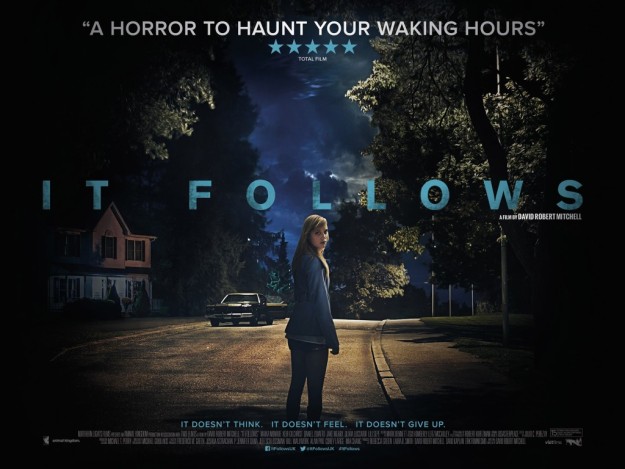 Official Synopsis: After a strange sexual encounter, a teenager finds herself haunted by nightmarish visions and the inescapable sense that something is after her. (C) Radius-TWC

This horror film has been getting a ton of great buzz. Many are calling it original and very suspenseful. It’s about time this genre got some quality film making. Over the years too many horror films have been campy and not even close to being scary. The movie is geared towards teenagers but overall this looks like a terrific  choice for a date night.

Release Date: March 13
Theatre near you 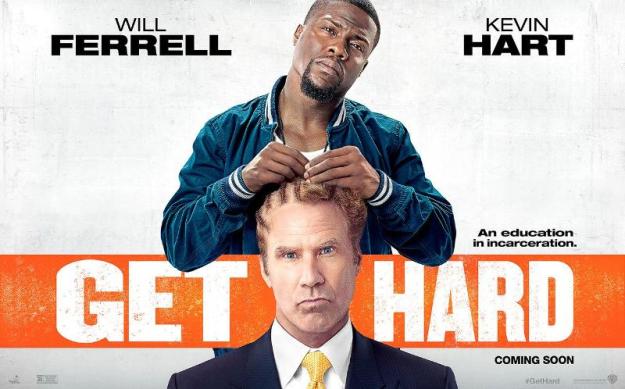 Official Synopsis: Will Ferrell and Kevin Hart headline this Warner Bros. comedy about a wrongfully convicted investment banker who prepares for prison life with the help of the man who washes his car.

Rated R – for a lot of dick jokes but who doesn’t like those?

If you are not into Cinderella or horror films, maybe a stupid comedy that is probably full of big laughs might be up your alley. Get Hard is directed by Etan Cohen who was the man behind the 2008 comedy hit Tropic Thunder.

There are two types of people, those who like Will Ferrell and those who don’t. For those who like the comedy styles of Ferrell, Get Hard looks like the film for you. Sometimes we just need to have a few crude laughs.

Release Date: March 27
Theatre near you

As always I could only pick six films that might be worthwhile viewing, but there are some definite honorable mentions.