A new poll indicates just over half of Metro Vancouver residents would vote ‘Yes’ in next year’s referendum on increasing the PST to fund transit expansion.

The online survey was conducted by Insights West, which found that 52 per cent of Lower Mainland adults will vote ‘Yes’ and 39 per cent will vote ‘No’ on increasing the PST by 0.5% to fund the Mayors’ Council $7.5-billion plan for transportation improvements.

The following plan will be implemented over a 10-year timeline:

“Do you support a one half percentage point (0.5%) increase to the Provincial Sales Tax (PST) in Metro Vancouver, dedicated to the Mayors’ Transportation and Transit Plan, with independent audits and public reporting?”

“At this early point in the campaign, there are more voters who are siding with Yes, but most of this support is unenthusiastic,” says Mario Canseco, Vice President of Public Affairs at Insights West, in a statement. “One-in-four residents, including a third of those over the age of 55 and three-in-ten BC Liberal voters, say they have decided to vote No.”

Main motivations for ‘No’ voters:

“While the Yes voters appear to be heeding the message from the recently elected and re-elected mayors on the region’s pressing transportation concerns, the No voters are directing their dismay primarily at TransLink,” Canseco adds. “Two-thirds of No voters are unwilling to provide more funds to the corporation without knowing more about their current expenditures.”

The transit referendum will likely be held in June 2015, the deadline the provincial government has provided to the region’s mayors to hold the vote. With a little more than six months before the vote, the poll found that 69 per cent of the region’s residents have heard about the referendum. About 58 per cent believe holding the referendum is a ‘good’ idea’ while 26 per cent consider it ‘bad’. 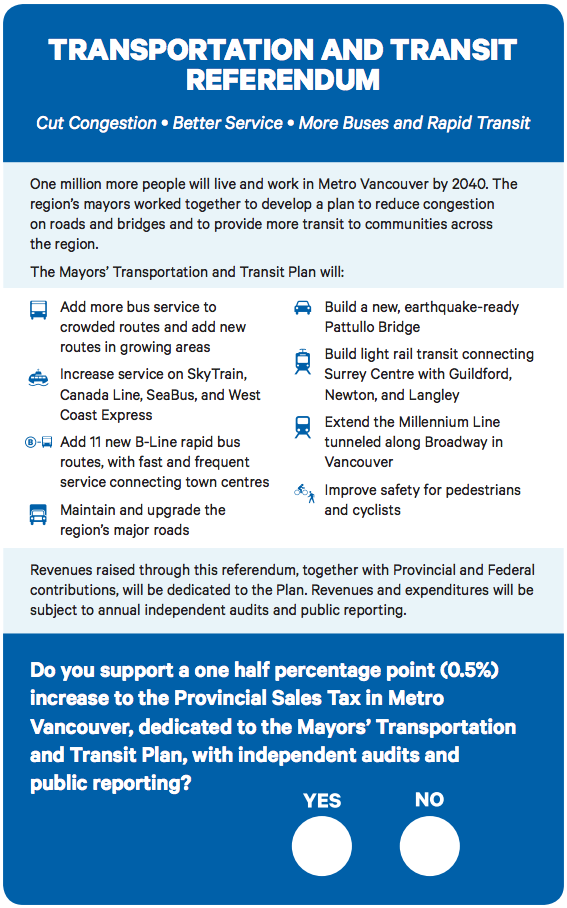