Off-Broadway cult classic Closer Than Ever comes to Vancouver in February, a brave and intimate treat for musical theatre fans. The witty, two-act musical revue takes a humorous look at “adulting.” Featuring self-contained songs about security, aging, mid-life crisis, second marriages, working couples, and unrequited love, the production is anchored by five performers at the top of their game.

Showing at the Gateway Theatre from February 4 to 20, the optimistic “bookless book musical” continues to charm audiences and makes a great shareable experience with loved ones.

Here are five reasons why Closer Than Ever will win its way into your heart this February:

Since its breakout run in New York over two decades ago, Closer Than Ever has been studied, performed and enjoyed all over North America. Created by lyricist Richard Maltby, Jr. and composer David Shire, Closer Than Ever is a personal collaboration spanning multiple drafts over many years, revised and developed with feedback from critics and audiences alike. Since then, it’s been studied in musical colleges, performed at regional theatres, and selected repeatedly for auditions – a true musical fan’s musical that has stood the test of time.

This production features both local and international stars who are, according to director Jovanni Sy, “professionals at the top of their game.” Filipino-born Ma-Anne Dionisio is perhaps best known for playing Kim in Miss Saigon across various stages around the world. However, the Canadian singer and actress also comes with a breadth of other show-stopping musical roles, including Maria in West Side Story and Éponine in Les Misérables. She’s joined by Danny Balkwill, veteran of many national singing competitions, as well as roles in Mamma Mia! and Toronto’s We Will Rock You. Last year, Balkwill is also starred in a local and well-received production of The Last Five Years. The ensemble is further enhanced by local performers Chris D. King, Kevin Aichele and two-time Jessie nominee Caitriona Murphy.

Here’s a peek at the excellent performances to come:

Juxtaposed against our screen-addled, binge-watching world, Closer Than Ever is all about connection and belonging. Modern urban life can feel alienating at times, so the musical seeks to create a richly diverse experience that looks and feels like Vancouver in 2016. Through bite-sized, well-constructed short stories, Closer Than Ever brings middle age to the forefront with gritty and all-too-real anecdotes.

4. Everything will be OK

Mid-life crisis seems to hit most of us at some point, usually once the bills and responsibilities start sinking in. Whether you’re new to adulting or taking a trip down memory lane, Closer Than Ever examines what we’ve all thought privately: “How did I get here?” Thankfully, it’s not all doom and gloom, and there’s an uplifting message of hope within the short songs. The play’s second act, focused on optimism and possibility, sees our accumulated life experiences as the beginning of something more.

Gateway’s philosophy with this production is to tell the story simply, pairing the well-constructed songs with consummate actors at the top of their game. Refreshingly without artifice, it’s a deeply personal experience that questions the world we live in, without drawing the conclusions for you. 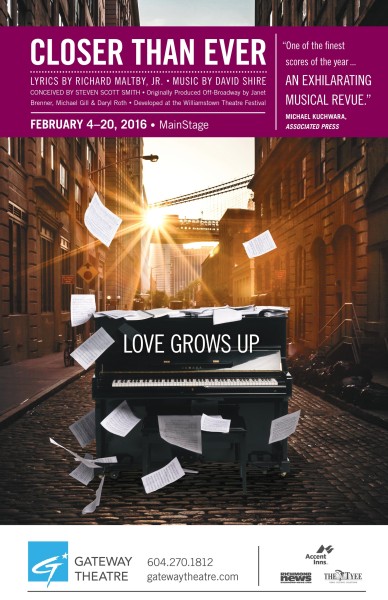 When: February 4 to February 20