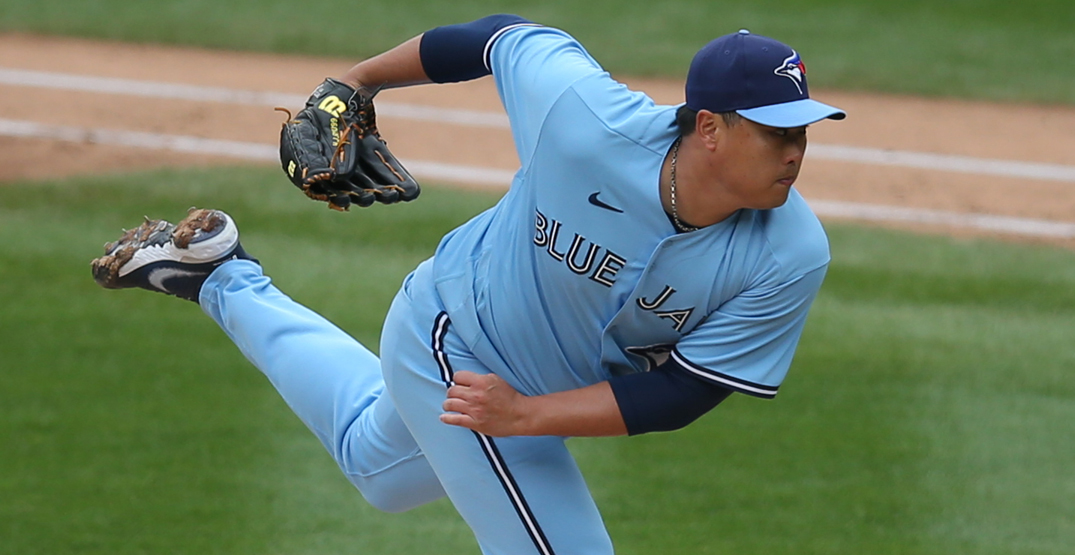 Game one into the 2021 season and the Blue Jays are undefeated and in first place. Life is good. Finally, the familiar sounds and sights of baseball are back in our lives, and not a moment too soon.

It was a bit of a nail-biter near the end, but the Blue Jays edged out an Opening Day victory against the New York Yankees 3-2. An overall solid performance for the first regular season look at Toronto’s 26-man roster.

Aside from one egregious oversight (which will be addressed below), the Blue Jays played textbook baseball to secure the victory in Yankee Stadium. They played great defence, they received great pitching from the starter and the bullpen, and the Jays got just enough offense to squeak out a win.

It’s very unlikely the Blue Jays finish the season 162-0, but here are four key takeaways from today’s game against the Yankees.

A solid start from our Ace 👏

Gerrit Cole is hands-down one of the best pitchers in the American League, but guess who’s just as good? Hyun-Jin Ryu. The Blue Jays’ lefty matched Cole pitch-for-pitch, as their stat lines looked eerily similar: both pitching 5.1 innings, surrendering two earned runs and giving up a home run a piece.

Both starters went about their stat lines in unique ways. While Cole leaned heavily on his high 90s fastball and dotting the outside part of the plate, Ryu worked his pitch mix like a magician in and out of the strike zone.

When it comes to starting pitchers, you couldn’t find two starters with different repertoires than Cole and Ryu, and yet somehow, the games they both pitched were entertaining, but for completely different reasons.

2. Vladdy’s big day at the plate and in the field

This always comes with the caveat that it’s difficult to glean too much from only 0.6% of the schedule, but Vladimir Guerrero Jr. had a great day at Yankee Stadium on both sides of the ball.

Not only did he hit a rocket of a single off Cole (ripped at 114.1 MPH), but Guerrero Jr. worked a tremendous seven-pitch at bat in the bottom of the fourth inning. He took a slider for ball four that 90% of the league would swing out of their shoe-tops for.

Besides reaching base three times against the Yankees, Vladdy looked very good playing first base, picking a couple of baseballs out of the dirt for crucial plays at first base. The kid has clearly been working at his craft this offseason, and it shows.

One interesting rule that people are still getting used to is the “runner on second base to start extra innings” rule. The Blue Jays capitalized on this right away as Jonathan Davis scored the go-ahead run, but then a very bizarre thing happened afterwards.

With Randal Grichuk in scoring position at second base, Danny Jansen used his final two strikes on a bunt attempt, and everyone in the ballpark knew it was coming. Bunting with two strikes is one of baseball’s cardinal sins, but doing it in extra innings makes it way worse.

We are currently talking about that Danny Jansen sac bunt attempt.

Charlie Montoyo has said many times that when he puts the sac bunt on, he will keep it on for the entire at-bat, giving the hitter three shots to get it down. #Bluejays https://t.co/VglYbhyFkn

According to Blue Jays manager Charlie Montoyo, when he signals for a sacrifice bunt, he wants his hitter to keep trying for the sac bunt … even with two strikes. Although the Blue Jays picked up the win, that is not the desired result in that in-game situation.

Plenty of gas out of the bullpen from Julian Merryweather – four pitches that were 98+ MPH. pic.twitter.com/MXriXFytMh

With Kirby Yates on the shelf, the Blue Jays don’t have a de facto “closer”, but Jordan Romano is as close as the team has to a typical shutdown reliever. Montoyo went to Romano in the ninth inning, so on came Julian Merryweather in extra innings.

He was thrown right into the fire, forced to protect a one-run lead in Yankee Stadium in extra innings on Opening Day. No pressure, kid. Despite the pressure cooker situation, Merryweather struck out all three batters he faced and secured the very first save of his big league career.

The 29-year-old also touched 99 MPH on the radar gun, which rivaled Gerrit Cole for some of the hardest thrown pitches of the game. Sure, it was only one game, but if that’s what the Blue Jays can expect from Merryweather, expect to see him in plenty of high leverage situations as the season progresses.