On Saturday night a crowd of fifty female Beliebers gathered outside The Sutton Place after they caught the Bieber fever that has been going around Vancouver recently. I got a tip right as the action was happening and I went to the scene to investigate.

Unexpectedly on my arrival I had trouble finding the action. As it turned out, most of the fans had to go to bed before I arrived. But nonetheless, I looked across the street and found four Justin Bieber-hunters sitting on a planter keeping an eye out for the prey. Elizabeth, Jenna, Shadei (pronounced “shawty”, awesome!) and Sara had already received a wave and a “hair-flip” from Justin’s window.

Two minutes after my arrival he came out again, I then waved, and he waved back. I don’t remember what happened for the next two minutes because I either fainted or caught a variant of the Bieber fever. But I looked up, pointed my camera at him, and he jumped back before I could snap a shot. 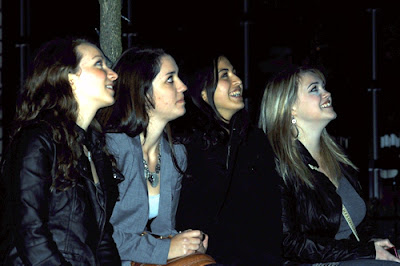 I then learned that it was Shadei’s birthday. I wanted to end the night as a success and see if we could get Bieber to come downstairs and wish her happy birthday. I took my crew of Bieber hunters inside and we approached the front desk. They directed me to a company phone.

I picked up the phone and inquired the operator for Justin Bieber. She said no guest was registered for that name. I then asked if any Disney characters or Russian presidents had recently checked in. No dice. I found the manager and he made a call. After some discussion, he looked at me with a grin and said, “Wrong hotel.” We’ll get him next time.

Special thanks to the Bieber hunters who made this a fun hunt. Are you now a Belieber?