There are good reasons why fare gates won’t be installed at SkyTrain’s Metrotown Station in time for this fall’s Compass smart card launch. First of all, there isn’t enough space inside the station to fit the many gates needed for the high passenger flow of the station. And that leads to the second point: the station is in need of a major retrofit and expansion in order to not only accommodate current demand but also rapid future ridership growth, which is why expensive fare gate installation prior to these upgrades isn’t such a great idea.

TransLink is currently in the process of planning a major $37 million upgrade for Metrotown Station and its major bus exchange. It is the second busiest SkyTrain station serving 50,000 trips per day and that doesn’t even include the additional 25,000 trips per day counted at its adjacent bus loop. On a Saturday, it’s the closest you’ll get to some of the little, local stations in Tokyo for crowded factor.

Much more ridership growth is anticipated for the station with Metropolis at Metrotown’s role as the region’s largest shopping centre and as the Metrotown area continues to densify. For instance, the Station Square redevelopment and the $1-billion Metropolis development project spearheaded by Sears Canada are among the district’s most significant additions. Unfortunately, Metrotown Station was designed and built before the opening of the major shopping centre and dense neighbourhood it now serves.

As is, virtually all passengers enter and exit Metrotown Station through the narrow east exit stairwell and escalator. The ticketing concourse for the station’s main entrance and the pedestrian overpass that links the station structure with the shopping centre are also grossly underbuilt for current demands.

Altogether, it makes for poor and congested passenger circulation within the Metrotown Station structure and makes fare gate installation prior to major retrofits completely impossible despite the misguided mainstream media and NDP outcries over this faux “oversight” last year.

Virtually all of SkyTrain Metrotown Station’s 50,000 daily passengers use this small staircase and up escalator to enter and exit the platform level. Photo credit: Matt Schroeter. 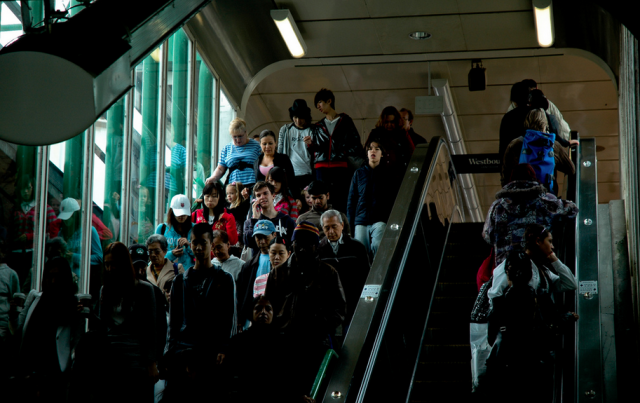 Why didn’t a upgrade happen years ago when it was already direly needed? Well, funding is always key. The project will cost $37 million, but TransLink isn’t the sole financial contributor to the project (for that matter, the transportation authority currently does not have the financial capacity to completely fund such projects).  For this renovation and expansion, the federal government is footing in about $10.5 million while the provincial government is footing a majority share with $21 million. TransLink will cover the remaining $6 million.

These upgrades consist of: 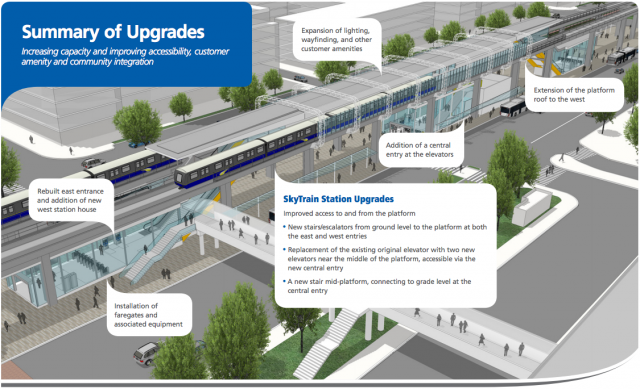 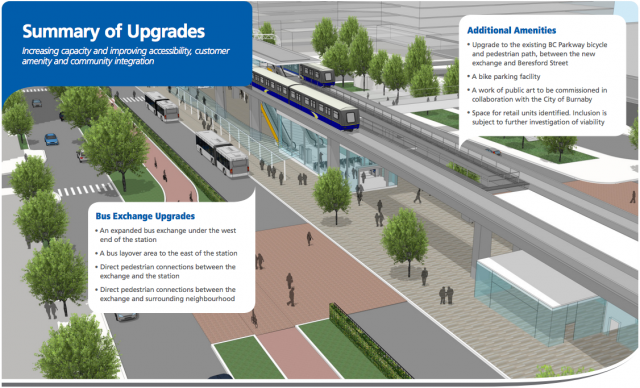 The retrofits and additions certainly address the issues of crowding and poor passenger circulation inside the station structure. Pedestrian traffic entering and exiting the station will also be more distributed (less congested and crowded) with three station entrances as supposed to the current set-up of one highly-used main entrance at the station’s east end.

However, what might be surprising is the absence of any mention of an upgraded and widened covered pedestrian overpasses to Metrotpolis at Metrotown and Station Square.

Furthermore, over the long run based on one’s observation of the renderings above, it appears the plan may be to phase-out the pedestrian overpass to Metropolis at Metrotown and force passengers to access the shopping centre, office towers, and neighbourhood via ground level pedestrian crosswalk across the street.

But is this a nightmare in the making? Consider that pedestrian traffic flow between the SkyTrain station and the mall itself via the pedestrian overpass is always a constant, steady high-traffic flow during most hours of the day. It is even busier on weekends and holidays, to the very extent that it reminds me of the high pedestrian flow of the busiest pedestrian overpasses in the highly urbanized areas of Tokyo and Central Hong Kong.

Moreover, with the relocation of the busy bus exchange to the streets that border the SkyTrain station and with passengers forced to use a street level crossing, will many passengers want to use the street crosswalk when it rains?

Will this create further street-level crossing conflicts between pedestrians and buses/vehicles? Will this affect the on-time reliability of buses? Will this cause delays and road congestion? Is this a convenient and pedestrian-friendly arrangement?

There will be a slight drop in overpass pedestrian flow as with these upgrades, transit users who are transferring no longer need to use the pedestrian overpass to get from the SkyTrain station to the bus exchange (which is currently located across the street at the mall). However, there is one more aspect to consider: the massive crowds that use the bus loop everyday will now need to cross the street in order to get to the new bus exchange.

Surely, an upgraded and widened pedestrian overpass that is fully-integrated with the station would be the best, most convenient, and safest option for pedestrians, buses, and all other vehicles in the vicinity given the very high volumes of cross-street pedestrian traffic. Pedestrian traffic will only continue to grow as Metrotown continues to expand and urbanize.

Food for thought, although forcing in the usage of street level crossings between the SkyTrain station/bus loop and Metropolis at Metrotown will likely frustrate many commuters.

An early (old) conceptual design of the Metrotown Station upgrade called for the construction of two new wide covered pedestrian overpasses to connect with Station Square and Metropolis at Metrotown. The overpasses were to be fully integrated with the station structure at the ticket concourse level. The space that the current bus loop occupies will also likely be redeveloped as part of a mall expansion (shown on the right as a red rectangular box). Rendering by TransLink. 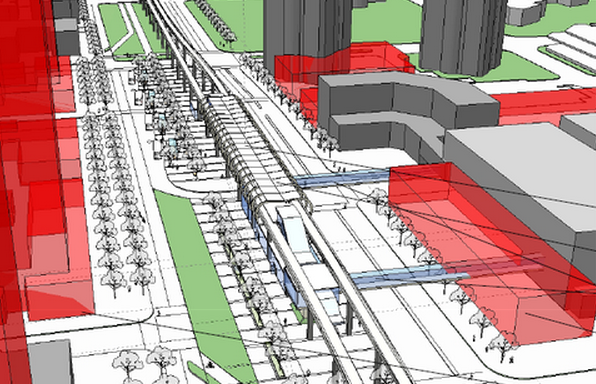 The detailed design phase of the project will be complete by the end of this year. The project is currently in its public consultation phase and is open to input. Construction could begin in spring 2014 for for a completion in summer 2016 – a total construction period of approximately two years.

What are your thoughts on the designs for the Metrotown Station and Bus Exchange upgrade? Let us know by commenting below. 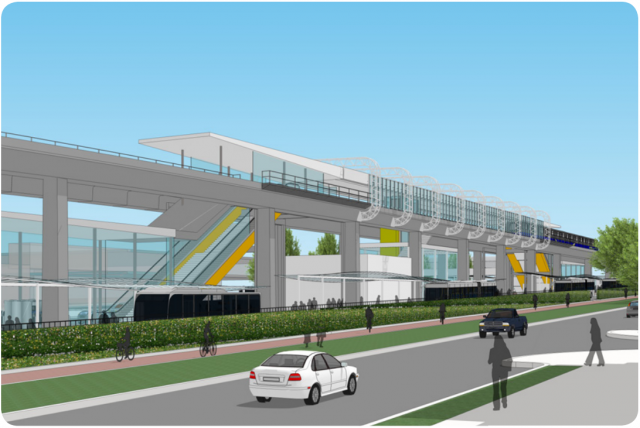