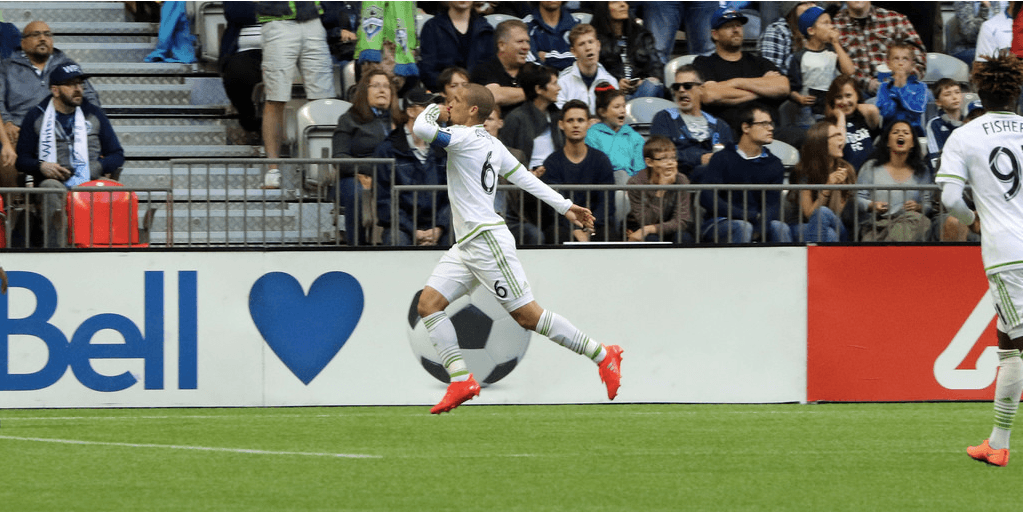 Referee Ricardo Salazar awarded an 80th minute penalty to Seattle that was converted by their captain, Brad Evans, earning them what would ultimately be the game winning goal in a 2-1 victory over the Vancouver Whitecaps on Sunday evening at BC Place officially ending any chance that the Blue and White had to quality for the 2016 MLS Cup playoffs.

In a match that was already contentious due to the deep rivalry between Sounders and Whitecaps, the last thing needed is for referring to take centre stage. Goals and red cards change games and referee Ricardo Salazar awarded two of each, effectively deciding the result of the match.

Even though each team received a red card and a penalty kick called against them, it was ultimately the Whitecaps who were more affected by the referee’s decisions. Yes, Alphonso Davis earned a penalty at the 35th minute that gave the Whitecaps the early lead.

What hustle from 15-year-old @AlphonsoDavies to draw the penalty for @WhitecapsFC 👏 https://t.co/9m8nld9qT9

But, it was a red card shown to captain Pedro Morales at the 50th minute that truly changed the script for Carl Robinson and his team. It was a weak red card after an alleged high elbow to Cristian Roldán.

After the Chilean was sent off, Seattle took control of the game in an attempt to earn full points and cement their position above the red line. Salazar put himself into the spotlight once again at the 80th minute when he awarded Seattle a late penalty kick after the ball struck Jordan Harvey’s hand as he slid down in an attempt to block a pass inside Vancouver’s box. Brad Evans stepped up and put the ball past David Ousted, sealing Seattle’s win with 10 minutes to go.

It was Evans again who received Seattle’s red card to complete the pair. After a brief scuffle with David Edgar, the freshly subbed-in Seattle captain was sent to the dressing room only 3 minutes after his goal.

Despite Salazar’s determination to decide the game, Carl Robinson still attempted to salvage the game by switching his formation to a 3-4-2 and inserting Blás Pérez and Nico Mezquida. Although they came back as the stronger team in the dying minutes, the ‘Caps attempts to level the score proved futile.

One of the most notable tactical changes that Carl Robinson deployed in his starting XI against Seattle was moving Costa Rican midfielder, Christian Bolaños to the middle of the park to play as an outright number 10. The Tico has played the majority of the 2016 campaign as a right winger in the ‘Caps preferred 4-2-3-1 formation.

The move is telling for two reasons. Firstly, at 32 years old, Bolaños may not have the kind of speed that the Welsh tactician requires on the flanks. However, there is still lots of flair, creativity, and spark left in the Costa Rican’s boots. Secondly, with Pedro Morales most likely not returning in 2017, this game may very well have served as an audition for his replacement.

Bolaños did not disappoint in the role of El Maestro. He was able to spray balls to the flanks, cut inside, and connect with Davis on several occasions to create Vancouver’s most dangerous scoring opportunities. Even though it was a losing effort, we may have gotten a glimpse of what is to come for this team in 2017.

With nothing else to play for this year except pride and the Cascadia Cup, this loss was a tough pill to swallow for Whitecaps supporters. Losing against Seattle is one of the things that Whitecaps’ supporters hate the most, however, it was perhaps the Portland Timbers fans the happiest of the bunch after Salazar blew the final whistle.

With the result, Seattle is strangely out of contention for the Cascadia Cup, and in the process, the Sounders have put a big dent into the Whitecaps’ chances of lifting the silverware on October 23rd.

On the plus side, only need to lose by fewer than 3 goals to win Cascadia Cup? #rctid

That is correct, if the Whitecaps want to hoist the Cascadia Cup they will have to beat the Portland Timbers by three goals in the last game of the season. So, there’s that.

The Blue and White will have two weeks to lick their wounds as they will return to action on October 16th as they set to battle the San Jose Earthquakes at Avaya Stadium after the international break.