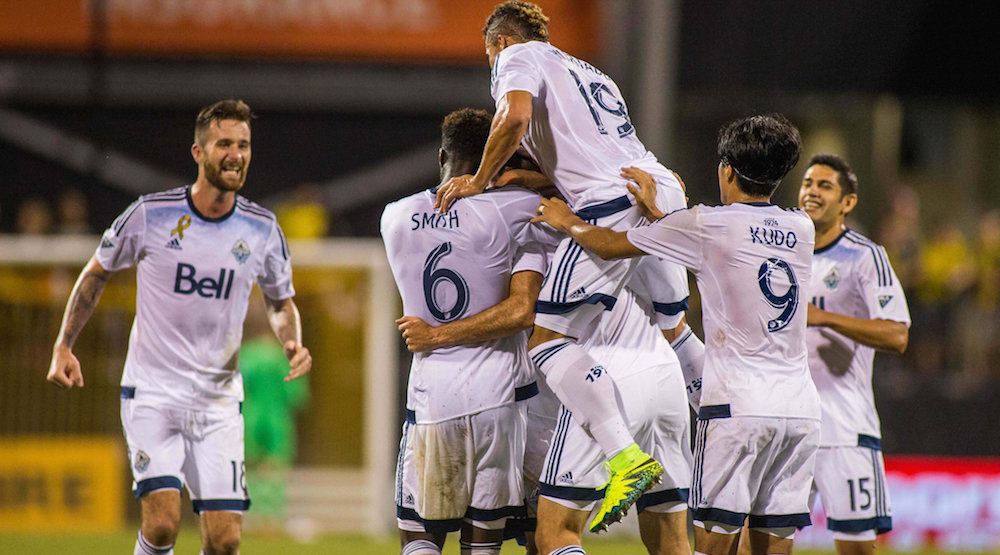 The Vancouver Whitecaps came, saw, and conquered once again in Columbus, Ohio. The Blue and White had to endure a lengthy rain delay but when it was all said and done they came out with a 3-1 win over the Crew SC.

The win means that the ‘Caps snapped their eight game winless streak. The Whitecaps have now won three of their last 16 games.

The game was delayed for over an hour due to inclement weather in the Columbus area. Even when things got started, the heavy rain was relentlessly coming down on the pitch of MAPFRE Stadium.

Despite the soggy weather, over 15,000 loyal fans remained in the stadium to witness their team be defeated for the 12th time in this season. As a result, the Crew remain at the bottom of the Eastern Conference.

A delay in the game is not only inconvenient to soccer supporters who have to endure a loss in soaking conditions. But also for soccer writers who left the game recording on their PVR only to return home and find only the first 20 minutes saved. I digress.

Like any other sport, football has a game-day routine. When a lengthy delay changes kickoff, players see their game-day routine ruined interrupted and this can potentially affect their performance. Thankfully for Whitecaps supporters, the Blue and White seem to have adjusted to the delay better than their foes.

Now with 34 points, this win temporarily places the ‘Caps in seventh spot of the Western Conference, only one point behind the sixth ranked Portland Timbers. At first glance, this win may seem to rekindle Vancouver’s playoff hopes. 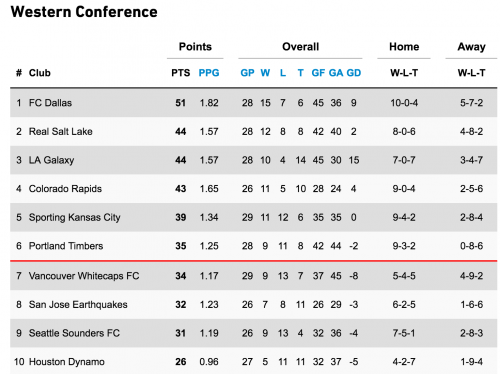 The reality, however, is that the Whitecaps chances of squeaking into the MLS postseason remain very slim. Nipping at their heels, the San Jose Earthquakes and the Seattle Sounders have three games in hand over the Whitecaps.

More importantly, the ‘Caps points per game average places them second last in the conference with only the Houston Dynamo behind them. So, while the win will certainly help them see the season out in a more dignified way, it will do little to put the Whitecaps into playoff territory.

From villain the hero

After the Whitecaps loss against the New York Red Bulls last weekend no other Vancouver player received more criticism than Erik Hurtado. The Beaverton native had a plethora of clear cut goal-scoring chances but managed to end the game with zero shots on target.

Larin with his best impression of Erik Hurtado in the last 5 minutes. Should be 3-0 for the #CanMNT

Columbus, however, seems to bring the best out of the one they called e-Money. It was MAPFRE Stadium where Hurtado scored his first MLS goal.

Today, the soccer gods smiled upon Hurtado once again as he put the game away for the Whitecaps at the 82nd minute by pouncing on a rebound from a David Edgar shot off a corner.

No jokes about e-Money’s lack of scoring this week.

The Blue and White fly now to Kansas to face Sporting Kansas City in CONCACAF Champions League action on Tuesday night. However, the Whitecaps are set to visit Century Link Field next Saturday to battle the surging Seattle Sounders in a game that will have important implications for the Cascadia Cup.

More importantly, a win in the backyard of their arch-rivals will keep the Whitecaps’ little playoff candle lit. A loss will extinguish their postseason dreams.