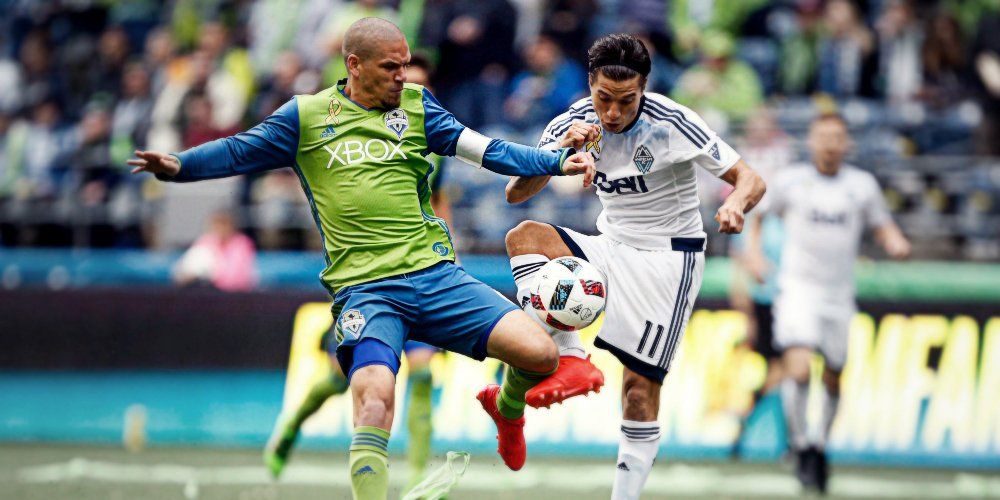 Despite showing the bend-don’t-break defensive style that allowed them to be a counter-attacking menace in years past, the Vancouver Whitecaps unfortunately did break against their Cascadian rivals, the Seattle Sounders.

Seattle’s rookie phenom Jordan Morris sent a diving header past David Ousted in the 81st minute to give the home team a 1-0 victory, keeping their playoff hopes alive while all but ending Vancouver’s hopes at the same time.

While it might be a case of “too little, too late”, it’s heartwarming to see Matías Laba get back to doing the stuff that made him such a pugnacious presence in the defensive midfield.

Classic Laba – track runner, get the ball, break up the play and don’t concede a foul.

That said, Laba wasn’t afraid to take one for the team and make the occasional tactical foul, most notably against Seattle’s mid-season super signing Nicolás Lodeiro. A push in the back here, a nip at the heels there and Lodeiro was all but banished from the centre of the pitch.

Unfortunately, that left all the other parts of the field open.

He was kinda good at fullback.

Back in April 2015, Vancouver made a cash deal with Toronto for the rights to pick up Cristian Techera on a season-long loan. Said loan included a transfer option, which the ‘Caps exercised in January.

At the time, it seemed like a no-brainer. Techera, or El Bicho – “the bug” – had been electric in his first few games, providing an attacking spark needed to jumpstart a misfiring offence. (Hey, that sounds familiar…)

While seven goals and five assists in 22 matches might be sub-par for a striker, for an attacking winger just arriving in the league, that’s a good base to build on. Expectations were thus elevated for the 2016 season.

Techera’s current haul: two goals and two assists in 27 matches, to which he added zero in an uninspiring performance against Seattle.

This was a statement game, and once again VWFC had very little to say. Unacceptable.

A match against a bitter rival with a playoff berth likely in the balance should be the time for key players, especially those making a not insignificant wage to show why they’re worth the money. Techera’s guaranteed base salary in 2016 is $345,000 according to the MLS Players Union, making him fourth-highest paid player among active Whitecaps players.

You’d think that would buy you more than a brace of goals and assists. Apparently not.