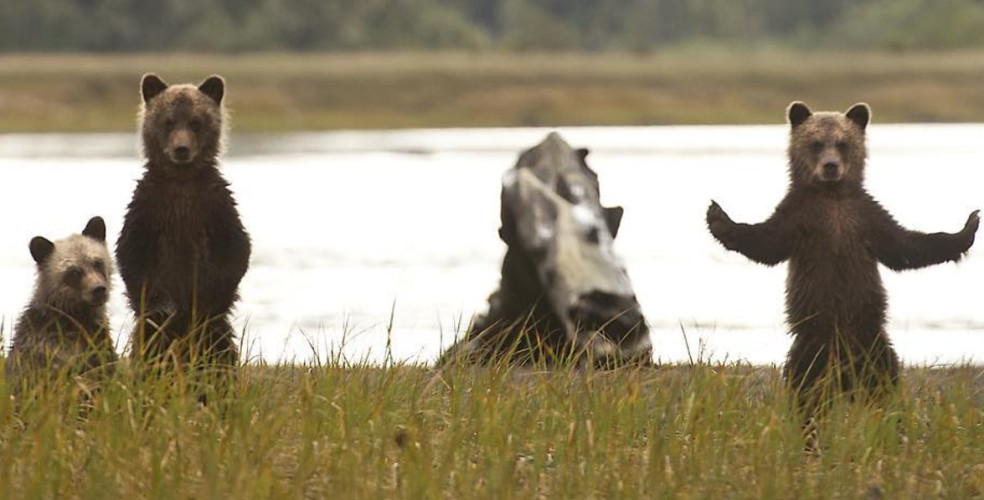 An agreement signed today in Vancouver by the provincial government and First Nations stakeholders is being called a landmark deal that will protect the Great Bear Rainforest along the Pacific coast.

This forested area along the west coast of British Columbia’s mainland, stretching from the northern tip of Vancouver Island to the Alaska pandhandle, is one of the world’s most pristine and untouched environments.

In fact, it is the only place of its kind – an intact temperate rainforest – remaining on the planet. And of course, among a great number of flourishing wildlife species, it is best known for being the home of the spirit bear, a subspecies of the black bear with white fur.

In an interview with Vancity Buzz, Pacific Wild executive director Ian McAllister says the deal is certainly a big step forward in the right direction for the Great Bear Rainforest area, although he warns that much more still needs to be done.

“It means there is more certainty in the areas that are protected, but it still leaves some areas that aren’t protected, and I think this is the balanced that have been reached in this agreement,” said McAllister. “But we don’t view it as a final conservation plan, but rather one that builds on previous agreements. And while these agreement takes significant steps in protecting the rainforest, it does not address the lack of marine use protection.”

“There is a realization that more needs to be done. For example the trophy hunt of wildlife like bears and wolves is still allowed in the Great Bear Rainforest and it’s something that we’re opposed to.”

McAllister’s non-profit organization has been working to save the rainforest for more than two decades, and part of this advocacy revolves around documenting surreal photographic evidence of the thriving ecosystem.

“From my photography, I’ve learned how much the terrestrial wildlife relies on the ocean environment and recognized that the ocean and rainforest are really inseparable when it comes to trying to define the needs of wildlife,” he said.

For example, the bears rely deeply on the intertidal areas for foraging for the salmon, and similarly wolves are often see along the waterways feeding on both salmon and herring eggs.

“I think the interaction between the ocean and rainforests really symbolizes the Great Bear Rainforest area.”

Here are 25 stunning photos taken by McAllister of the Great Bear Rainforest’s wildlife and geographic landscapes:

Rainforest wolves still have so much to teach us about this coast, about ourselves. #savebcwolves #greatbearrainforest @sea_legacy @pacificwild

The grizzly bear trophy hunt season is now open in the Great Bear Rainforest. @pacificwild will be working with our colleagues and partners such as the Coastal Guardian Watchmen program, the Coastal Bear Viewing Association, charter boat operators and others to monitor and do what it takes to keep trophy hunters out of the #greatbearrainforest #stopthetrophyhunt #bearsforever

Late September and I was fortunate to find this pack in an an estuary covered in recently spun spider webs. With the early morning mist rolling through the rainforest it couldn’t have been more beautiful. #savebcwolves @pacificwild @sea_legacy @natgeocreative #greatbearrainforest #wolvesofinstagram A photo posted by Ian McAllister (@iantmcallister) on Sep 27, 2015 at 2:46pm PDT

We often revisit places and situations where we have achieved success in the past. As full time dedicated hunters wolves understand this like no other but now that the salmon runs are over this pack is moving off into the rainforest with their growing pups to focus on new prey and new opportunities. Like clockwork they will be back on their salmon rivers next fall but between now and then another story of Sea Wolves and their intricate relationship to the ocean will unfold. @pacificwild #wolves #savebcwolves A photo posted by Ian McAllister (@iantmcallister) on Nov 6, 2015 at 4:19pm PST

A week earlier this rocky stretch of river was under three feet of rain fed water. Now it is under half half a dozen grizzly bears as they dig for delicious salmon eggs that are buried in the gravel below. #bearsforever #stopthetrophyhunt #grizzlybear #exploreBC #GreatBearRainforest @pacificwild

Very sad to hear about Doug Tompkins’ tragic accident in Chile yesterday. Over 25 years ago he came to British Columbia to lend support for the early ancient rainforest protection campaigns after he saw the devastation first-hand from his flights up along the Pacific coast. His support helped with the initial watershed assessments that inspired me to travel to the Great Bear Rainforest. He was a legend that accomplished so much for wild places. He will be missed. This image of the once endangered Nascall river is one of countless wilderness areas that are now protected in part from his efforts. A photo posted by Ian McAllister (@iantmcallister) on Dec 9, 2015 at 2:17pm PST

Spirit bear siblings in Canada’s rainforest have something to be thankful for now that Prime Minister Trudeau is moving forward on legislating an oil tanker ban in the Great Bear Rainforest. Remarkable news we should all be thankful for but it does not address the tanker transport of refined fuels or LNG that cause many of the same environmental impacts. More work to be done to address a full tanker ban through these fragile and sensitive waterways but clear progress after a decade of campaigning is near. #spiritbear #nature #enbridge #notankers #greatbearrainforest @pacificwild #gitgaat #NatureAddict #wildlife

Just learned that this split image of a rainforest wolf focused on eating herring eggs has been chosen as one of the top 20 photos of 2015 by Nat Geo. I hope this helps bring more attention to our threatened wolves here in BC. And if you are inspired to make it number one please vote on the NG site. @pacificwild #wolves #seawolves #heiltsuk #savebcwolves @natgeo @natgeocreative A photo posted by Ian McAllister (@iantmcallister) on Dec 24, 2015 at 5:36pm PST

One of my favourite grizzly bear images I took a few years ago. This mother and her two cubs would emerge from the forest at low tide to begin their daily clam dig, the clam shells were too tough for these little cubs but they certainly managed to dig up quite a few. #greatbearrainforest #grizzlybear @pacificwild

I thought these wolves that were eating herring eggs along the shoreline would scamper off into the woods once they saw me in the water but they were so curious (or perhaps they thought I was a weird looking seal and an easy dinner) they ran right over to me for a better look. Counting the days until the next great herring event and to catch up with this pack again. photo: @tavishcampbell #savebcwolves #herring #greatbearrainforest #natgeo #natgeocreative @pacificwild A photo posted by Ian McAllister (@iantmcallister) on Jan 5, 2016 at 5:06pm PST

Over the holidays the staff @pacificwild worked to assist countless people that were having difficulty navigating the BC government’s public input web site that would allow for comment on the latest plan to kill as many wolves (and three times as many grizzly bears) as possible in the Peace and other interior regions of the province. The web site, and the timing of the public input period, was clearly designed to ensure that few people would actually be able to make their voice heard. However, because of the attention that Pacific Wild and other NGO’s were able to bring to the issue the BC government has just announced an extension of the public comment period. We now have until the end of January 2016. If you have not already made your voice heard there is still time. Visit www.pacificwild.org to find the link. @pacificwild #savebcwolves #wolves #waronwolves #wildlifephotography #wildlifedefenceleague A photo posted by Ian McAllister (@iantmcallister) on Jan 9, 2016 at 8:51am PST

Grizzly bear sleeping off a long night of salmon fishing in Canada’s #greatbearrainforest. I am often asked if I have been charged or attacked by a grizzly bear and I am happy to say that so far so good. It could happen of course, bears are highly intelligent and possess unique personalities and just as with humans not always easy to predict. However, after thousands of close encounters with grizzly bears throughout Canada’s northern rainforest I have been treated either with fear, cautious acceptance or as you see here, downright indifference. Coastal bears, unlike interior bears where human/bear encounters are more frequent are fortunate to have higher reproductive success and greater food security. It’s not perfect on the coast but in the world of bears it is close. #greatbearrainforest #grizzlybear #mondaymotivation @pacificwild A photo posted by Ian McAllister (@iantmcallister) on Jan 11, 2016 at 8:56am PST

Blowing bubbles underwater is common sea lion behaviour, the key is to know when it is being used as a display of aggression or just playfulness. I have watched these underwater giants blow bubbles in the face of another, maybe as a form of distraction, and I have watched them dive deep, exhale, and then play with them all the way back to the surface. Whatever the reason, there is no terrestrial comparison when visited by dozens of these highly social and extremely large carnivores in such a fluid and intimate setting. #ilcp_photographers #sealions #oceanconservation #underwater #greatbearsea #bubbles @pacificwild @ilcp_photographers @saveourseasfoundation

Last light of day falls on a grizzly bear mom and her cubs as they search a remote estuary for the last washed out salmon carcasses of the year. #greatbearrainforest #light #britishcolumbia #spiritbear #explorebc @pacificwild #canada #wildlifephotography #nikonphotography #nikonnofilter #lovethewild A photo posted by Ian McAllister (@iantmcallister) on Jan 13, 2016 at 8:13am PST

Not sure what is going on here. Maybe the little fellow is just trying to catch his balance or more than likely he is bragging to his siblings how big his last fish was. #grizzlybear #greatbearrainforest #fishingstories

We used to describe Canada as the Brazil of the North because of the brutality of our logging practices, but today, we stand all on our own when it comes to the destruction of primeval forest. According to Forest Watch, Canada now leads the planet in the degradation of ancient forest, accounting for an incredible 21.4 per cent – or more than a fifth – of the worlds annual forest loss. For those of us that have been watching an increasing amount of ancient forest leave the Great Bear Rainforest on barges over the last few years this comes as no surprise. Just the idea of cutting ancient trees, many of them over a thousand years of age for toilet paper and other disposable products is right up there with the absurdity of the trophy hunt. #greatbearrainforest #ancientforest #temperaterainforest @globalforests @pacificwild A photo posted by Ian McAllister (@iantmcallister) on Jan 26, 2016 at 8:56am PST

Thanks for the comments and feedback from the last post. We have made some incredible changes in Canada over the last couple of months with a new Prime Minister that respects First Nations, is allowing science once again to inform political decisions, is allowing charities to do their work, has agreed to enact on oil tanker ban in the Great Bear Rainforest and other important advancements. But at the provincial level we have a BC premier that is taking us into the dark ages with her anti-environmental agenda. Until the next election we just have to keep fighting. #bcliberals #savebcwolves @pacificwild A photo posted by Ian McAllister (@iantmcallister) on Jan 28, 2016 at 5:12pm PST

Humpback whale, tail slapping in the Douglas channel. One of the great success stories of our coast in recent years has been the return of these magnificent whales to their former feeding grounds. The horrific legacy of industrial whaling left these waters silent for many years but now their symphonic, mysterious and complex calls are filling the fiords, bays and channels surrounding the Great Bear Rainforest. Describing this coast as protected when less than one percent of the marine environment is in established MPA’s or marine protected areas ignores the very foundation that provides for the coastal web of life. #marineconservation #greatbearrainforest #marineprotectedarea #humpbackwhale @pacificwild @saveourseasfoundation