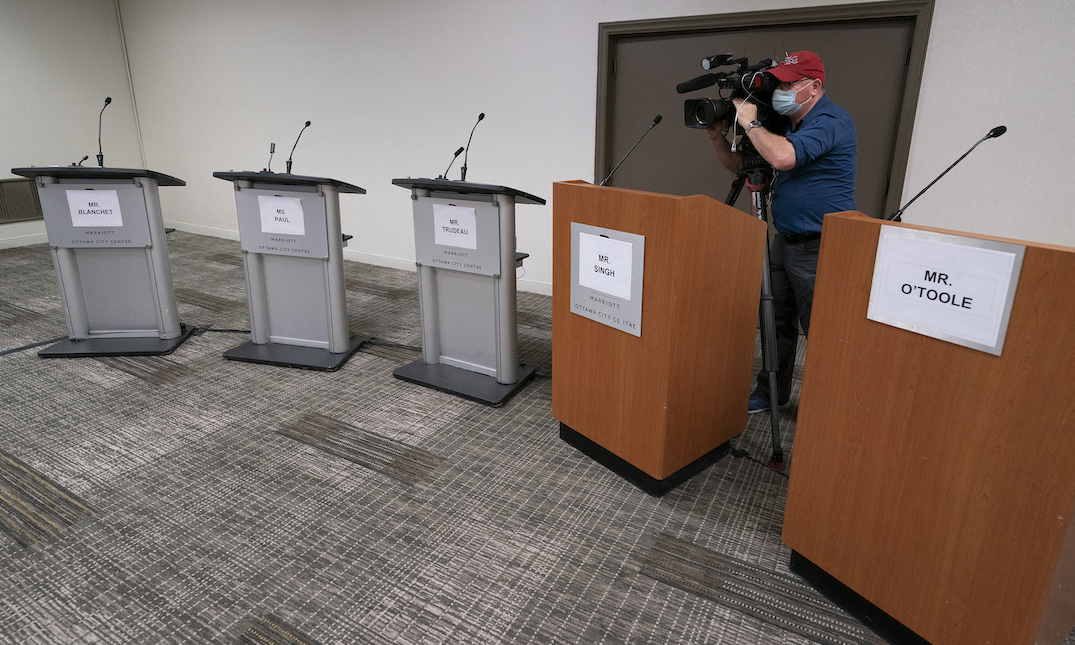 Five federal party leaders will face off in the first of two official election debates Wednesday evening in what may well be their best chance to sway voters before election day on Sept. 20.

With less than two weeks to go, millions of voters are expected to tune in for Wednesday’s two-hour French debate and Thursday’s English debate.

People’s Party of Canada Leader Maxime Bernier did not meet the criteria established by the independent leaders’ debate commission for participation.

Both debates, organized by consortiums of broadcasters, are being held at the Museum of Canadian History in Gatineau, Quebec, just across the river from Parliament Hill.

Ahead of the debate, the Conservatives will share how much their platform, which was released near the start of the election campaign, is expected to cost. The party is holding a technical briefing for the media at 4 pm eastern time on Wednesday.

Meanwhile, the Tories on Wednesday morning announced a subsidy program to help the country’s tourism and hospitality sectors emerge from the COVID-19 pandemic.

The “Dine and Discover” program would offer a 50% rebate for food and non-alcoholic drinks bought during in-person dining at restaurants between Monday and Wednesday for one month, “once it is safe to do so,” the party said in a news release. The program is expected to inject $1 billion into the two sectors, the party added.

Another program would provide a 15% tax credit for vacation expenses — up to $1,000 per person — for travel within Canada in 2022. The Tories also promised to eliminate the “Liberal escalator tax on alcohol,” which is a federal tax on alcohol products that increases annually.

“We will help Canadians deal with the rising cost of living, while supporting those who work in our hospitality sector,” O’Toole said in the release.

The debates come as opinion polls suggest the Liberals and Conservatives are stuck in a tight two-way race, with the NDP and Bloc poised to determine which of the two main parties emerges victorious.

Last week’s TVA French debate, to which neither Paul nor Bernier was invited, appears to have done little to move the needle for any party.

In 2019, some 7.5 million Canadians tuned in to the English debate across all traditional and social media platforms while some three million tuned in to the official French debate.

Surveys conducted by the debates commission afterwards suggested that “the debates were central to the electoral process,” according to a commission report on the process.

“On balance, the debates played an important role in increasing engagement with the issues, leaders, and choices before voters.”

That said, the commission reported that its surveys found no measurable difference in intended turnout or change in vote intention between Canadians who watched the debates and those who didn’t.

Topics to be discussed are climate change, the cost of living and public finances, Indigenous Peoples and cultural identity, justice and foreign policy, and health care and the COVID-19 pandemic.

The English debate on Thursday starts at 9 pm.

The topics for that debate are affordability, climate, COVID-19 recovery, leadership and accountability and reconciliation with Indigenous Peoples.