With the Canucks continuing to pile up losses, fans are looking for something to hang their hat on. Hope for the future is the best remedy to ail a fan’s heartache, and the NHL Draft is the best place to get that remedy.

It may seem pre-mature but the light at the end of the tunnel will grow brighter with each disappointing loss.

Once the season concludes, we will take a closer look at the players that may be available around the Canucks’ selection. Until then, let’s do a brief rundown on what to expect in the early parts of the 2016 NHL Entry Draft.

So with that, let’s take a look at the draft, the draft lottery, and who could be available in the top-10.

The NHL Draft Lottery will be run differently this year.

In past years, there was one draw done to determine who would have the first overall pick. It was usually the Edmonton Oilers who won, but it was still a weighted draw that gave teams who finished lower in the standings a better chance at first overall.

This year, there are some slight changes, as now the top-3 picks are lottery based.

Here’s the explanation from NHL.com: 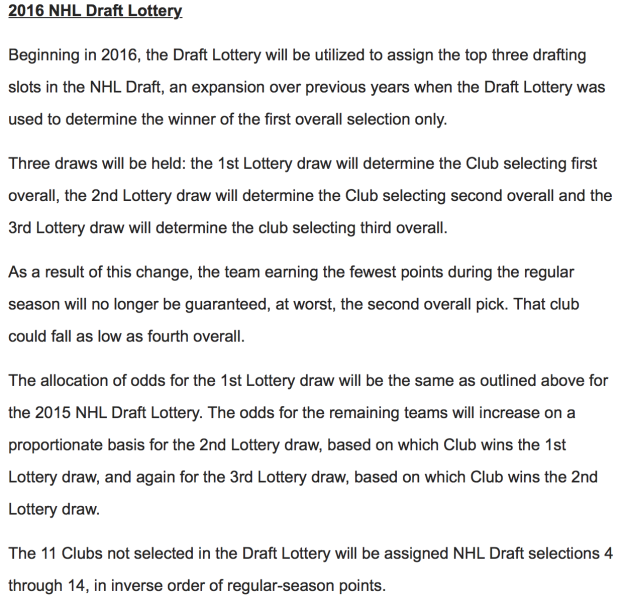 The lottery only relates to the first round, as all other rounds are based on reverse order of the regular season.

So now that the fancy speak is over, how does that relate to the Canucks?

If the season ended today, the Canucks would have the 8th overall pick in June barring a lottery win for one of the top-3 picks. Based on odds, they would be unlikely to move up.

The chances of obtaining the 1st overall pick from the Canucks’ current position is 6%. Their odds could increase up to 7.5% and 9.02% for the 2nd and 3rd picks, respectively (thanks to Jeremy Davis at Canucks Army for running the numbers).

Bob McKenzie from TSN did his mid-season draft ranking last week, ranking the top-60 players, so that will be the basis for our top 10 players here. I may personally feel some players should be ranked higher – but you don’t argue with Bob Mckenzie, he knows his stuff.

The consensus number one pick is the apple of everyone’s eye this draft. He is a complete player with good skating, great shot, and excellent hockey IQ. Whoever is lucky enough to get Matthews will be able to build around him for the next decade.

With that being said, he isn’t Connor-McDavid-good, he more closely relates to recent Buffalo Sabres second overall pick Jack Eichel.

Likely the first of the two Finns to be selected is really the only player who could conceivably give Matthews a run as the first pick (although I don’t think it will happen).

Patrik Laine is a player that will always have you thinking he has more to give, but what he gives is already fantastic. If he can be consistent every game, it won’t be a crazy to think he could be the best player in this draft.

While Laine is the flashier player, Jesse Puljujarvi is the more complete player who plays like a tank. He uses his great skating and size to dictate the play, while using his very good shot to bury his chances. Puljujarvi may go second, just because a team will know better what they are getting with him, and that will be a very good player.

Son of former NHL’er Keith Tkachuk and the highest ranked North American player (Auston Matthews is listed as an international player because he is playing Switzerland), Matthew Tkachuk plays a lot like his father.

A power forward who isn’t the biggest player, but plays with tons of heart and competitiveness. He has tons of puck skills and a good shot. Depending on how he does in the OHL playoffs this season, although a long-shot, he could convince a team to pass on one of the Finns and take the American winger. 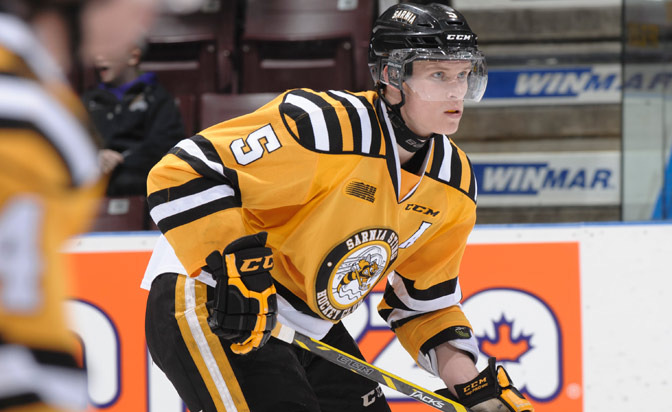 Jakob Chychrun, a Florida-born defenceman who plays for Canada due to duel citizenship, is the highest ranked defenceman. He doesn’t play a flashy game, but through his elite skating and excellent puck-moving ability, he has the look of a defenceman who could develop into a minute-eating all situations player.

If a team like Vancouver, who is in need of a blue-chip defenceman, is selecting 4th overall, they may take Chychrun over the aforementioned Tkachuk.

Younger brother of Maple Leafs prospect William Nylander, and son of former NHL’er Michael Nylander, Alexander Nylander comes in at 6th overall. By far the best forward available after Matthews, the Finns, and Tkachuk. He plays a ‘softer’ skilled game, but that doesn’t mean he isn’t willing to battle.

He was extremely prominent at the World Juniors this past January and looks to be a sure bet for the top-6. 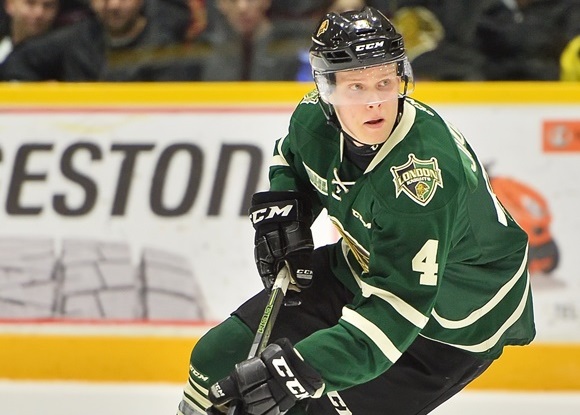 Rising from 13th in Bob McKenzie’s pre-season ranking to 7th in his mid-season ranking, Olli Juolevi will look to continue his rise and push Chychrun as the first defenceman to be selected.

Juolevi has the same points per game as Chychrun (0.72 PPG) and had a fantastic World Juniors for gold medal winning Finland, while Chychrun wasn’t selected for Canada. Juolevi is slightly taller and weighs the same as Chychrun, so he looks more slight. But if the Finnish defenceman fills out and continues to round out his game, teams may think he is a better bet than the higher ranked Chychrun.

The highest ranked Canadian, Pierre-Luc Dubois had a fantastic game at the BMO CHL/NHL top prospects game with a goal and two assists. The centre/winger who plays for the Cape Breton Screaming Eagles plays an all-around game, doing everything he can to help his team win.

He won’t be a bad choice in the later half of the top-10.

A similar player to Dubois, Michael McLeod is currently Nylander’s centre for the Mississauga Steelheads. He will likely develop into a very good two-way centre who can play in all situations. He has the size and speed to translate to the NHL very well.

The winger from the Val D’or Foreurs loves to score goals, which is reinforced by stat-line: 36 goals and only 10 assists. He represented Canada at the World Juniors and didn’t look out of place. If a team is looking for a pure goal scorer at 10th overall, they would be smart to take Gauthier and run.

This year’s top-10 has a lot of fluidity and questions to it, but if the Canucks are able to get anyone of the players above, it will be all worth it. The earlier in the round that the Canucks select, the bigger the ‘game breaker’ they will get, so maybe losing these games aren’t a bad thing.

If the Canucks can walk away with a stud, suddenly their core with Bo Horvat, Brock Boeser, Thatcher Demko, and Jake Virtanen looks that much better.

Another key is that if the Canucks finish the season with the 8th worst record, not only would they have an early 1st round pick but would also select early in every other round. Suddenly the Canucks could have a 8th overall and 38th overall pick, adding to their rapidly improving prospect pool.

Time will tell what will happen with the Canucks, but imagining some of the aforementioned players in the Canucks blue and green is a fun thing to do after each passing loss.