Yes, that’s right, in a season where not much went right, there is still reason to celebrate the 2015-16 season. Sure, some of these awards aren’t exactly desirable, some of them might make us a bit depressed, but damn it, these players are getting awards whether they like it or not.

So sit back, strap in, and let’s find out who won some Stanchies!

This award goes to the player that caused the most amounts of texts and tweets to be sent to friends that asked the simple question “WTF” after a hockey incident occurred.

Sbisa, once thought to be the clear front runner for this award, saw his lead vanish when Bartkowski kept playing more games, kept getting more ice time, and kept doing more and more confusing things in the defensive zone.

OK, look, we’re not quite sure what the award is for. Is it for fighting? I don’t know. Is it for taking penalties? Possibly. Is it for creating decent forechecking pressure? I think so?

Not since Mason Raymond have we seen a player with such high speed try to create so much on the perimeter of the ice.

There’s more strength to Etem’s game (Raymond was lucky to weigh 180 after a night at the buffet), but he still exhibits the same passion and love for skating along the boards into unwinnable situations just like Raymond used to.

Once thought to be a pushover, Daniel Sedin has shown a new side of himself this season. A darker side.

He showed glimpses of it last year, but he truly came into his own this year, getting into more scrums, verbally assaulting fellow players, and taunting another team’s bench after a game winning goal. 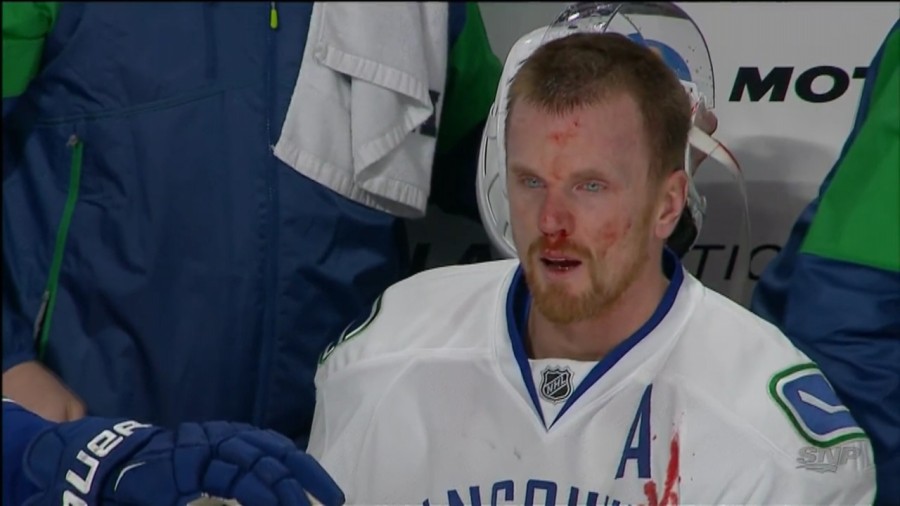 Fun Fact: Henrik Sedin is thinking about peanut butter AT THIS VERY SECOND.

Awarded to any former Medicine Hat Tiger that survives a period of uncertainty, only to rise from the ashes and persevere.

Things looked grim for Linden Vey when he was stuck in the AHL this season, but through good old fashioned Tiger grit (and injuries to other players, and the undying love of a coach), he managed to claw his way back to the NHL, and put up 15 points in 41 games, as well as briefly joining the Penguins to help them secure a win over the Canucks.

Never have we seen so many failed dangles and power moves since a young Ryan Kesler waltzed into town, several years ago.

When Bo pulls off a sweet sweet dangle, it’s an instant YouTube classic. When he couples that with his ability to power to the net, it can be overwhelming.

When it doesn’t work, it sort of looks like he’s playing NHL 16 and just mashing the deke button against a Superstar opponent.

Still, credit has to be given out for his dedication to his craft of attempting to be a one man army that can destroy and conquer all that is before him. 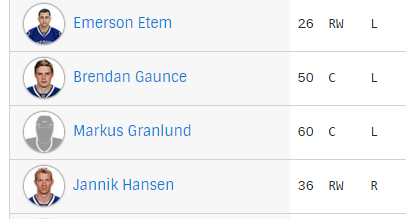 When the NHL roster page doesn’t have time for your picture, you get a hug.

Look, we all know this year’s winner is simply a paper champion until Thatcher Demko, aka Footloose, arrives. No one is beating Demko in a dance off. No one.

But if there has to be a placeholder, Hutton is a solid choice. He is the anti-Hamhuis, immune to frowns, and always smiling.

And apparently when you smile, you learn moves like this:

Given to the player who is most likely to be a robot, Chris Tanev ran away with this one. Sure, Hamhuis might frown a lot, but there have at least been a few rare smiles from him.

Tanev? The only time he smiles is when his software gets upgraded and he wants to try and fit in with his human teammates to try and learn more about them.

Look at the facts: Blocks shots like they’re nothing, almost impossible to hurt him, unable to express common human emotions, and plugs himself into the wall at night to re-charge.

Like a relationship he wanted nothing to do with anymore, Vrbata ghosted the Canucks this year hard.

Remember 2015? He was voted Team MVP. He was a dangling machine. He put pucks in nets inside of nets. He was a magician.

Then the playoffs rolled around we first saw signs of the ghosting. Then the 2016 season started and he wasn’t with the Twins any longer, and the ghosting began in earnest.

By the end of the season, we actually don’t know if he’s playing games any longer, or actually injured, sitting out games like the Canucks say he is. It’s just too hard to tell.

In a season devoid of offensive highlights, Sven Baertschi has provided some of the most watchable moments of the season. Whether it’s having chemistry with seemingly every forward on the team (except Dorsett, nobody has chemistry with Dorsett), Baertschi has not only upped his scoring game, but he has embraced the Willie D way of life of grinding it out in the tough areas of the ice.

All of this, and he’s not even a Medicine Hat Tiger alumni.

On top of that, he delivered the coolest moment off the ice as well: 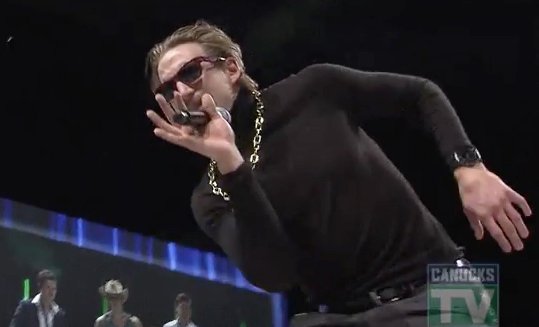 How could we not name an award after Canucks legend Mats Sundin?

Will he or won’t he? That was a common question asked when everyone waited to see if Mats Sundin would accept Vancouver’s 347 billion dollar offer to play some hockey for a couple of months.

This years winner, Dan Hamhuis, had himself quite a few “Will he or won’t he??” moments leading up to the trade deadline. With an expiring contract, and a soul burdened by sadness with his fellow man, Hamhuis seemed like the best option for the Canucks to walk away with some assets this past March.

Will they trade him? Will Hamhuis agree to go even if they get a trade? Is Fin the mascot we need or the one we deserve?? So many questions.

When the dust settled, Hamhuis of course remained a Canuck. Rumors swirled everywhere about the failures of the deadline and blame was laid at many feet.

At the end of the day, however, it’s important to not lose sight of the fact that Fin is probably the reason for all of the teams struggles. Look for my next article “Fin: The whale in the room nobody is talking about.” next week on Vancity Buzz.

It doesn’t matter whose fault it was, Ryan Miller has a 50% chance to shrug his shoulders and zero in on somebody to stare at them accusingly.

Don’t get me wrong, this is something I do every single time I’m scored on in beer league. I can promise you every goal ever scored against me is because my team did something stupid or the ref missed blatant interference.

But even I can only dream having of the artistry Ryan Miller puts into his post goal shrugging. Sometimes he stares a player down as if they insulted his family, his gaze locked in like a laser guided turret. Sometimes he gestures wildly with his arms, playing a one man game of charades. Sometimes its an almost imperceptible shrug of his shoulders at the camera, letting you know “ok, they scored, but come on, what was Bartkowski doing there.”

His arsenal of shrugs is, quite simply, elite.

This award goes to a giant player who you actually fear might put somebody in a coma with their brute strength.

We just have to accept the fact that at one point next season, Tryamkin is going to sneeze and it’s going to put five players on the injured reserve list.

At one point Tryamkin is going to get mad during a practice and the team will get a player to light a flare and skate with it to distract Tryamkin (whose vision is based on movement) while his teammates get away.

At one point a small man with a magic bean based plan will break into Tryamkin’s house and it will be made into a story told to frighten children.

Nobody brought the combination of truth and goals that Jannik Hansen did this year.

While the Sedins did their best to be the leaders who pretend everything is fine while the building around you is on fire, Hansen was having none of that. He was quick to point out that the building was indeed on fire and in fact you’re all probably going to die.

There were plenty of games where the Canucks looked awful and Hansen was always willing to point out the obvious during interviews: They weren’t playing good enough.

Gloomy? Sure. Refreshing? You bet.

He does not require sleep. Especially after Bieber concerts.

Kiss of the Year Award – Jared McCann and Ryan Miller

This is not a one time deal by the way.

Almost locked it in. Almost.

Named after the originator himself, Tom Sestito, Ben Hutton did his best to step up to the plate and continue the proud winking tradition in Vancouver:

Alex is smart enough to wait for others to do the most damage until he sneaks in at the last second for the decisive killing blow. Mere seconds later Stoll exploded into a cornucopia of candy and confetti.

BY GAWD THAT MAN HAS A FAMILY!

Best Save of the Year – Alex Biega

Back up goalie controversy between Biega and Edler next year.

Goal of the Year – Jared McCann

Nobody said it had to be a goal during a game. 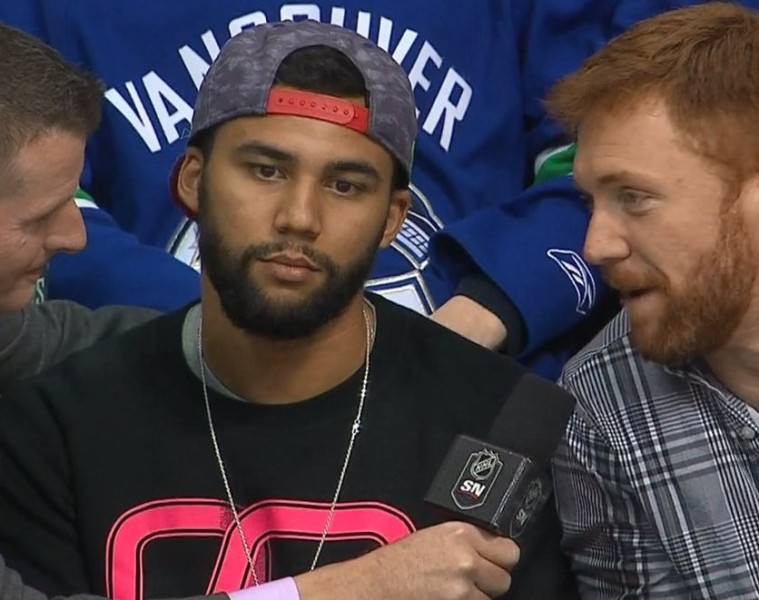 Leaning over somebody to interview the guy beside them?

Poor Jon Jennings doesn’t even know what hit him.