The Young Stars tournament has come to a close for 2015 with the Canucks prospects finishing with a 2-1 record.Even though these games mean nothing, it was great entertainment with the Western Canadian teams’ prospects providing some quality September hockey. With training camps opening later this week, the Canucks prospects hope they made enough of an impression to earn an invite to main camp and some pre-season action. 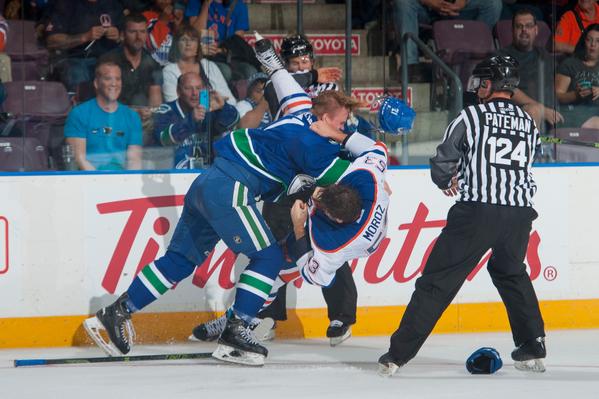 Although the score wasn’t really an indicator of the game overall, any time you give up 8 goals ‘yikes’ is an appropriate way to describe it.

With that being said, many of the Canucks Young Stars played well, but bad goaltending from Clay Witt made the score lopsided. Signed to an AHL contract, Witt looked over-matched and unable to adjust to the Oilers offence.

But at the end of the day, it wasn’t the score that Canucks fans were talking about, it was Jake Virtanen welcoming Connor McDavid to professional hockey with this thunderous hit:

That hard and clean hit from Virtanen drew the ire of the Oilers for the rest of the game.

Nurse vs Virtanen. Might be a theme for the next 8-10 years. pic.twitter.com/5gut5W8hO5

Ben Hutton and Brendan Gaunce were the goal scorers for the Canucks.

If this is an indicator of what Canucks-Oilers games will be in the future then we should all be excited. Hopefully whoever the Canucks’ goaltender is at the time will be able to stop a puck or two. 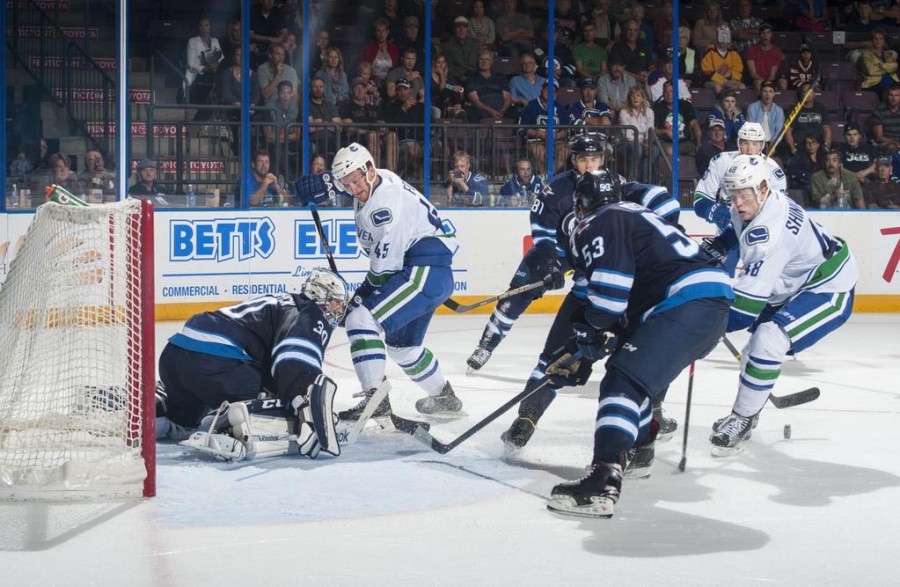 As mentioned, although the Canucks didn’t play poorly in Game 1, they were embarrassed on the scoreboard. That embarrassment seemed to motivate them in Game 2 on Sunday as they dominated the Jets.

The Canucks outshot Winnipeg 41-18 and controlled the play for the majority of the game. Free agent invitee goaltender Jackson Whistle was good when he had to be and the Canucks defence transitioned the puck well. The highlight of game 2 was Canucks prospect Jared McCann showing the referee some love after opening the scoring:

McCann so happy he scored, he hugs the ref #canucks pic.twitter.com/jQ4Aac2Qzt

The physical tone of Game 1 carried over to the game versus the Jets. However this time, former 6th overall pick, Jake Virtanen was on the receiving end.

Virtanen gets sat down at the blueline #canucks pic.twitter.com/bOe9c1vMlG

Jared McCann, Mike Zalewski, Reid Gardiner and Hunter Shinkaruk scored the goals for Vancouver. Josh Morrissey had the lone goal for the Jets. 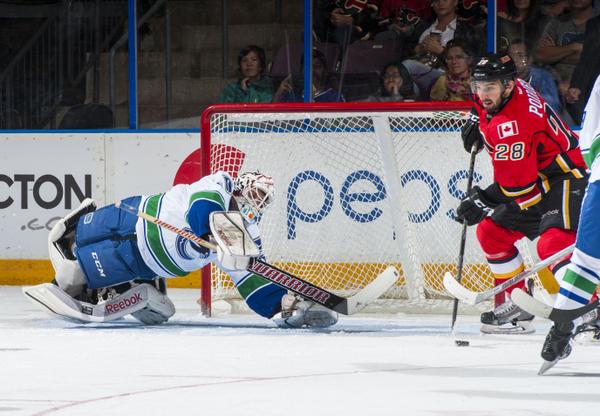 The finale of the Young Stars Classic got off to a very slow start, with the first half of the game leaving much to be desired.

Things started to pick up as the game went on and both teams started trading chances. Luckily, the game went to overtime and we were able to get our first look at 3-on-3 overtime.

If this game was a preview of what’s to come, this new overtime format is going to be fun. Imagine the Sedins out there with that much room.

Dane Fox, Rodrigo Abols and Jake Virtanen scored for the Canucks, while Morgan Klimchuck and Julien Proulx had the goals for the Flames.

Earlier this month in our prospect rankings, I suggested that Brendan Gaunce may be known as the forgotten first round pick. Well, he’s put himself back on the map after his performance in Penticton.

Gaunce used his size to create space, and as witnessed above, he has an NHL release. But the most noticeable improvement for Gaunce is in his skating.

Although still not the greatest skater, the progress he has shown over the course of one year is impressive. If the Markham native can continue to play in the preseason like he did in Penticton, then Gaunce may see a few NHL games sooner rather then later. He was given the Monday game off as a ‘reward’, so it will be interesting to see how he does at main camp. 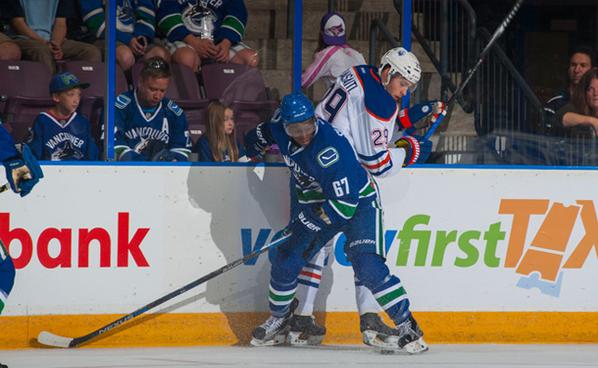 I’ve been on the Jordan Subban bandwagon for quite some time, and his play in Penticton  just re-affirms it.

Yes, Jordan Subban is small and may have trouble in the pro ranks due to that. But his performance this past weekend should get Canucks fans excited.

He skated well and was aggressive with the puck. The Canucks’ second goal on Sunday versus the Jets was all Subban. He called for the puck at the blue line, attacked the net, and made sure to get his shot through. This caused a scramble, which lead to Mike Zalewski pouncing on a loose puck.

The former 4th round pick does have flaws in his game, but I would suspect that he makes it one day.

Last week, in my preview of the Young Stars tournament, I said to expect Jake Virtanen to make an impact physically early. He did that with that hit on Connor McDavid and continued to be physical throughout the entire tournament.

Although Virtanen didn’t get his first point until the final play in the final game, his play has to be viewed positively. While consistency was an issue for him, he was certainly noticeable in every game and wasn’t afraid to be physical.

If Virtanen can continue to use his speed and deliver big bodychecks, while being responsible defensively, he should have a spot in the Canucks’ opening lineup.

This year’s Young Stars tournament didn’t disappoint. If you are able to, I highly recommend making the trip to Penticton for next years’ tournament. Nothing beats six games in four days while being able to hit the beach between. For the Canucks prospects, it is a great opportunity to impress and get ready for training camp.

The Vancouver Canucks training begins this Thursday at Rogers Arena, before moving to Prince George on Friday.