Last night was the ever anticipated Academy Awards, which is also one of the biggest events in fashion. The stars show off their latest, most glamorous gowns and tuxedoes as the world watches to see who will take home the coveted golden statue. However, before anyone can see who will win the golden man, the world looks on to see who has the best designer gown on and who missed the mark.

This year, like others, had so many hits with the gowns that it almost took away from the misses! But alas, the misses could not get past the spotlight. Now, everyone always has their own opinion about which gowns were the best and which ones should have been left in the stores. Not everyone will agree with some judgements on the attire of the stars, but again, it is all opinion based.

Here are some of the gowns that have made many lists for best and worst dressed. 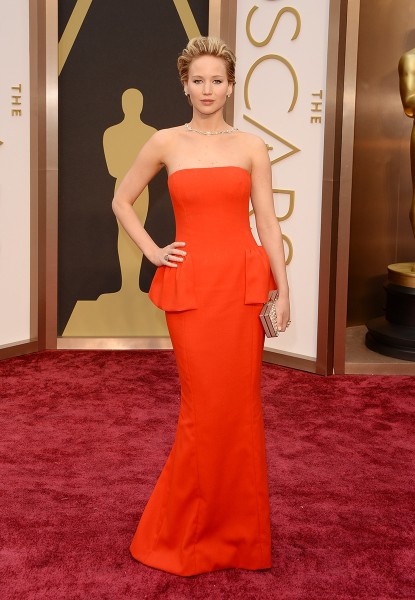 Once again Jennifer chose to wear a Dior gown, and for good reason. She looks amazing in the designer’s gowns and the fiery red shade suited her complexion perfectly. In the past we have seen Jennifer wearing gowns that were not only stunning, but very ball gown-like. This time she opted for a more fitted dress and it worked wonders for her. She may not have won Best Supporting Actress, but she can definitely take home an award for best dressed. 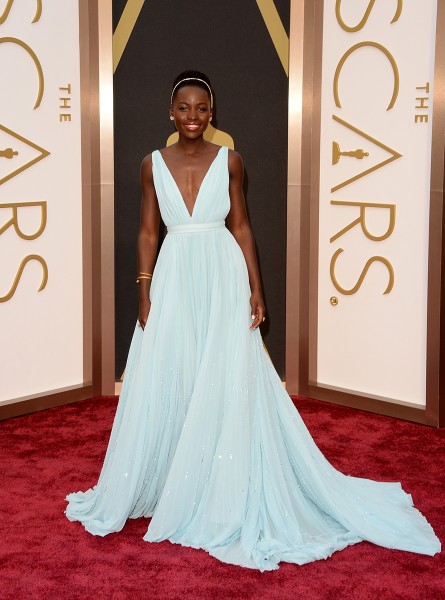 The Oscar winner for Best Actress won an award for best dressed as well! The pale blue gown looked stunning on her and suited her perfectly. The plunging v-neck showed a bit of a daring side while the flow of the gown kept it soft and feminine. Lupita wowed everyone with her Oscar winning performance and her show stopping gown. 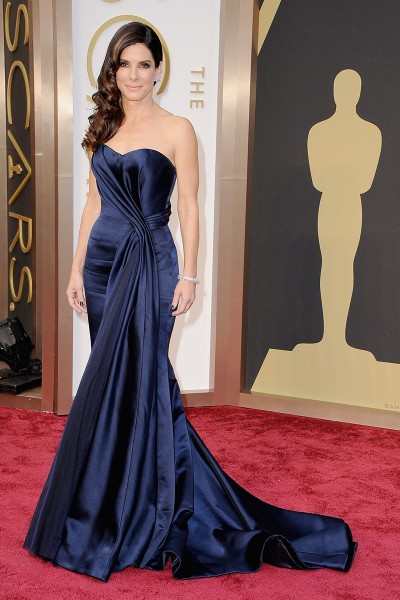 Navy appears to be Sandra Bullock’s colour and she looks out of this world in the Alexander McQueen gown. The sweetheart neckline gown fits her perfectly and the balance of fitted and flow was very flattering. She definitely deserved a spot on the best dressed list. 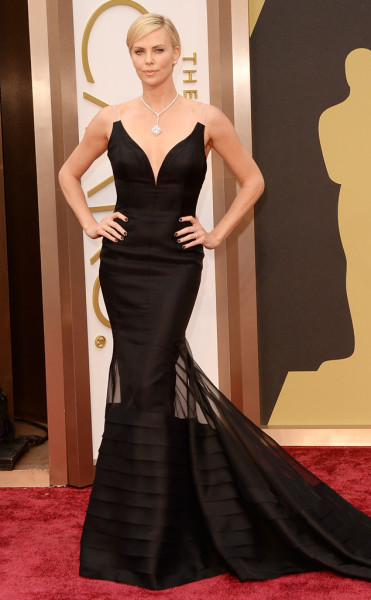 One woman who always turns heads in the best way on the red carpet is Charlize, and this Oscars event was nothing out of the ordinary for her. The gown was incredibly flattering and showed off her toned body in a very classy way. Charlize loves the neutral colours and choosing black was a great choice for this style of gown. 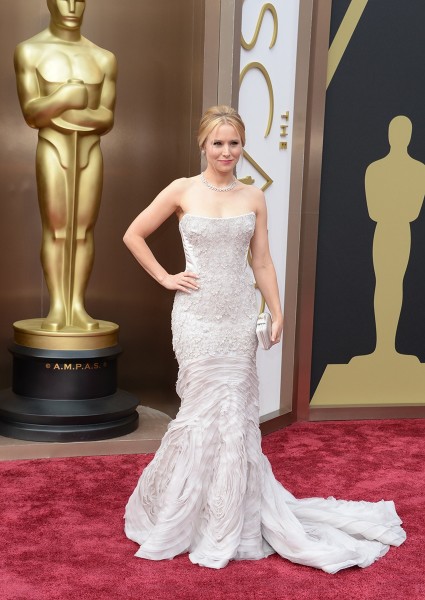 Staying true to the Frozen theme, Kristen rocked this gown by Roberto Cavalli. The icy colour looked great on her and although photos do not do it as much justice, watching her on the red carpet and at the awards show it looked simply beautiful. This dress was definitely the right choice for her. 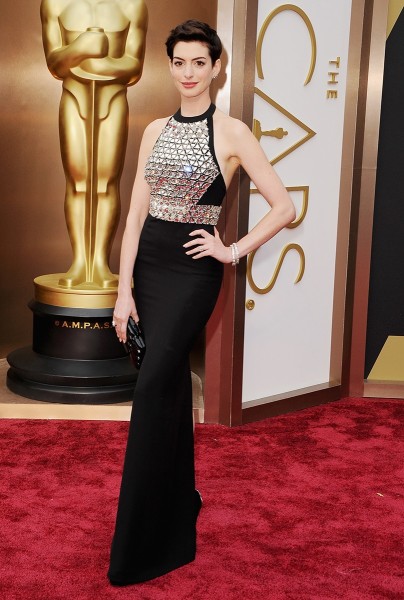 Very similar to the dress she wore last year, Anne seems to love the particular style of dress. While she did correct the chest area problem from last year, this dress was not one of the best on the red carpet. It may have been a bit more flattering had it not had the chest plate design on the front. The cut of the dress is flattering on her body, however whatever is happening with the silver on the front needed to go. 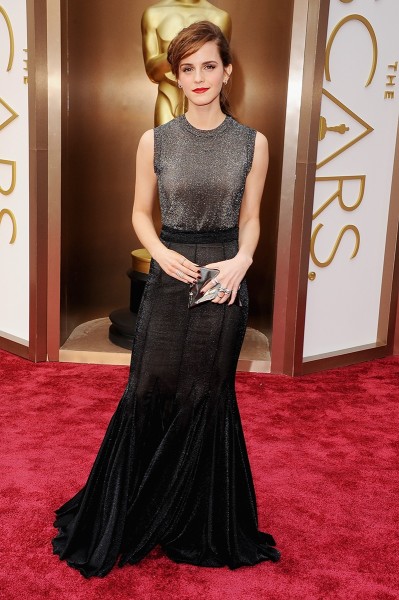 This did not seem like an Oscar-worthy gown, which is unfortunate seeing as it is by Vera Wang. It may have been better in another shade seeing as the colour made it look almost casual. It also did not seem to fit on Emma as well as it could have. The top of the dress looked more like a shimmery t-shirt than red carpet ready. It could have passed at a different awards show perhaps, but did not look very appropriate for the Academy Awards. 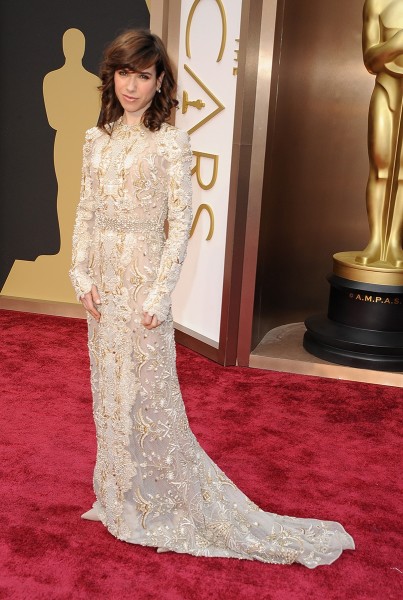 There was way too much going on with this gown. Between the long sleeves and the pattern, it was almost hard to focus on Sally herself. She played it safe with the simple jewellery, but the gown did not do her any justice. It seemed as thought the gown was weighing her down with all that was going on in the pattern, especially since it looked a little 3D. It was unfortunately a miss for Sally Hawkins on the red carpet. 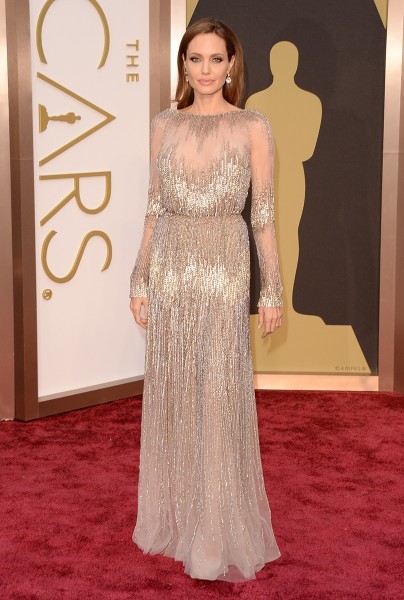 There was no leg showing here for Ms. Jolie. Instead she opted for a more covered look this year, but was it a smart choice? 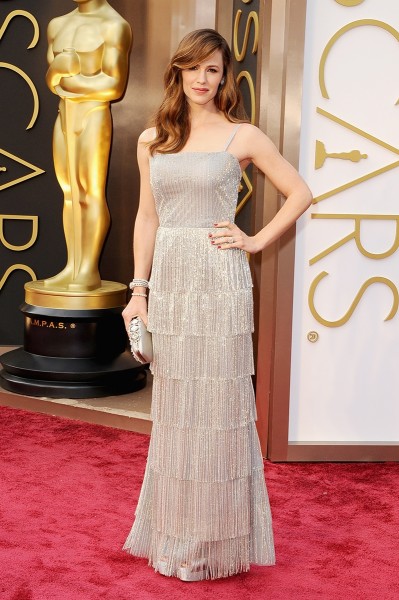 The Great Gatsby may have had an influence on this choice however, it may not have been the best one. When she moved and walked across the stage, the dress was fun to watch with the tassels, but when Jennifer stopped walking, it was not as appealing. Dresses with this many tassels on them should probably be left to a shorter length and off the Oscars red carpet.