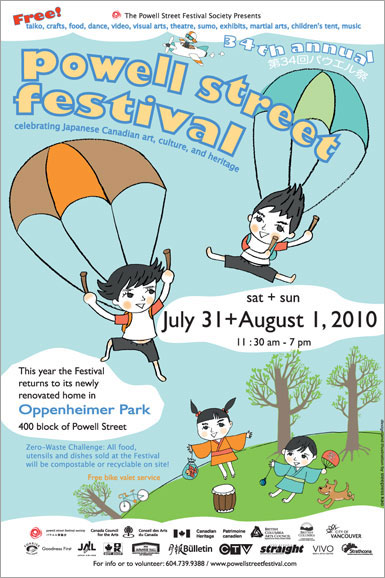 This weekend is the long weekend and also the 34th annual Powell Street Festival, the largest event of it’s kind in Canada. It’s the annual celebration of Japanese Canadian arts, culture and heritage that features something for everyone! Expect to see crazy dance performance, film and video, visual arts, intense martial arts demos, craft vendors and an amateur sumo tournament! For all you foodies out there will be a lot of Japanese food to tempt you during the festivals two day run. It’s free and it’s great to see historic Japantown or Little Yokohama as it was once know.
On a completely different note, I would love for the city to acknowledge and invest some money into Japantown and perhaps resurrect it.
Back to the festival. The Powell Street Festival is also the longest running community arts festival in the Lower Mainland. Furthermore, this year the festival will be once again held at newly renovated Oppenheimer Park. Last year it was relocated to Woodland Park. The 34th Annual Powell Street Festival celebrates the idea of neighbourhood, youth, children, the park and its landscape.