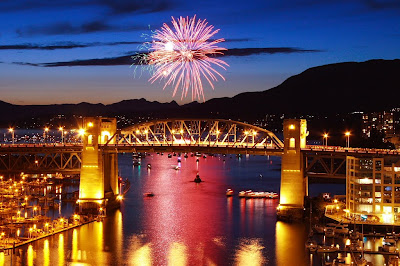 What’s spring time in Vancouver without the threat of cancellation of the annual Celebration of Light Fireworks in English Bay. This year the fireworks organizer is saying the are $350,000 short and have set a deadline for this Tuesday to come up with the funds or else the event will be canceled. Wow, didn’t see that coming.

We went through this crap last year as well, when The Keg stepped up and saved the event. Why don’t they step up again? Why can’t the committee solidify a sponsor for this event? Perhaps this year Cactus Club can step up and sponsor something in this city for once (forgive me if they sponsor something already because at this point I’m unaware of it). Besides it would make sense, since they have a vested interest in the festival now (see Cactus Club to open up on English Bay).

The fireworks generate an estimated four million dollars in economic activity. The City of Vancouver has allocated $600,000 and refuses to pony up the remaining shortfall. Where is the anti No Fun committee when you need them. Perhaps Raymond Louie isn’t a fan of the fireworks. Afterall, rumour has it he tried to run the UFC out of town.

I really don’t care who sponsors this event but somebody in the business community needs to step up, just like The Keg did last year. This the one event everyone in the Lower Mainland looks forward too (except NIMBY West Enders), some how we need to step up and save this event again.