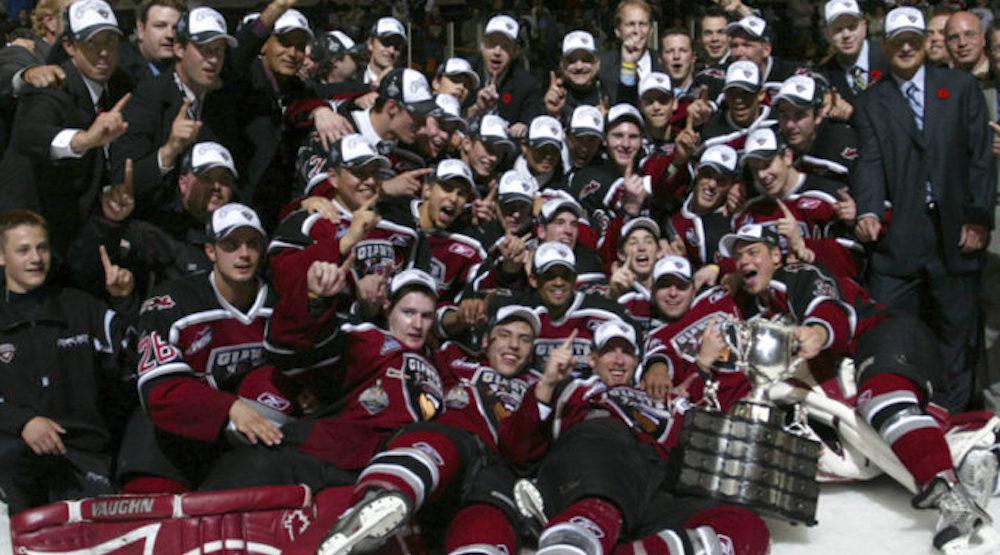 It’s been 10 years since the Vancouver Giants hoisted the Memorial Cup, the first and only in franchise history.

The G-Men did so on home ice at the Pacific Coliseum, defeating Willie Desjardins and the Medicine Hat Tigers 3-1 in the Final.

Great to have the 2007 Giants in town to celebrate the 10 year reunion of the @MCMemorialCup win! #BeAGiant #AlwaysAGiant #Champs pic.twitter.com/SYHgNoyX38

That team is back in Vancouver for a 10-year reunion this week, so what better time than now to take a look at what everyone is up to today?

Of the 23 players that suited up in the playoffs, 14 ended up seeing time in the NHL. Four of those players are still full-time NHL players, with one playing in the AHL, and nine playing professionally in Europe.

The MVP of the Memorial Cup, no player has gone on to more success professionally than Milan Lucic. He’s also the only member of the 2007 team to win a Stanley Cup.

Playing with Connor McDavid and the Edmonton Oilers.

A pending unrestricted free agent, Cody Franson played last season with the Buffalo Sabres. A veteran of 527 NHL games, he had some incredibly productive seasons offensively with the Toronto Maple Leafs.

A third round pick by the Calgary Flames, Lance Bouma also played games for another local team, the Abbotsford Heat. He’s played 304 games, all with Calgary, scoring 67 points.

Earning over $2 million per season with the Calgary Flames.

Evander Kane was just 16 back in 2007, and played a small role on the Giants. No player was drafted higher than Kane in the NHL (fourth overall in 2009).

Scoring goals and getting into trouble with the Buffalo Sabres.

Jonathon Blum was a first round pick by the Nashville Predators, but hasn’t been able to keep a consistent job in the NHL. After shuttling up and down between the NHL and AHL, he’s playing in the KHL. His wife stars in the show Hockey Wives, so you can follow his progress there.

Playing hockey not far from North Korea, ripping it up with Vladivostok Admiral of the KHL.

The Giants’ leading scorer in the playoffs and during the Memorial Cup, Czech forward Michal Repik was a second round pick by the Florida Panthers. He played 72 NHL games before returning to Europe.

Still a productive scorer with 16 points in 22 games with Sparta Praha of the Czech League.

The only player from the 2007 Giants to play for the Vancouver Canucks, Mario Bliznak played six NHL games, scoring one goal.

The Slovak centre is playing for Liberec Bili Tygri HC of the Czech League.

The 31st overall draft pick in the 2005 NHL Draft, Brendan Mikkelson played 131 games in the NHL with the Ducks, Flames, and Lightning. He made the jump to the Swedish Hockey League in 2015.

The Giants’ captain in 2007, Brett Festerling went on to play 88 NHL games despite being undrafted. He’s played the last five years in Germany.

He plays for the Nuermberg Thomas Sabo Ice Tigers (AMAZING TEAM NAME) in the top league in Germany.

Neil Manning played parts of 10 seasons in Vancouver with the Giants and UBC Thunderbirds.

He’s a star with Fassa Falcons in Italy, playing in the Alps Hockey League.

One of Vancouver’s best players in 2007, 5-foot-9 centre Wacey Rabbit never made it to the NHL. He played five seasons in the AHL and now plays in Europe.

Nearly a point per game player with Val Pusteria Wolves (in Italy) of the Alps Hockey League.

A third overall pick by the Atlanta Thrashers (remember them?), Spencer Machacek played 25 NHL games with the Thrashers/Jets and a ton more in the AHL. He made the move to Germany in 2015.

Playing with the Berlin Polar Bears (another great name) of the top league in Germany.

A fourth round pick by Tampa Bay, James Wright played 146 games with the Lightning and Jets.

He’s only appeared in seven NHL games, but Brent Regner is on the bubble with the Florida Panthers. He played the entire season in the AHL last year.

So close, he can taste it, with Florida’s AHL affiliate in Springfield.

Craig Cunningham is lucky to be alive after his heart stopped beating during the pre-game skate with the Tuscon Roadrunners of the AHL last year. He was forced to retire, but not before appearing in 63 NHL games. He’s now a pro scout with the Coyotes organization.

A huge part of the Memorial Cup team, Kenndal McArdle played in 42 NHL games, scoring one goal and three points. He retired in 2014 and is now an investment banker.

Vancouver’s starting goalie during their championship run, Tyson Sexsmith was a third round draft pick by San Jose. He played in the minors and overseas before retiring in 2013.

Sexsmith’s backup, Blaine Neufeld played one more season in the Alberta Junior Hockey League after winning the Memorial Cup, before retiring. He’s currently the head coach of the Surrey Eagles.

A 12th overall pick by the Minnesota Wild, AJ Thelen never panned out as an NHL player. After back and concussion issues, he retired in 2011.

After his junior career was over, Mitch Czibere played one year of university hockey before retiring in 2011.

A key member of the championship team, JD Watt played in the AHL and ECHL before ending his career with the South Alberta Institute of Technology in 2014.

The Giants’ second leading scorer in 2007, Tim Kraus never turned into an NHL player. He played a few years in the ECHL before ending his career playing in Scotland in 2013.

Mike Wuchterl moved on to the University of Lethbridge after his WHL career was over, retiring from the game in 2011.