I knew for sure I was in the right place when I saw the neon lights emblazing “XX” into the dark alley in a feisty pink.

She had recently had an exhibit with the same title as the name of her studio, featuring her 20 years of work. As Dina welcomed me into her studio with a delicious vodka orange juice, I took in my surroundings.

The tall white walls, decorated with pieces from her various projects, lead up to a glass ceiling that I imagined came in handy on bright sunny days. It was an open space, with only a desk in one corner and an old school kitchenette along a wall. A large, vintage, pink and white couch was placed along the opposite wall, under a photo of Dina’s Barbie and Ken eating breakfast from her “In The Dollhouse” series. 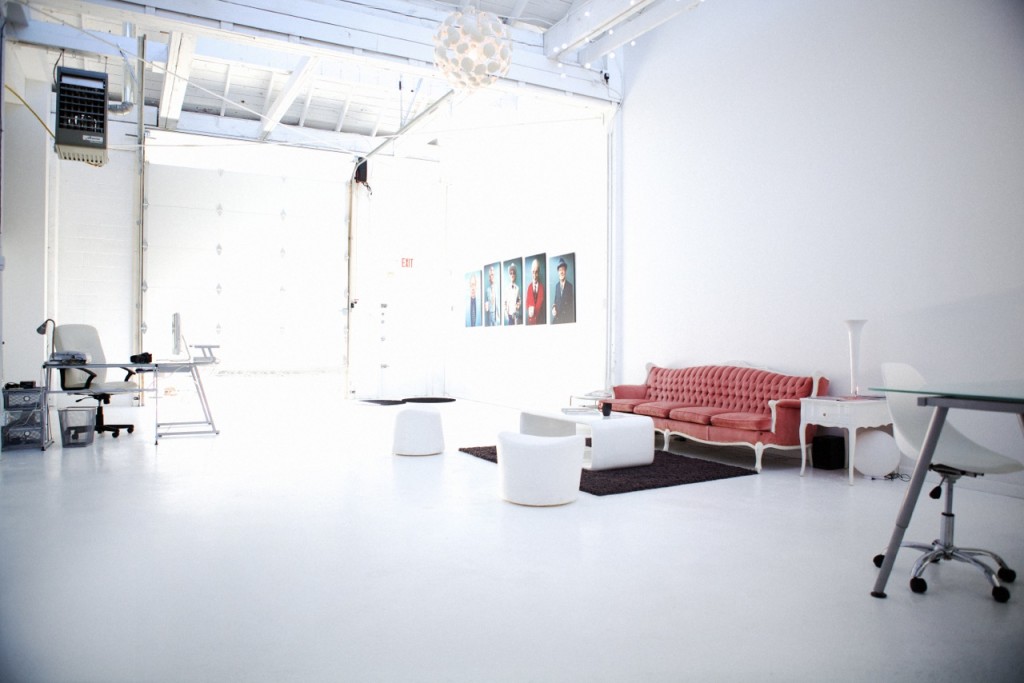 Sitting on her comfy couch, she talked about her early days as an artist and how she used to share a studio just a few streets over. I had done some research and knew she had been inspired for the “Fallen Princesses” series from her daughters’ interest in the Disney characters, and her own mother’s battle with cancer.

Dina told me that the aquarium had turned down her request to use it as a location for her Ariel image. She then realized everyone in the aquarium was taking photos and figured out how to blend into the crowd and still get the perfect shot!

The portraits of men lining the studio wall had been captured for her “Trackrecord” project and were regulars at the Hasting Racetrack. She became animated and passionate when talking about pop surrealism, pulling out books and exhibition catalogues to show me various artists that are involved in the movement.

A pop surrealist herself, Dina’s colorful, stylized images are obviously nice to look at, but upon closer inspection, contain very serious content begging the viewer to question the human condition. So now I’m thinking, maybe Ken wasn’t so into Barbie, and more into Barbie’s shoes. 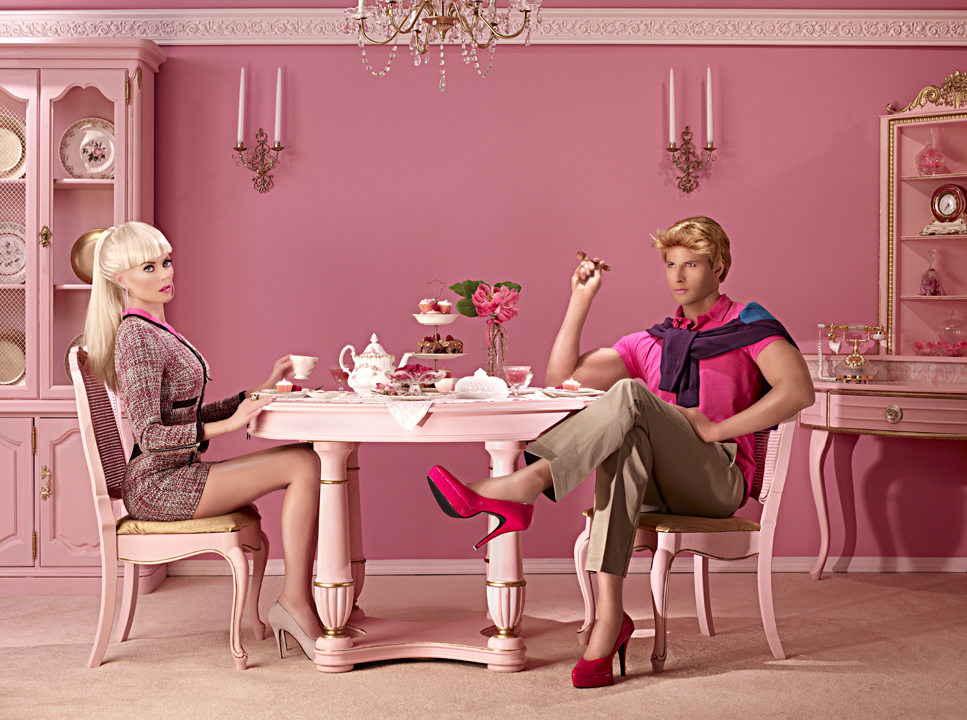 For more on Dina Goldstein, check out my interview with her below.

What lead you into a career as a photographer?
I was born in Tel Aviv, Israel. I moved to Vancouver with my family in 1976 and didn’t speak a word of English. I started photography at 22yrs; I was young and very eager. At the time I lived in Gastown and was surrounded by all kinds of artist: musicians, actors, painters, and photogs. I had a world of material to photograph. I set up a studio in my apartment and went for it. I worked part time at a photo supply store and in my spare time photographed anything and everything. I could get discounts at the store on equipment and processing, so it really helped me out.

At the beginning I thought that I wanted to be a photojournalist, so I traveled to Gaza and the Westbank in hopes of getting some good material that would help me break in. I came back from the Middle East with some good images and a new prospective. I soon realized that the sometimes isolated and often dangerous world of photojournalism was not for me.

I am a people person and really need my friends and family around me. I think that it was good for me to understand that early on in my career. Instead I began to pursue editorial photography, which was more suited for me. I then went on to work with some of the best art directors in the city on selected commissioned jobs. 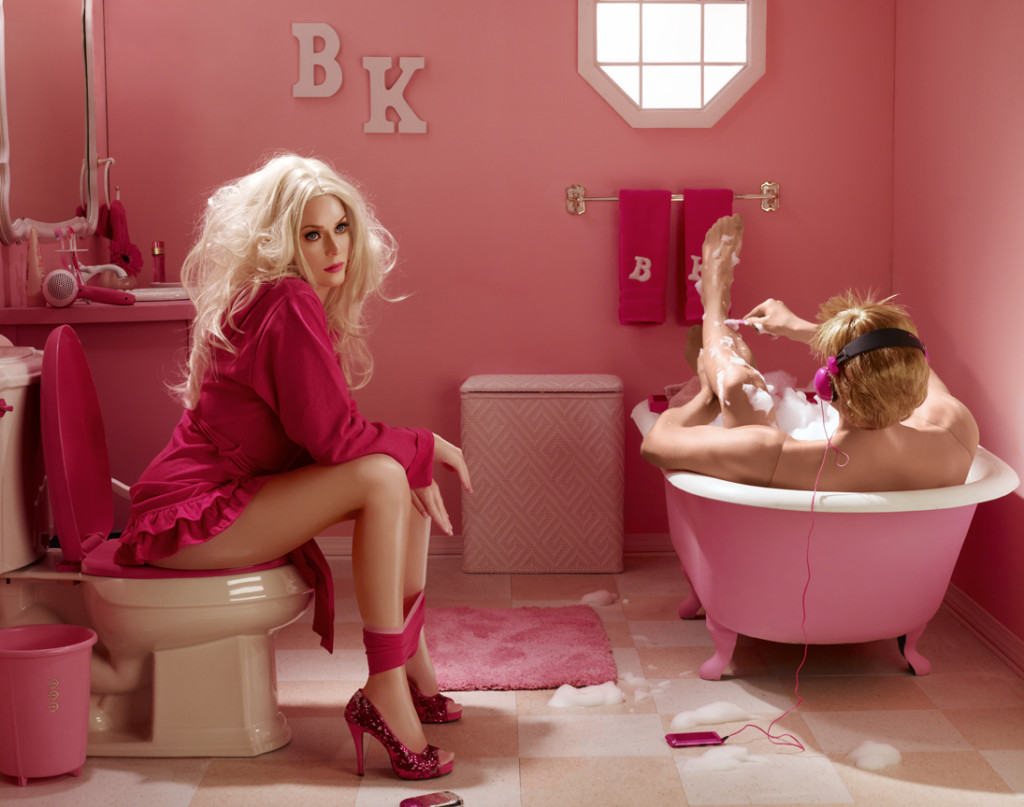 Are there any artists who inspire you, or you consider a role model?
Many artists and types of art inspire me. I love and respect all forms of arts and crafts. I try not to be influenced by artists around me and sometimes wear blinders to maintain focus. I just saw an exhibit of Classic Dutch painters… the detail and attention to light was most inspiring.

I started out most inspired by Diane Arbus, Margaret Bourke White, and Dorthea Lang. Also many more Life photographers, as my first love is photojournalism and documentary photography! Today I consider myself a POP Surrealist and love the work coming out of this movement. 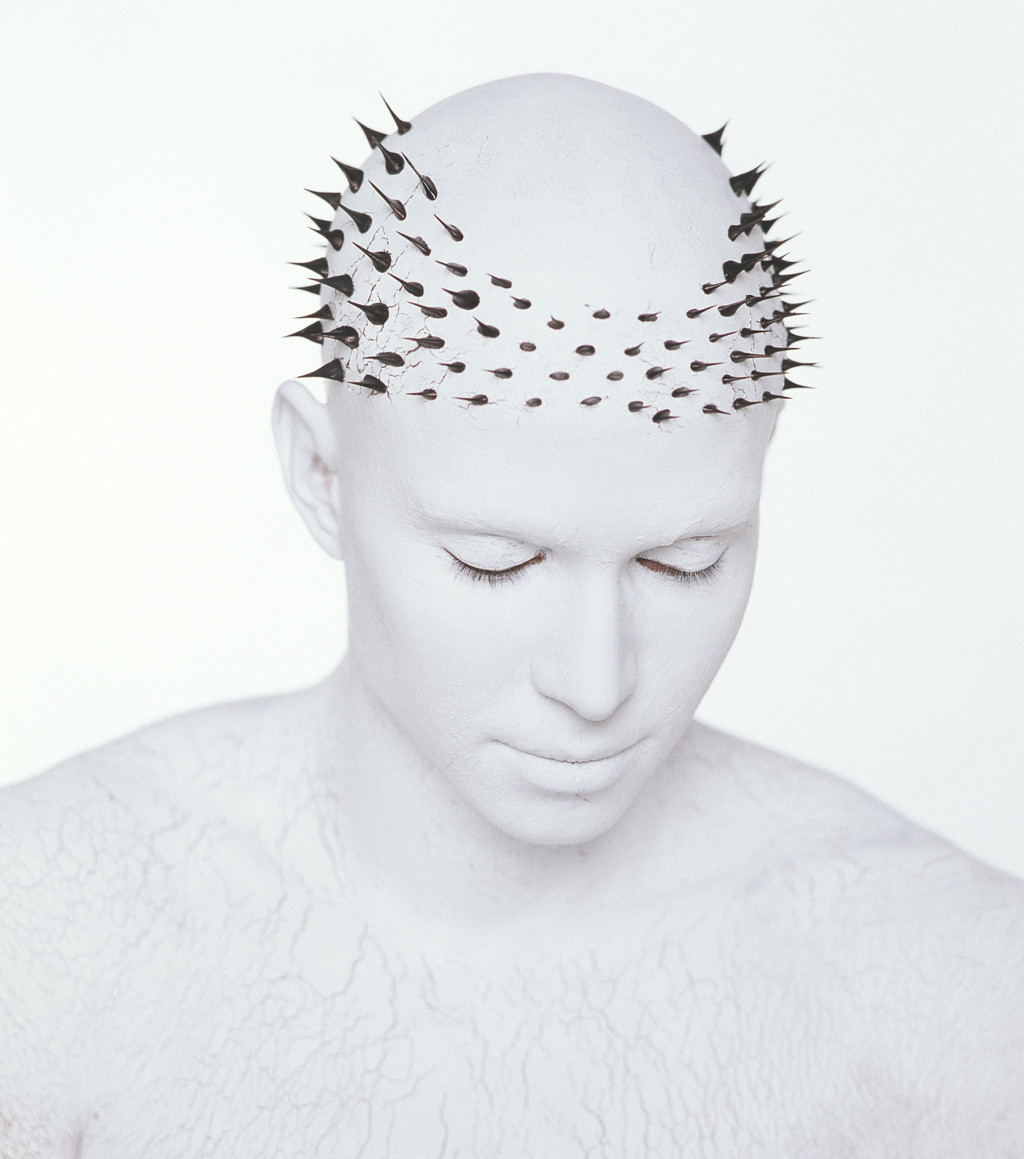 Can you walk us through your process?
I come up with concepts and themes that inspire me. I produce large-scale projects. My sets are either built or created on location in the Lower Mainland. I find my models (characters) in and around the Vancouver area.

I met my Snow White at a wedding, Cinderella was a hostess at a restaurant, Red was a clerk at a lingerie store, Rapunzel and Pea were models, Belle is an actress and a friend. Jasmine was cast through Craigslist and shot in L.A. I met Ariel at a fashion show and Beauty was also cast from Craigslist. Some took me a long time to find and others just appeared out of the blue.

Reghan Blake and Nathaniel Campbell, who portrayed Barbie and Ken in, “In The Dollhouse”, are local actors. My team is made up of an amazingly talented crew of makeup & hair artists, stylists, costume and prop makers, lighting assistants and digital experts; also, many eager volunteers that come out to help and to gain experience on set. They come from all over the world and love to participate.

*Local Vicky Chan, brilliantly executed the makeup & hair for both “Fallen Princesses” and “In The Dollhouse”.

To get a good idea of the scope of my process, check out The Making video of “In The Dollhouse” 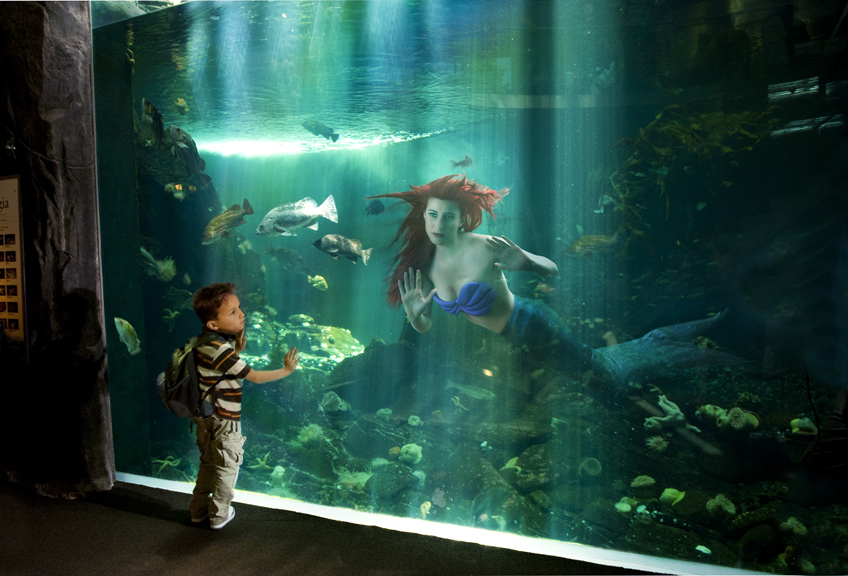 What is life like for you as an artist?
In previous years I was shooting mostly editorial and advertising assignments. Vancouver is vibrant with creative conceptual work and I enjoy working with the art directors in the city. Last year I opened up my own studio, XX, it’s off the eclectic ‘Drive’. I decided to focus solely on my artwork and the production of my large-scale projects.

I am now represented internationally and exhibiting regularly. Since I was awarded a Canada Council grant, I was able to go into production on my new series. I have completed five of my ten pieces and continuing on with the remainder this year. I’m also a wife to Jonas (my filmmaker husband) and a mom to two daughters Jordan, 8 and Zoe, 4, so life is quite busy! 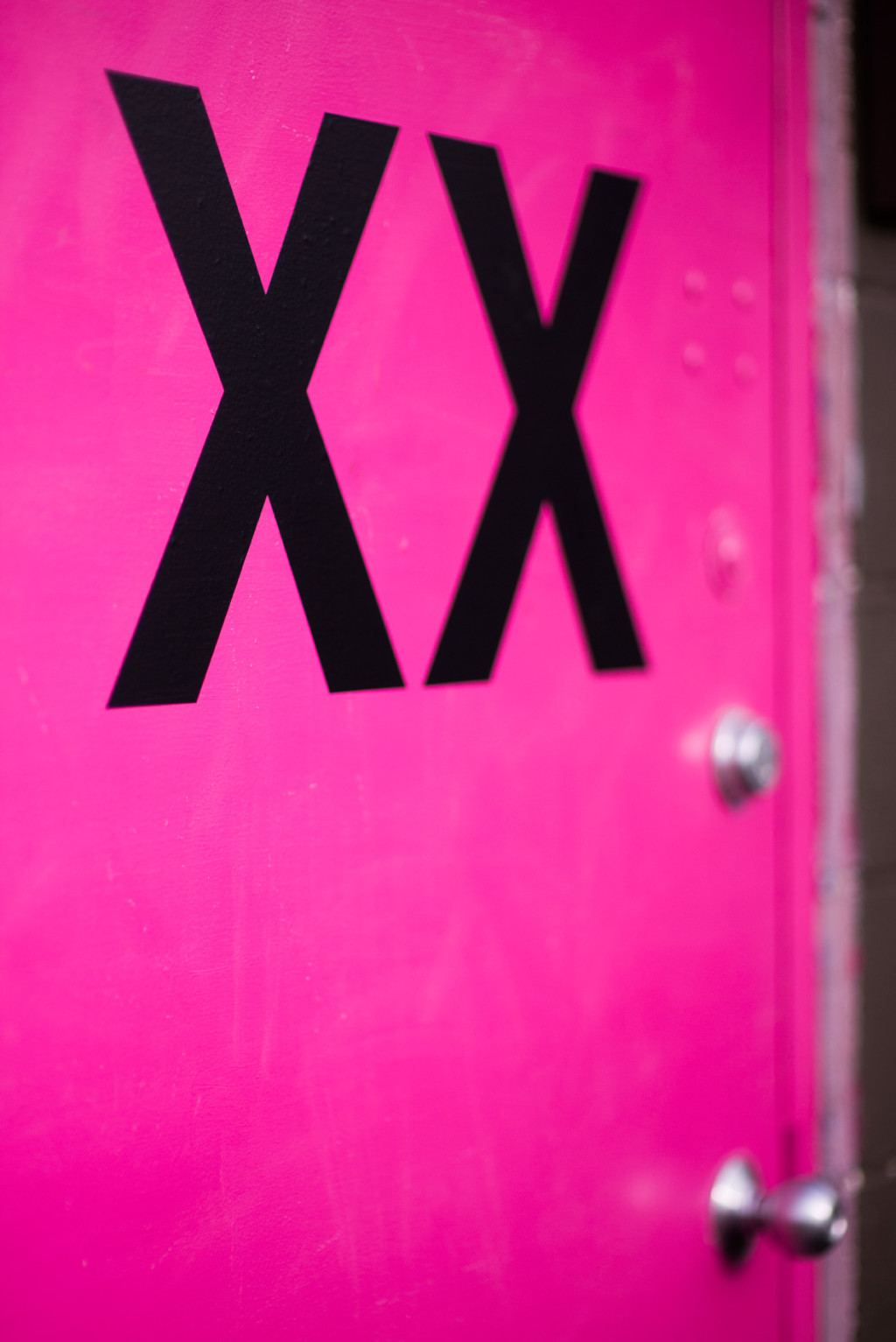 Was there any specific event that assisted in you becoming an international artist?
My venture into the art world and international attention happened quite unintentionally. In 2009 I posted the “Fallen Princesses” series on JPG.com (a photo community), just to get some feedback from my peers. It was then taken and posted on several sites. Almost overnight it went ‘viral’ and the response was overwhelming. My server was overloaded and the fallenprincesses.com site had to be taken down until my provider could figure out a solution.

The project struck a cord with people all over the world. Since then I have received hundreds of emails, some of them very personal and touching. The series has been published in hundreds of magazines and newspapers and is often discussed in Essays and dissertations. The work has received awards and recognitions, and has been shown in galleries and museums internationally. “In The Dollhouse” had a similar response and still continues to be discovered and discussed online and in print. 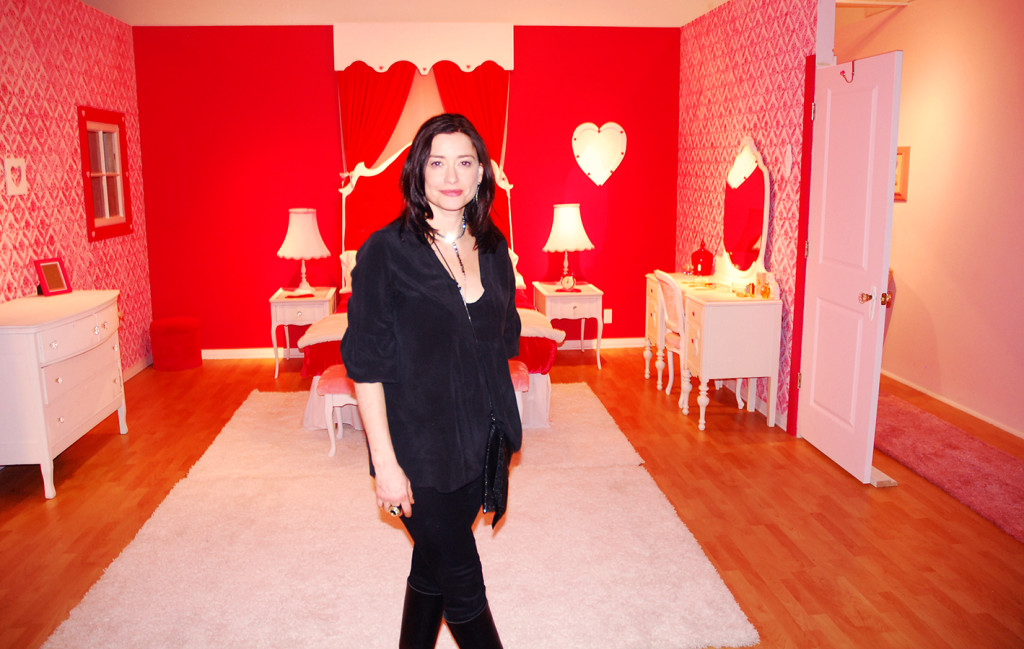 What is the best part of having a studio and being an artist in Vancouver? Any challenges?
I think that being an artist is a challenge anywhere in the world! I’m proud to be based in Vancouver where I work out of my studio, which is a few minutes away from D/T and a five-minute drive to my home, close to the PNE. Many years ago my husband and I considered moving to Los Angeles to pursue our careers. Jonas (Quastel) is an independent filmmaker and LA would have been a good place for him.

Also, there would be so much more opportunities and paying gigs for the both of us in the States. Many of our friends left Vancouver, in fact both of my best friends made the move. Instead we decided to stay in this beautiful and evolving city, where we could stay close to our family and friends. Now that we have a family of our own we are glad that we persevered through those tough years, because Vancouver is a terrific place to raise children.

I’m also fortunate that this city is so culturally diverse; it’s good for casting and location hunting which is such a big part of what I do. This year Vancouver saw it’s first Photography Festival, Capture. Also our local museums, public galleries and commercial galleries are showing some interesting work… so I’m hopeful that Vancouver will continue to flourish in the arts. 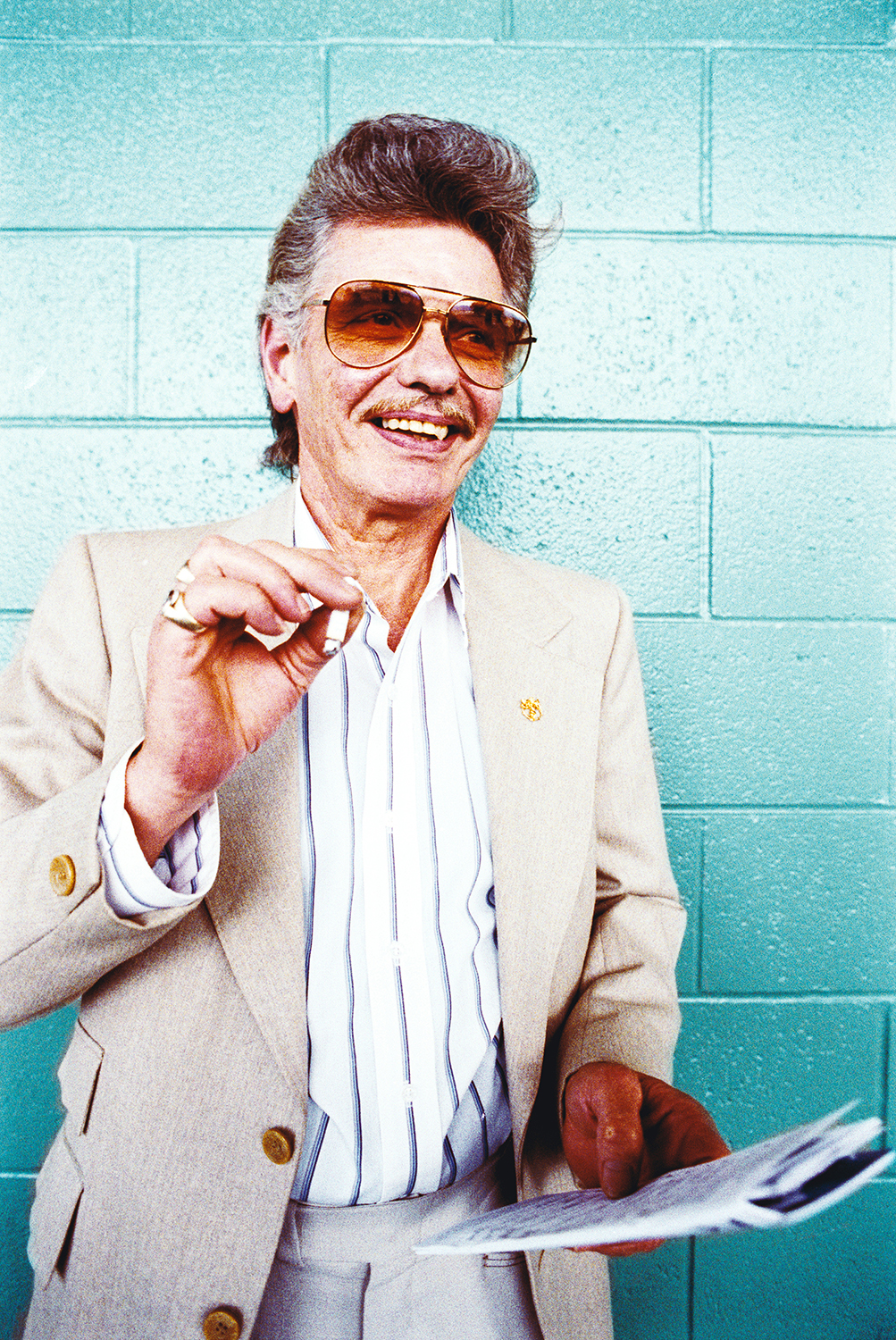 What is your favorite art piece or body of work you’ve completed so far?
All of my pieces are special to me for different reasons. They are like my children, individuals that cannot be compared to each other. I go through phases where I’m really attached to one image, because that is the one that I most relate to at the time. Right now I’m working closely with images from my new series, so my new favorites have yet to be seen. 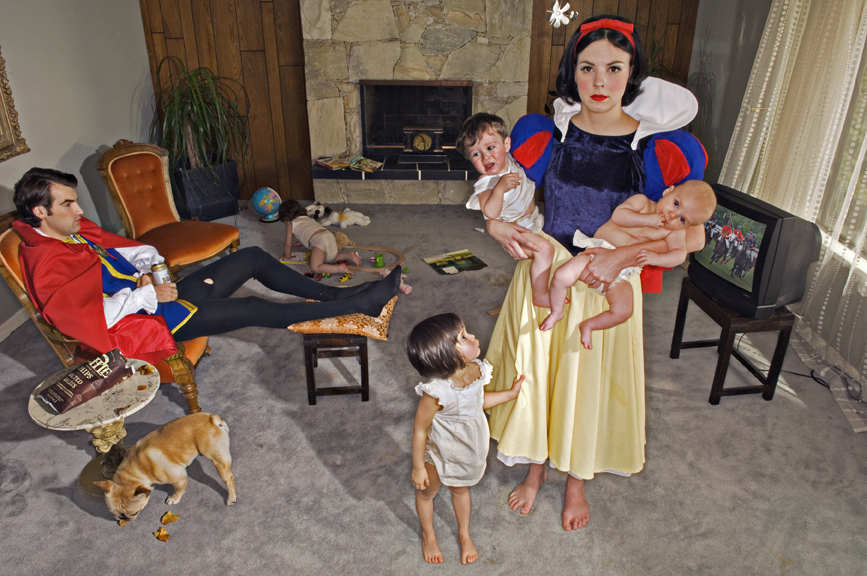 What are you working on right now?
I am in production on my new series, “Gods of Suburbia”. It will be a highly stylized and creative analysis of the important role that religion plays in peoples’ lives throughout the world, despite secularism and modernity. The series will play with parables that continue to give religions their relevance. It will be a 10-part series realized as 70” X 100” transparencies framed in light boxes. I’m also working on my debut book STORYOGRAPHY that will be ready soon. 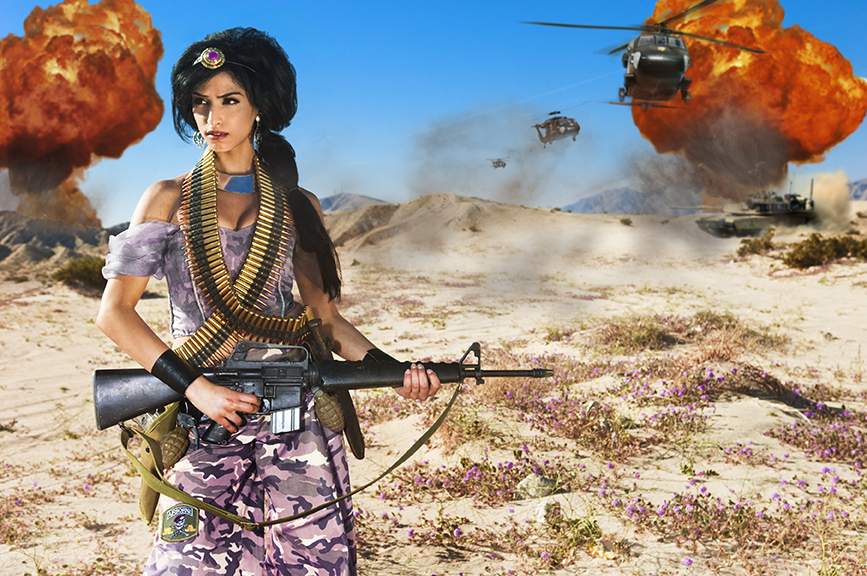 Is there any advice you’d like to give to the prospective artist readers of Vancity Buzz?
I find that a lot of young aspiring artists today are passionate but lack work ethic. When I started out I worked a lot and didn’t make much or any money. That went on for years. We see a lot of artists coming out of school and expecting to make the big bucks right away. I say pay your dues and don’t charge too much right off the top.

Get as much experience as possible and make your mistakes at the beginning without too much consequence. Work up to getting the prestigious jobs. Try to develop original ideas and have your own projects on the go. This will only help you grow as a person and as an artist. Don’t limit yourself, take chances.