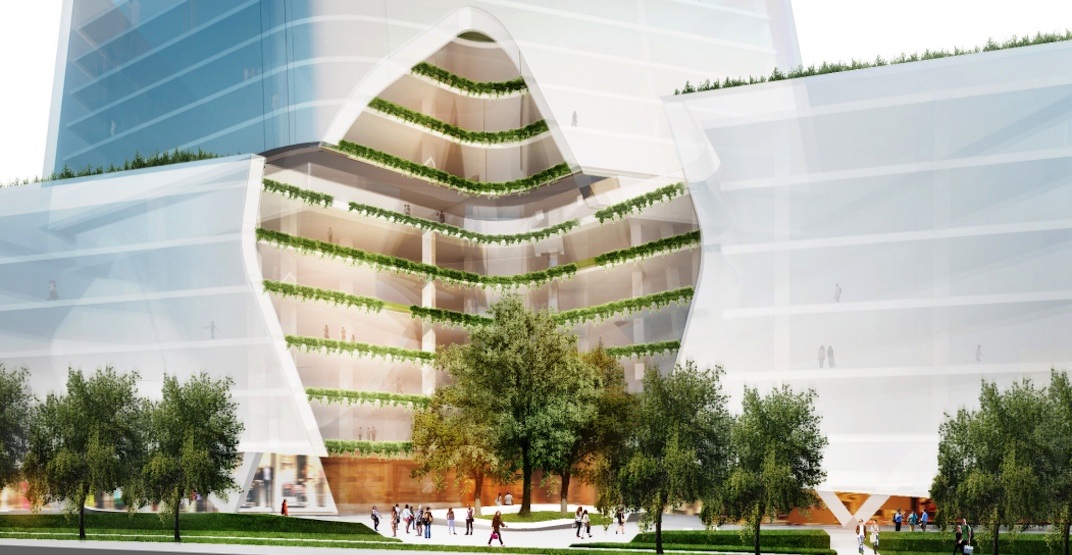 lululemon is seeking to further solidify and expand its hometown roots in a very big way.

The company says it has outgrown its existing facilities in Vancouver including the global headquarters in the Kitsilano neighbourhood, and is now proposing to build a new and expanded purpose-built office building — called the Store Support Centre — on a site in the False Creek Flats. 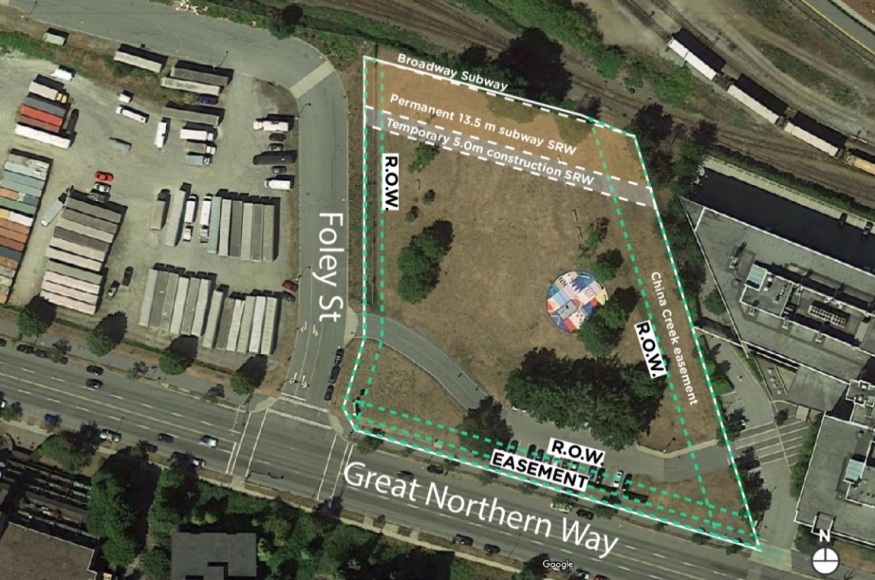 There could be a new 11 to 13-storey office building, including a podium of approximately six storeys, on the site, creating roughly 580,000 sq. ft. of floor space.

“As our business continues to expand, we have outgrown our current Store Support Centre and occupy multiple locations across the city. To achieve our many ambitions going forward, we need to have the best talent together under one roof and significantly increase the size of our employee-base at our Vancouver Store Support Centre,” Erin Hankinson, the director of global corporate communications for lululemon, told Daily Hive in a statement.

“We’re committed to developing great leaders, retaining exceptional talent, and being the place where people come to realize their full potential.”

The company has enlisted Morphosis Architects — an internationally-renowned firm with offices in New York City and Los Angeles — to design the tower, with further contributions by Francl Architecture, Brook Pooni & Associates, and Colliers Project Leaders. 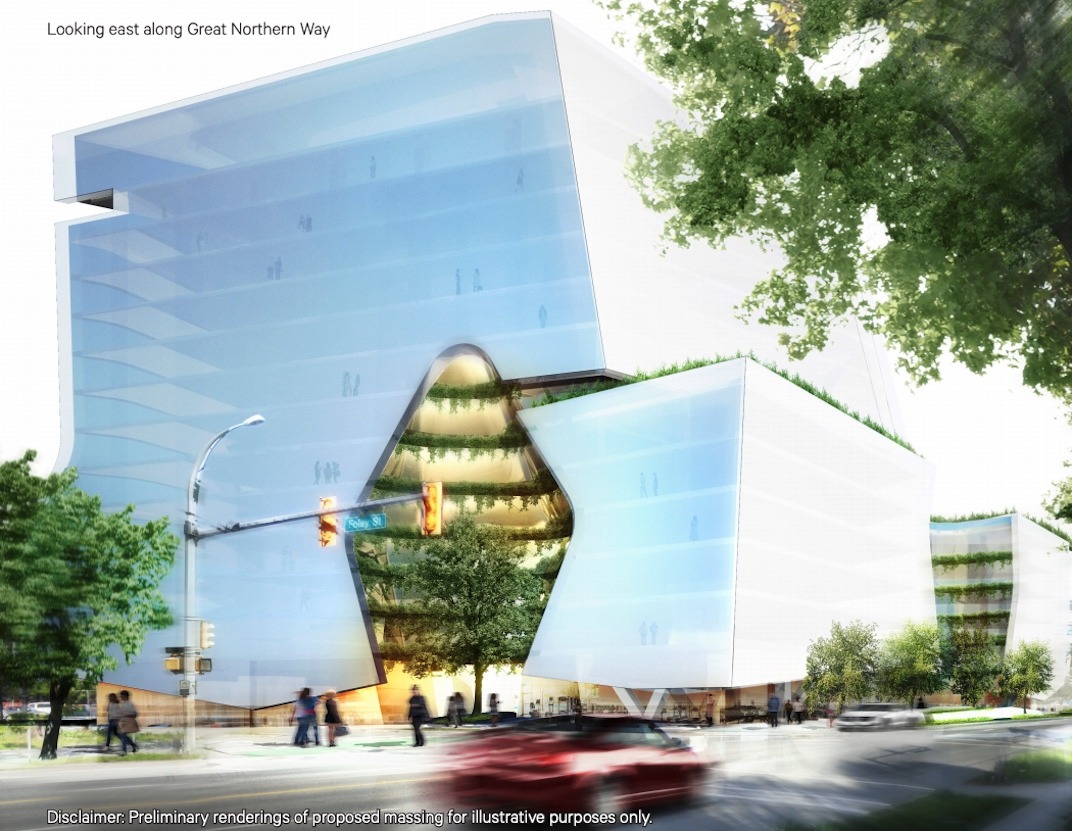 Highly preliminary design concepts of the new headquarters, provided to Daily Hive, show an irregularly-shaped building form, with carved out sections that expose more of the interior to the exterior, making space for void spaces with trees. The largest of these voids is along Great Northern Way, which opens up to a large public plaza.

As well, the exterior on the lower floor has been carved out from the building’s upper envelope to create a curtain-lifting reveal appearance. 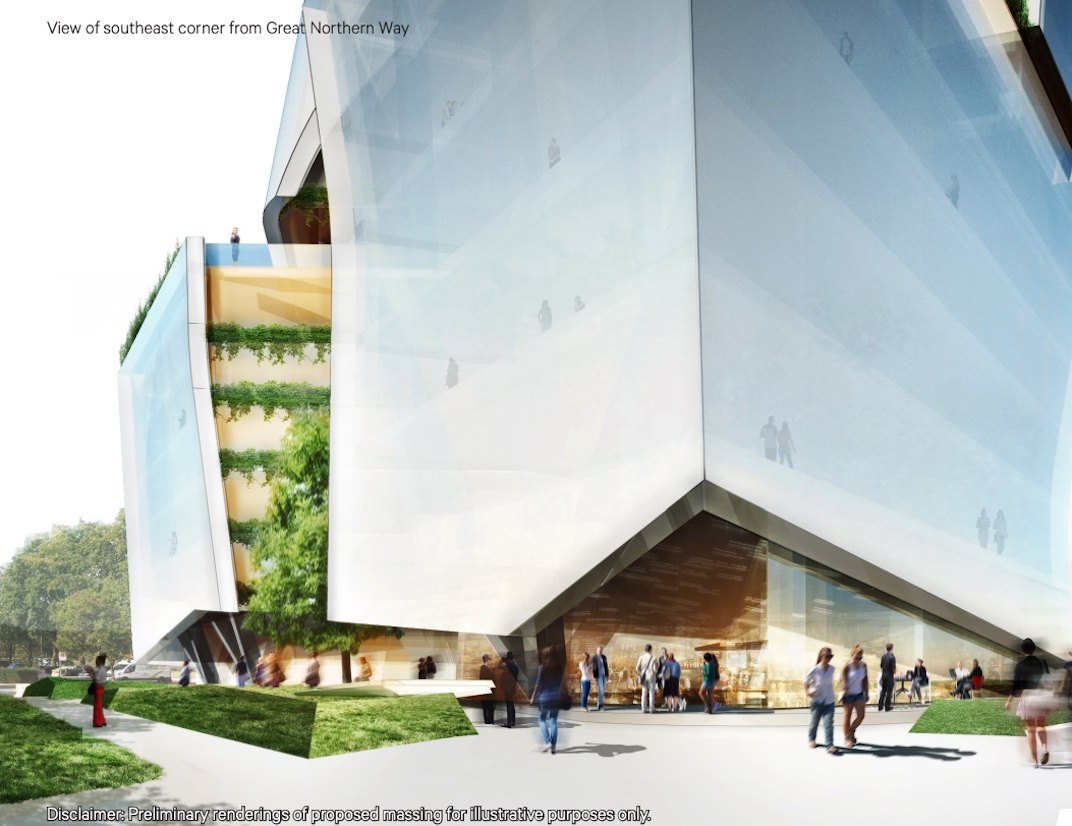 This proposal is still highly preliminary; no formal rezoning application has been submitted at this time, as the project is still in its pre-application phase.

However, in late April, lululemon received a preliminary-stage green light from Vancouver city council, which granted the company a rare exception from the temporary rezoning restriction enacted last year for the Broadway Corridor planning process.

This effectively allows lululemon to submit a rezoning application for city council’s further consideration, as the proposal would align with the municipal government’s 2017-approved False Creek Flats Plan of increasing employment in the area from 8,000 to 30,000 jobs and supporting innovation, creative and digital businesses, healthcare and life sciences, and food and service industries.

No additional density is being sought, but the proposal is seeking greater height allowances — from the existing limitations of 120 ft to up to 250 ft — to enable the creation of setbacks from Foley Street and Great Northern Way for walking, cycling, and landscaping, including a new China Creek public space.

Additional height would also allow for urban design creativity to maximize views to the North Shore Mountains and to minimize shadowing on the public spaces. 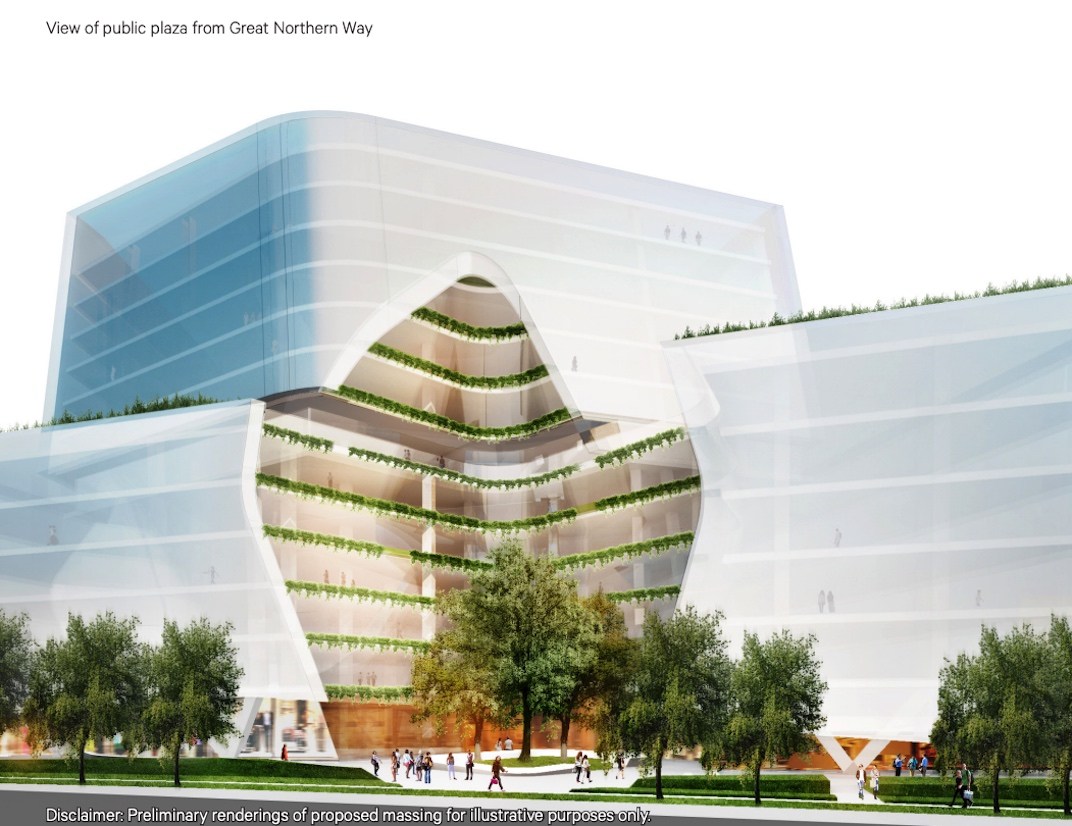 The close proximity of lululemon’s planned new home to two SkyTrain stations could prove to be a major attribute for attracting and retaining labour talent, compared to the relatively isolated existing headquarters location in Kitsilano.

“By investing in our new proposed office at 1980 Foley Street, we’ll be able to seize the many opportunities ahead for our growing business, while creating new jobs in our home market and giving our current and future employees a place they can truly sweat, grow and connect,” continued Hankinson.

The proposed size of this new office location is more than four times the size of the athletic clothing retailer’s existing 130,000-sq-ft headquarters at 1818 Cornwall Street. In 2011, the company acquired the 1941-built Kitsilano office building, which recently saw an assessed value of $72.5 million.

The False Creek Flats property, in contrast, is assessed at $79.4 million — up from $49.4 million during the previous year.

In recent years, a cluster of office buildings catering to these businesses and industries have emerged in this area of Great Northern Way.

To the east is the MEC head office and the site of the future 10-storey headquarters of Nature’s Path, which is currently based in Bridgeport in North Richmond. Shaw Communications also recently sold its city block-sized warehouse and service hub at 1155 East 6th Avenue for the site’s office development potential. 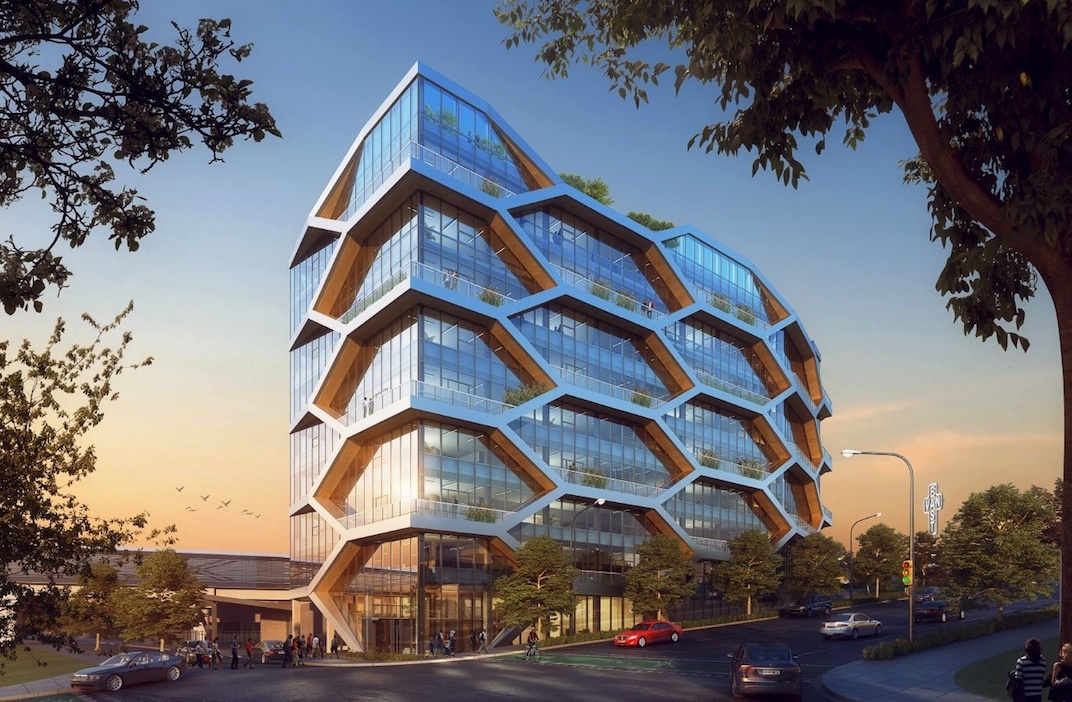 South Flatz is the first of six office buildings planned by PCI Development for the area along Great Northern Way. When all of the buildings are completed in the mid-to-late 2020s, there will be about two million sq. ft. of office space by just this one developer alone.

With the anticipated 2025 completion of the Broadway Extension, and with the guidance of the False Creek Flats Plan, the area is increasingly becoming an attractive location for offices and creative industries. 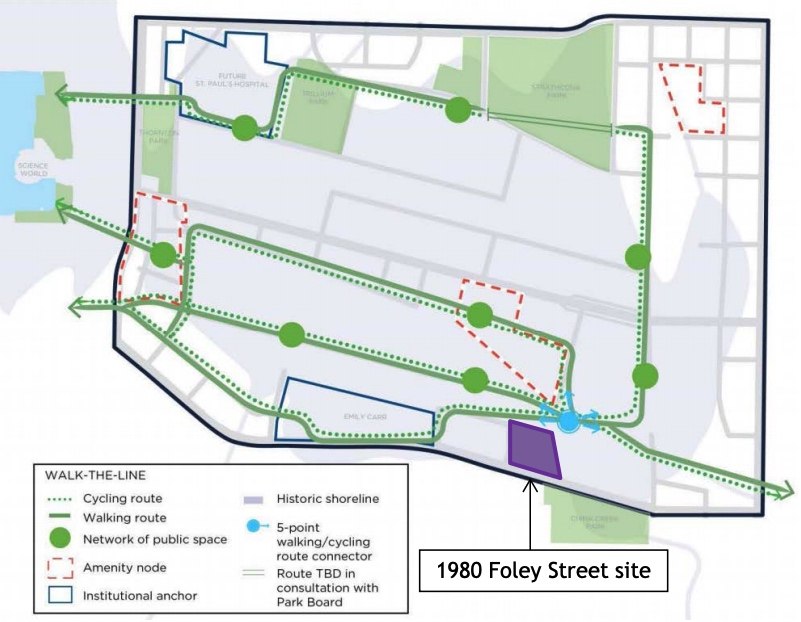 The location of 1980 Foley Street in relation to the False Creek Flats area in Vancouver. (City of Vancouver)