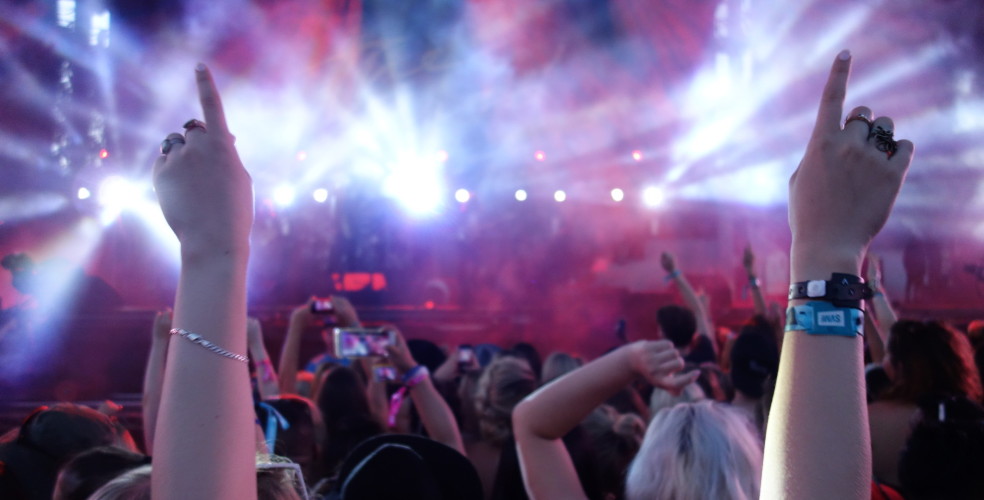 Believe it or not, it’s almost festival season.

With our weak Canadian dollar, and organizers outdoing each other with great line ups, it’s going to take a lot more planning to figure out which music festivals to attend this year. Coachella recently announced their line up, and soon others will follow. And with these announcements, our bank accounts shrink as we stack up on those sought after festival wristbands.

But music and summers (and spring and fall and winter) go hand-in-hand, and some of the big festivals are in our own backyards, so we’re excited. As we prepare for this year’s music festival season, here’s a list of 18 festivals to help you save the dates and plan your future roadtrips.

The spring edition of San Diego’s CRSSD Festival returns to the city’s Waterfront Park in March. After its successful debut year, which included a spring and fall edition, the predominantly electronic music fest is back with a heavenly lineup that includes Odesza, Chet Faker, Gorgon City, and Tycho – among plenty of others. This is for those looking to start their festival season early, with a little dance in a beautiful city.

Get started early and locally! Vancouver’s Seasons Fest is all about the music, new media art, and technology, and takes place over 5 days all over the city. This year’s lineup is stacked with big names and local artists alike. Porter Robinson, Odesza, Knife Party, and Duke Dumont are some of the headliners, but be sure to catch local loves Humans, Ekali, Expendable Youth, and the Monstercat showcase while you’re there.

The festival that needs no introduction. Probably one of the most expensive festivals you’ll go to this year, Coachella is all about the glitz, glam, and pool parties. Coming from a Coachella alum, find the epic/random pool parties because you never know who will be DJing (we wound up at the Roots’ party one year). Oh and the headliners of course. This year includes the reunion of Guns N’ Roses, LCD Soundsystem, Calvin Harris, among a ton of others.

One of our favourite reasons to roadtrip south is back on May 27. Sasquatch Festival in the beautiful Gorge is a sign of summer, with the warm camping and stage backdrop immersed in nature. Sasquatch’s eclectic mix of music adds to the beauty of the long weekend in May. The recently announced line up includes The Cure, Disclosure, Florence + The Machine, and A$AP Rocky.

Probably less known on the West Coast, but the Governors Ball has us wanting to fly East with this year’s stellar line up. The music festival takes place on Randall’s Island in New York- and who wouldn’t want a NYC summer trip anyway? And with Kanye West, The Strokes, The Killers, Beck, Death Cab for Cutie, M83, Chet Faker, Bloc Party, and Miguel there this year, there are just too many reasons we wouldn’t want to fork out the cash and have a ball in New York.

Returning for its 15th year, Bonnaroo is one big reason you should make your way down to Tennessee. The annual fest takes place on a 700 acre farm southeast of Nashville, in Manchester, Tennessee. As a music lover, Nashville was one of my favourite cities to visit in 2015. Although the line-up hasn’t been announced yet, there are bound to be some epic headliners on the bill. And make sure you spend some time in Nashville while you’re in the hood.

Originating in the UK, Bestival made its way across the ocean for the first time last year and put on one hell of a festival in Toronto. Located a ferry ride from the heart of the city, Bestival took place on Toronto Island. The festival is not only about the music, but encourages costumes and festival-goers get dressed up for the two day fest. With an incredible diverse line up in its first year, this year’s line up should be bigger and better. And if all else fails, you’re on the island and have the best view of Toronto’s skyline.

Blueprint’s FVDED In The Park is scheduled to return to Holland Park in Surrey this year. The two day, two stage festival includes a variety of music genres, and is Vancouver’s own backyard. Although it would be tough to top headliners Deadmau5 and The Weeknd from last year, Blueprint doesn’t disappoint. Once the tickets go on sale, and line ups are announced, one and two day passes will be available.

A West Coast fave, Pemby Fest is set to return in all its glory. The four day music, comedy, and general awesomeness festival still hasn’t announced line ups or even dates, but it has already sold out its early bird tickets. For those trying to see specific artists this year, the Pemberton website still has an “Artist Survey” available for those wanting to send in their input.

A lesser known B.C festival, Rock The Shores had a great line up of bands in 2015 which included the Black Keys and Jane’s Addiction. The festival is attracting bigger names, and is at a fraction of the cost of other festivals in the province. If alternative rock is your jam, check out this year’s Rock The Shores. Line ups are still not announced, but passes are on sale.

Montreal’s Osheaga Music and Arts Festival has been an East Coast staple for the last 10 years. As a former Montreal resident, this is a highlight of summer for many in the region- but its also a festival that attracts us back East at the end of July. Besides Montreal’s boasting nightlife and epic summer weather, Osheaga’s normally massive roster of artists should be a good reason for you to visit. And don’t forget the poutine.

Drake’s OVO Fest is a one of a kind. The 6 God has proven year after year why Torontonians, and out of towners, shouldn’t miss OVO Fest. Often falling on the same weekend as Caribana, the Fest is mostly known for Drake’s annual surprise guests. This has become one of Toronto’s biggest local festivals, and if you’re a Drake fan and haven’t been to one yet, keep an eye out for the line up announcements and ticket sales around March. This is definitely going to sell out.

One of British Columbia’s most popular summer festivals returns this August. Surrounded by the beauty of the forests and mountains, this multi-genre festival always guarantees headliners that will bring your excitement levels to its max. Keep checking their website for line up and ticket announcements. We’re excited for this one.

Calgary’s Chasing Summer has brought some of the world’s biggest electronic dance music producers to the city over the past few years. The two day festival celebrates summer and EDM at the historic Fort Calgary, and the 18+ event allows you to have alcohol anywhere on festival grounds (which is so rare in festival world!).

The world-known Shambhala Music Festival continues to be one of BC’s must-attend summer festivals. The corporate-free celebration of music, arts, and life has been delivering unforgettable experiences to its beloved attendees (its family) since 1998. Tickets for its 19th year are already on sale, but line ups will be announced later this year.

This four-day multi venue fest has had some impressive talent and artists come through in past years, and 2016 should be no different. The Victoria, BC, festival is also very reasonable in cost. Past headliners have included Modest Mouse, Joey Badass, and Kiesza. Expect this year to have a similarly solid mix of artists, and lots of awesome Canadian content. And it’s on Vancouver Island, which is also awesome.

When I first came across this festival, I was surprised I hadn’t heard of it before, so I am happy to share the Voodoo Music + Arts Experience with you. This multi-day festival takes place in New Orleans around Halloween weekend, and has been nominated twice for Pollstar’s Music Festival of the Year. The website describes it best, “Voodoo is a musical gumbo stirring together music, art, community, cuisine, and everything else under the sun and above the Louisiana swamps.”

Which festivals are you most excited about?