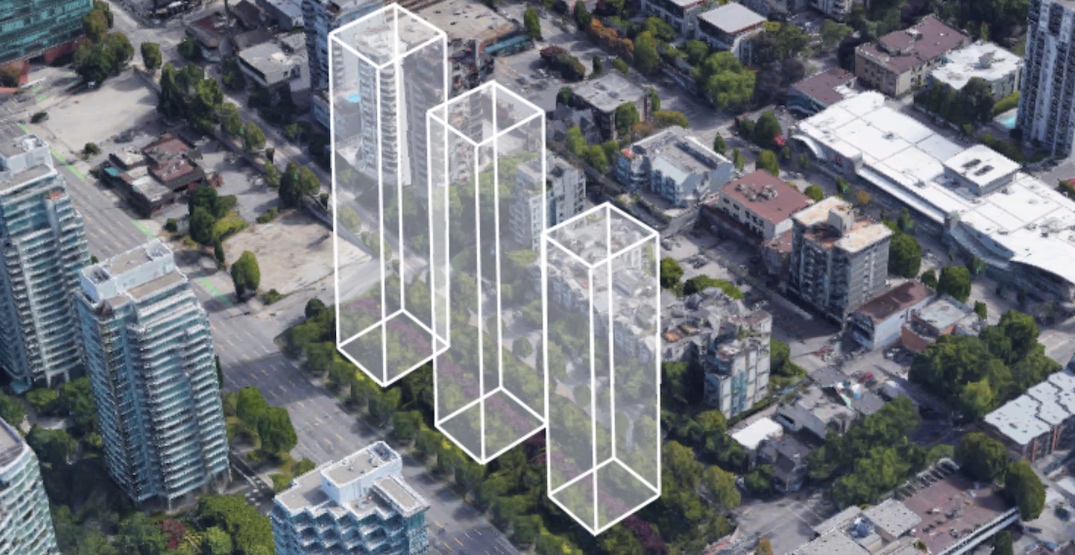 A condominium owner in downtown Vancouver is rallying the support of over 140 other strata owners to explore the interest of selling their complex to a developer for the site’s high-density, upscale residential redevelopment potential.

The reason? Homeowners can expect a windfall, far above the current undervaluation, despite being one of the best parcels along West Georgia Street on the border of Coal Harbour and the West End.

The existing 1997-built complex at 1723 Alberni Street — the southwest corner of the intersection of West Georgia Street and Bidwell Street, just across from the former Chevron gas station site — occupies most of the city block.

It currently entails a 23-storey tower on the Bidwell Street end of the property, but most of the site is occupied by a low-rise structure with townhomes. The floor area ratio density is relatively low for its high-profile location, with a floor area that is just three times the size of the lot. 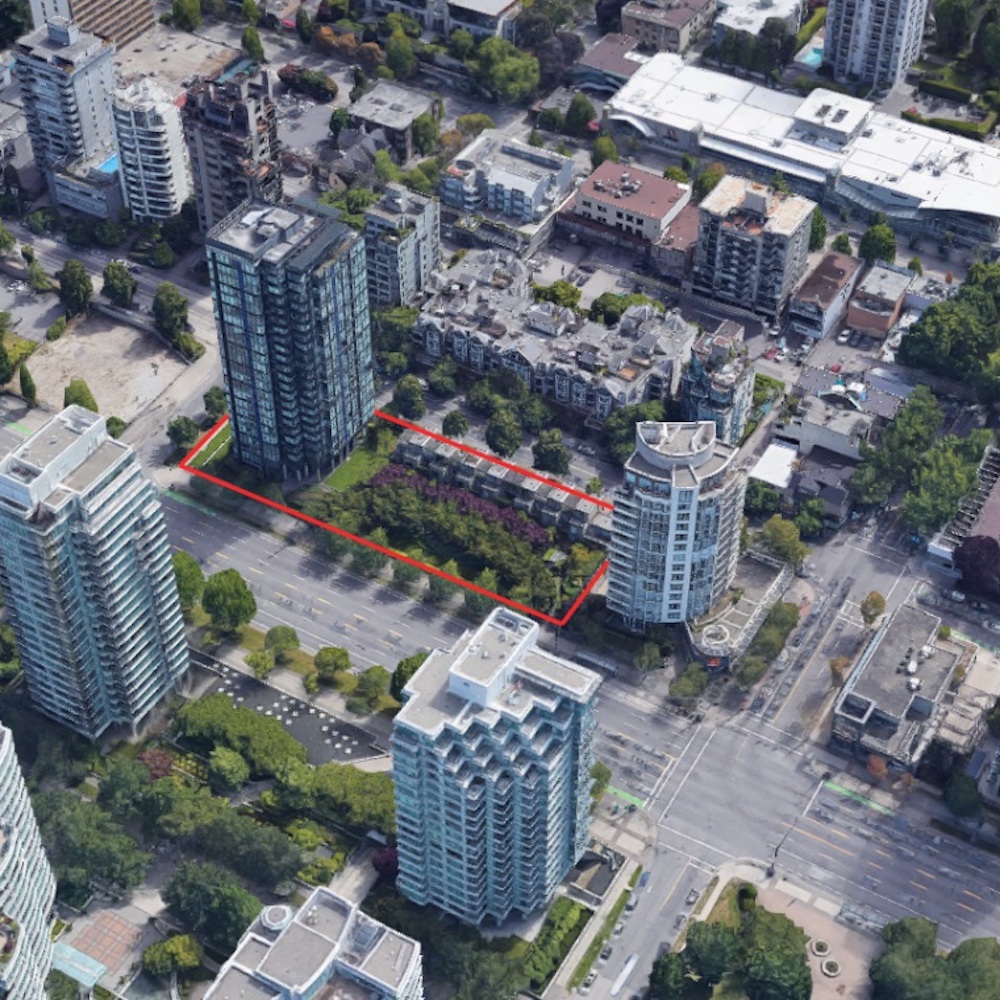 Existing form of 1723 Alberni Street compared to future towers in the area. (1723 Alberni)

Rolando Vallarino, a realtor, owner, and resident who extensively researched the idea and is now spearheading the effort to convince his neighbours, estimates strata owners stand to see an appreciation value of about 60% if they collectively decided to sell the complex to a developer.

Based on his case study work, one option for redevelopment would demolish the townhomes to build a 385-ft-tall condominium tower, which is permitted for the site under the city’s 2013-approved West End Community Plan (WECP). There is a view cone above the site, but the allowable height of 385 ft under the WECP is well below the view cone limit of 439 ft. The potential total floor area of the new tower is estimated to be roughly 200,000 sq ft. The property’s value with the potential development of a second tower is about $187 million.

Precedent is already set, as the WECP has catalyzed the area along the westernmost end of West Georgia Street, near Stanley Park, to become a cluster of high-density towers. Over the years, developers have been buying the area’s strata properties for luxury redevelopments with high-calibre architecture by international architects. The area will see significant change over the coming years from the completion of the first several major projects. 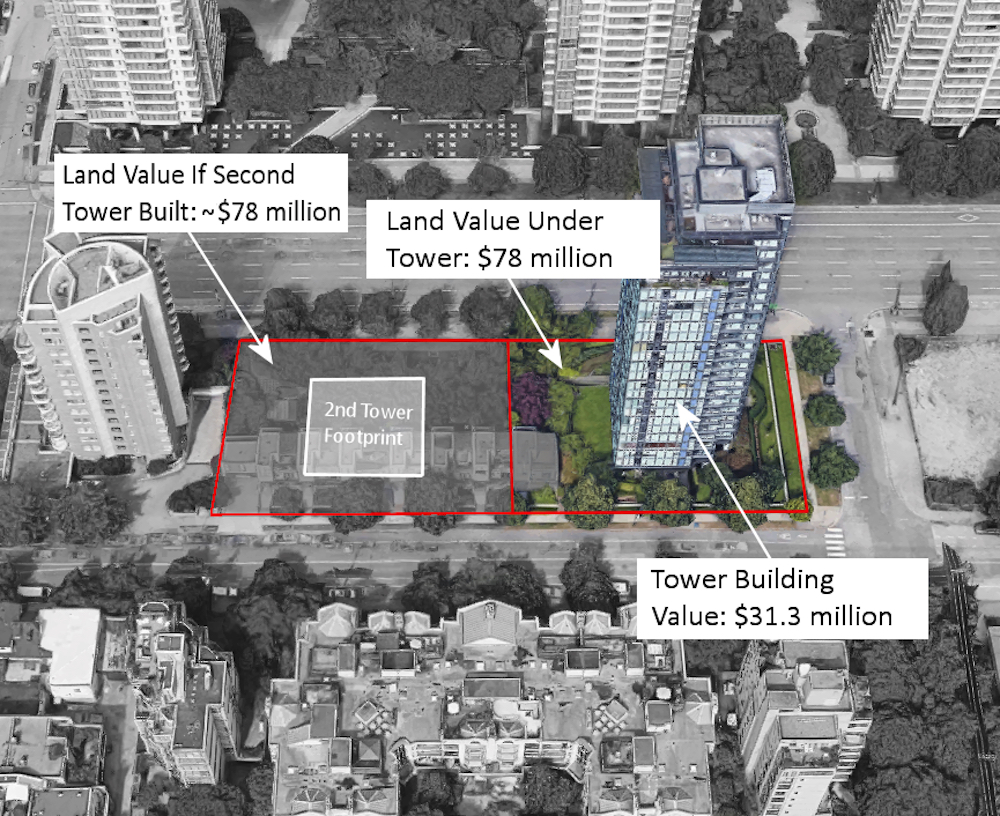 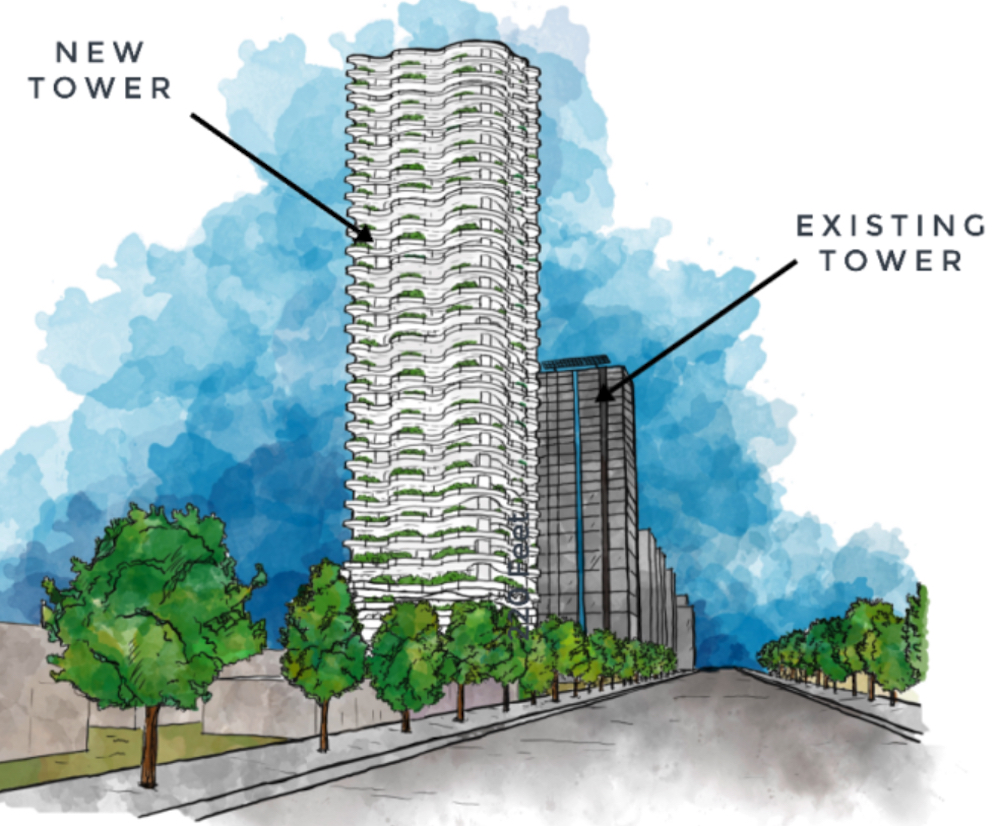 A second option would involve the construction of a pair of 385-ft-tall towers, replacing both the townhomes and the existing tower. But the developer in this scenario would likely wait for some time until the conditions are right to demolish all of the structures, allowing for the site to start from a clean slate — building two towers at the same time in a more technical- and cost-efficient manner.

Given that the existing tower is only about 23 years old and has decades left in its useable lifespan, there could be some opposition to its demolition.

The developer could potentially temporarily convert the existing tower into market rental housing to gain an estimated $3.5 million in annual income to help finance the acquisition cost, while also practicing deferred maintenance with the expectation that the tower would be demolished in 10 to 20 years. Two new towers would provide a total floor area of about 400,000 sq ft.

“Given the lot can accommodate two towers and the current density being a third of the new developments are being built next door, this means that the complex, as it stands right now, is very low density, which makes its redevelopment inevitable. I believe it’s only a matter of time before a developer will start to notice the potential and start to circle the block so to speak,” wrote Vallarino.

“This is yet another reason why it’s so important to organize and sell ourselves as a development opportunity rather than wait for a developer to start strategically purchasing units to gain control as they did in the four mid-rise condo buildings across the street. The latter would result in a wide range of purchase prices and not necessarily a fair and orderly assessment valuation across all units.” 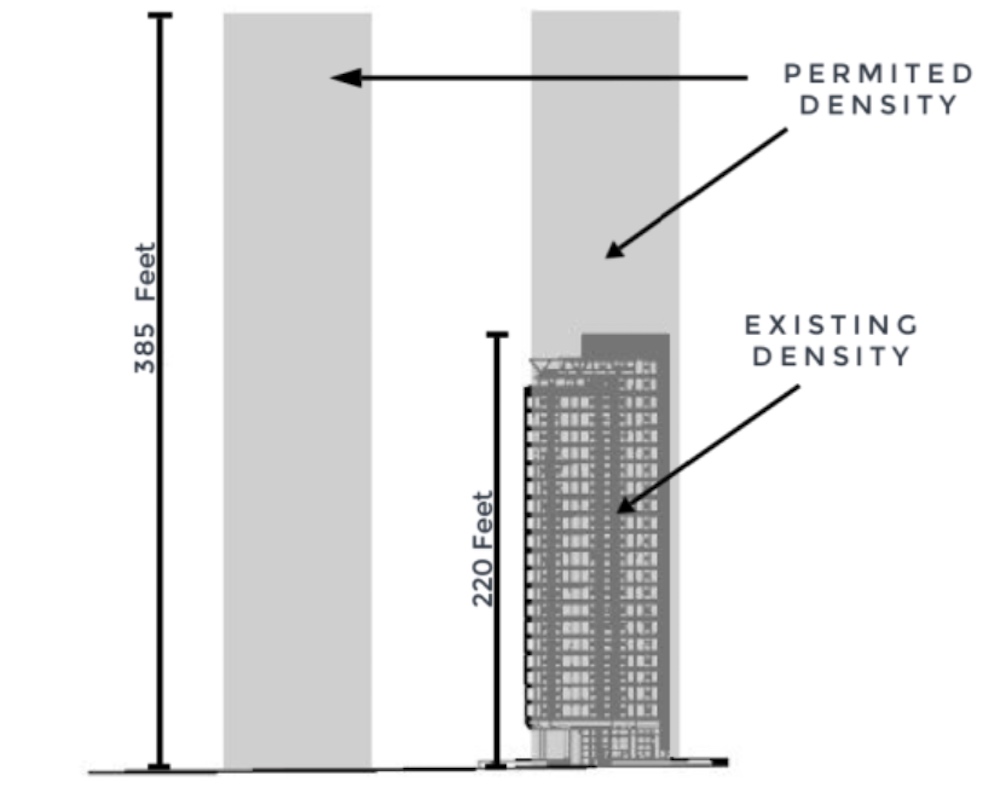 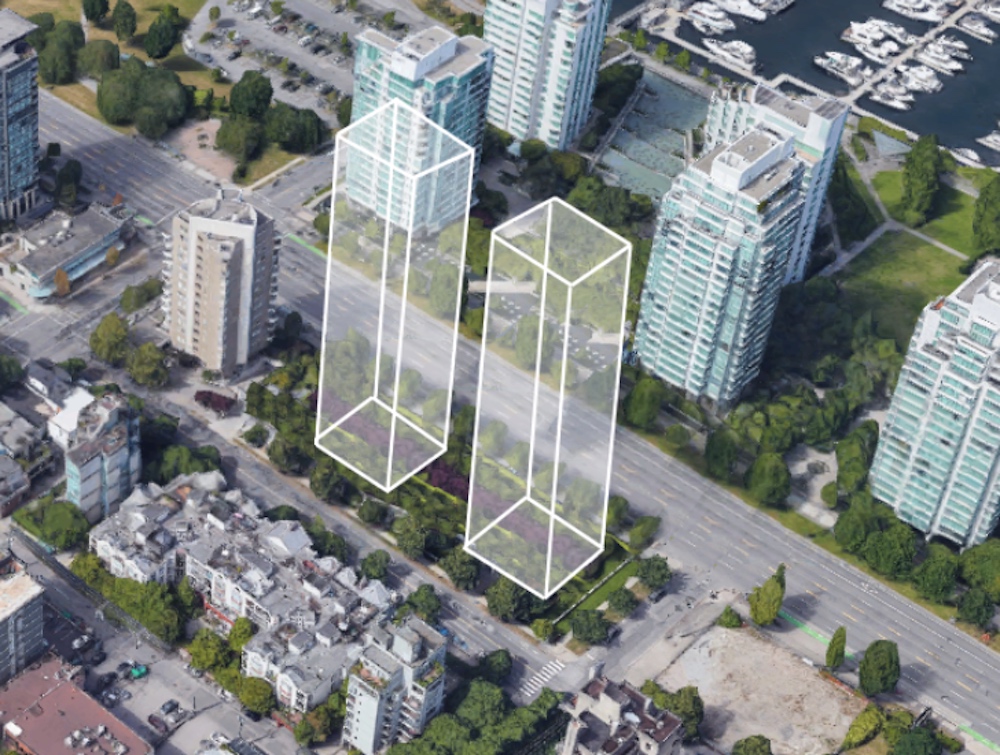 The third option for redevelopment involves a developer buying both 1723 Alberni Street and the smaller site at 1788 Alberni Street, which is at the Denman Street end of the city block.

Currently, 1723 Alberni Street is occupied by a 1993-built, 13-storey residential building. While the WECP permits a 385-ft-tall tower on this adjacent site, the allowable building height is reduced to 322 ft by a view cone. A three-tower complex could become a lucrative option for a developer, with a tower at 1723 Alberni Street boasting protected and unobstructed views to to the north and west.

In order to proceed with the next steps, a majority (50%+) of strata owners need to agree to hiring an agent to lead the process. The final decision to sell the property to a developer requires at least 80% of owners to agree. Vallarino is currently in the process of gauging early interest before pursuing the strata’s formal processes.

If they reach that far into process and approve a sale to a developer, the strata owners could split the proceeds by either calculating the stake each unit has, based on the percentage of the entire piece of land in relation to the size of the unit’s floor area, with further consideration for higher values for units within higher floors. Alternatively, they could assign an independent assessor to value all the units, and have the sale price split according to a fixed percentage of the value of the units. 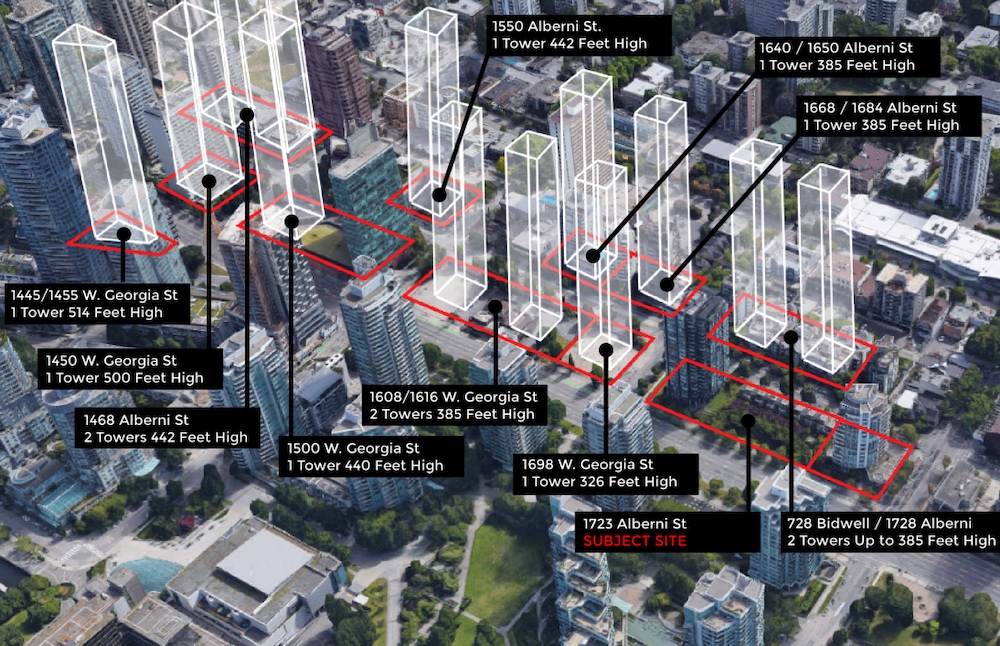 This past spring, Vancouver City Council approved Anthem Properties’ proposal to redevelop the former Chevron gas station at 1616-1698 West Georgia Street into a 33-storey tower with 127 condominiums. While the view cone and the WECP combined permit a height of up to 385 ft, city staff mandated the height be reduced to 326 ft to reduce the shadowing on Marina Square Park. The developer acquired the property for $70 million in 2017.

Further to the east, the longtime White Spot restaurant site at 1608-1616 West Georgia Street was also sold in 2017 for $245 million. A 2019-submitted application calls for two towers reaching up to 385 ft with 38 storeys, containing a combined total of 455 condominium homes.