Seven years ago, the governing B.C. Liberals unveiled an ambitious $14 billion public transit plan for the province, with the bulk of the new infrastructure slated for the Metro Vancouver region.

Gordon Campbell and Kevin Falcon, then-Premier and then-Transportation Minister, announced the sweeping plan during a press conference on January 14, 2008 as a key initiative to achieve the provincial government’s greenhouse gas reduction targets.

The so-called “Provincial Transit Plan” outlined a $10.3 billion strategy to build three new rapid transit lines in Metro Vancouver – the $1.4-billion SkyTrain extension to Coquitlam (Evergreen Line), $2.8 billion to extend the Millennium Line to UBC under Broadway, a reaffirmation of the $2 billion Canada Line being built, and $3.1 billion to double the capacity of the Expo Line, including station and control system upgrades, platform extensions to accommodate six-car trains, and a six kilometre extension in Surrey.

“One new transit line was committed to in each of the previous three decades,” said Falcon in 2008. “This plan delivers three lines in the next decade.” 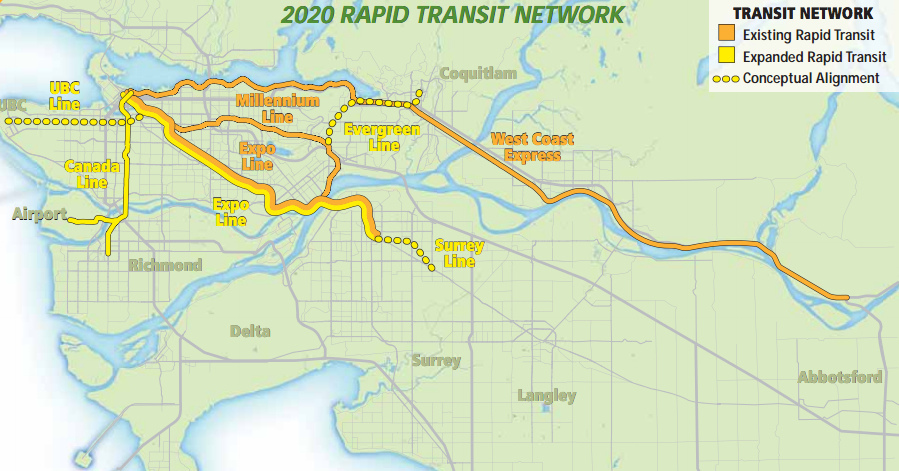 Another $1 billion was highlighted for hundreds of new SkyTrain cars to provide greater capacity and replace aging rolling stock.

The government at the time earmarked an additional $1.2 billion for nine high capacity rapid bus routes across the province, including a route in Kelowna (Westbank to UBC-Okanagan campus) and Victoria (Downtown Victoria to Langford).

The remaining seven rapid bus routes would have been located in Metro Vancouver, along Highway 1 across the new Port Mann Bridge, Hastings Street from downtown Vancouver to SFU, 41st Avenue from Joyce Station to UBC, Highway 99 from White Rock to Bridgeport Station, King George Highway from Surrey City Centre to White Rock, Fraser Highway between Langley and the Expo Line in Surrey, and Highway 7 from Coquitlam Central Station across the new Golden Ears Bridge. 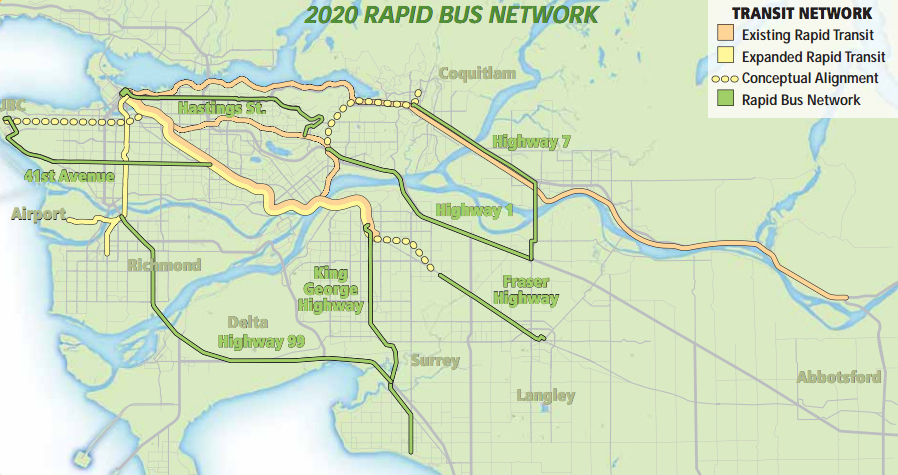 All of the projects would have been completed over a 12-year period for a completion by 2020. With the full implementation of the plan’s components in Metro Vancouver, it was envisioned that regional transit usage would increase from 12 per cent in 2008 to 17 per cent in 2020 and 22 per cent by 2030.

Of course, the big question everyone had then was how the mega project was to be funded.

Campbell said his government was willing to contribute $4.75 billion towards building the new infrastructure, including $435 million that was already dedicated for the Canada Line. The remaining gap in funding would be covered by the federal government, TransLink and municipal governments, pending negotiations after the Olympics.

As we enter further into 2015, only a few elements of Campbell’s much-touted Transit Plan have been achieved – a rapid bus service that runs across the Port Mann Bridge opened in 2012, Surrey’s first B-Line rapid bus service kicked off the following year, and the 11-kilometre long SkyTrain Evergreen Line is now 60 per cent complete and steering towards a fall 2016 completion.

As one would expect from a complete change in government leadership and cabinet, policies often shift drastically as they did with the B.C. Liberals’ continued governance under Christy Clark’s premiership.

In 2013, she made an election campaign promise to determine a solution for Metro Vancouver’s public transit funding woes through a regional public vote – a decision that angered regional mayors as the vote was originally scheduled to coincide with the 2014 municipal election.

The vote was ultimately delayed until after the municipal elections, but the region’s Mayors’ Council was given a June 30, 2014 ultimatum to finalize a detailed, fully costed vision of what the transportation improvements would entail.

The outcome, the $7.5 billion Mayors’ Plan, consists of major elements from the B.C. Liberals’ transit plan from just six years before, which includes fragments of long-term visions already drafted by TransLink.

If the transit plebiscite receives a ‘Yes’ majority, it will provide the provincial government with the mandate to move forward with legislation to implement the 0.5 per cent transit tax.

But the transit tax will only partially fund the full cost of the $7.5 billion Mayors’ Plan. The tax will raise $250 million in new revenue on annual basis totalling $2.5 billion over 10 years.

Another $5 billion will need to be raised if the projects are to be built within the short term: there is a need for the provincial and federal governments to become key partners and fill the funding gap.

On Wednesday, Stone announced that Victoria would commit one-third of the costs to fund the projects, provided the investments are supported by a business case. Another one-third could arrive from the federal government’s $75 billion infrastructure fund over the next 10 years.

Without funding commitments from senior government, only a few minor elements of the Mayors’ Council plans can be delivered without delay despite the need to have all the projects built today.

Major capital projects in B.C. have normally been delivered with the help of the provincial government and in many cases these projects were spearheaded by the Premier’s Office.

For instance, the last B.C. NDP government initiated the construction of the SkyTrain Millennium Line in the late-1990s, which became TransLink’s first major infrastructural project.

In 2003 and 2004, Falcon pushed TransLink’s elected panel of local politicians to approve the Canada Line (RAV). The issue of building the line to Richmond and the airport was divisive: there were squabbles between board members over the cost of the project, “inflated” ridership projections, and the prioritization of the project with some believing the Evergreen Line should come ahead of RAV.

Senior governments became major funding partners for the Canada Line, with the province committing $435 million and Ottawa with $450 million of the $2.05 billion needed.

The province is contributing $583 million towards the Evergreen Line while Ottawa will contribute $417 million and TransLink with the remaining balance.

Aside from major transportation infrastructure projects, senior governments were responsible for other capital projects such as the Vancouver Convention Centre expansion, the sports venues for the 2010 Olympic Winter Games, the Sea to Sky Highway and the Gateway Program, with the largest components of the project being the new Port Mann Bridge, Highway 1 widening and new South Fraser Perimeter Road.

Local agencies and municipal governments do not have the financial capacity to proceed with mega projects on their own. In addition, some of the most challenging barriers proposals face is when municipal politicians are more concerned about the short-term costs projects bring on the micro (local) level rather than the benefits within the macro (regional and provincial) point of view.

It was last June that 20 of the 21 mayors of Metro Vancouver’s municipalities agreed to a thoughtful, comprehensive transportation strategy – an exceptionally rare cohesive moment of progressive, long-term thinking for the region’s economic, health and environmental well-being.

If Metro Vancouver residents want better transit, the solution might not be a ‘Yes’ vote in the transit plebiscite but rather a new provincial government that cares about Metro Vancouver and its transit network aspirations.

The B.C. Liberals lost five key ridings in Metro Vancouver after the 2013 provincial election, including the much-coveted Vancouver-Point Grey riding. Campbell first won the riding in 1996 when he was the Leader of the Opposition for the B.C. Liberals, and he secured it again in subsequent general elections in 2001, 2005 and 2009.

Clark also won Point Grey’s 2011 by-election following Campbell’s resignation, but she was unable to reclaim the seat during the 2013 election, forcing her to seek a seat in Kelowna through a by-election.

Ever since the B.C. Liberals lost their footing in some of the most urbanized areas of Metro Vancouver, their policies have shifted towards being more rural focused (George Massey Tunnel replacement to serve B.C. Liberal ridings in the south of Fraser) and they have kept their distance from TransLink, even though the regional transportation authority is an entity of the provincial government.

Both Clark and Transportation Minister Todd Stone have also been relatively silent in public on their “support” for the ‘Yes’ side: their response to the Mayors’ Council request for necessary supplemental provincial funding can be described as cold and indifferent.

Even if the transit plebiscite receives its 50 per cent plus one ‘Yes’ result, popular projects like the SkyTrain Millennium Line extension under Broadway and rail rapid transit in Surrey could still be many years away.