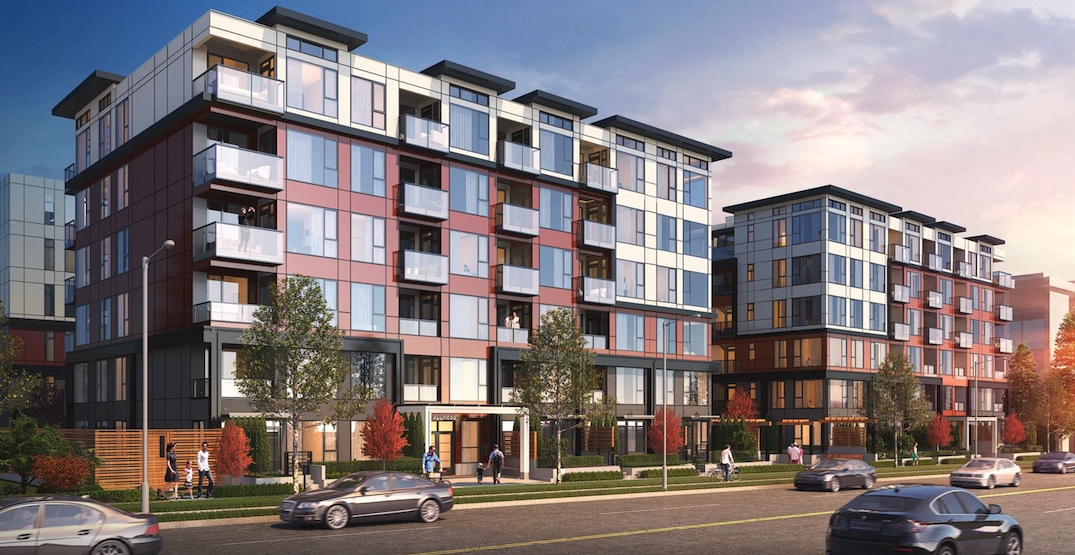 Properly is a new kind of real estate brokerage that offers innovative tools, services and technology that take the stress out of real estate. As the only brokerage in B.C. to help you buy before you sell, Properly is transforming the real estate experience. Learn more at Properly.ca.

The heated real estate market in Metro Vancouver shows no sign of abating, with the latest example being the complete sell-out of the future Radley condominium development within the northeast corner of Surrey City Centre.

Over the first weekend of April, according to Key Marketing, all 193 units in the six-storey woodframe project by West Fraser Developments at 13832 108 Avenue sold out in just 48 hours.

The project team claims 99% of the successful buyers came from within jurisdictions under the Fraser Valley Real Estate Board (FVREB) — which includes easternmost communities of Metro Vancouver such as Surrey and Langley — and that there were 5,000 registrants interested in buying a home in the development. The project is expected to reach completion in 2024.

This kind of activity also aligns with the findings of a market update by real estate marketing and intelligence firm MLA Canada last month, which found that a record number of homes were entering the market within the Fraser Valley. There was a month-over-month increase of 75% in February 2022, resulting in the highest number of new listings since 2016.

There were 18 project launches in February 2022, releasing 2,318 units into the market, representing a 38% year-over-year increase. And 59% of the released units in February 2022 were sold.

Concrete buildings have been particularly active in pre-sales, accounting for 55% of released inventory in February 2022 and achieving a same-month absorption of 70%. The first tower, named Aspect, in Bosa Properties’ Parkway project in Surrey City Centre sold 88% of its 362 units in its 51-storey tower after a month, after launching on February 11, 2022, and at an average price per square foot of about $1,100.

This also paves the way for the anticipated $1,200 price per square foot in Concord Pacific’s The Piano, which is expected to launch later in 2022.

March 2022’s tally has yet to be released, but the forecasted pre-sale home for the month was 11 project launches generating 2,066 units across Metro Vancouver — Real Estate Board of Greater Vancouver (REBGV) and FVREB, combined. This includes 1,579 concrete units, 412 woodframe units, and 75 townhomes.

“With sales momentum high, available supply low, and the threat of consecutive rate increases looming overhead, developers are now ramping up marketing for what is expected to be an especially active Spring market. While we’re unlikely to see the historic sales activity that occurred in March of last year, buyers continue to remain motivated to enter the market,” states MLA Canada.

Overall benchmark prices in the FVREB are beginning to exceed those in the REBGV, with MLA Canada calling this a “market correction as real estate has historically undervalued homes in the Fraser Valley relative to prices in Greater Vancouver.”