Written for Vancity Buzz by Will Woods – founder and chief storyteller at Forbidden Vancouver walking tours.

After a night leading our gothic walking tour the Lost Souls of Gastown, I often find myself deep in conversation with tour guests about haunted places and buildings in Vancouver. I’ve found there’s nothing people like more than sharing their stories of ghost sightings and strange occurrences.

So based on those conversations – and Forbidden Vancouver’s own research – here is a list of 13 of the most haunted places in Vancouver. 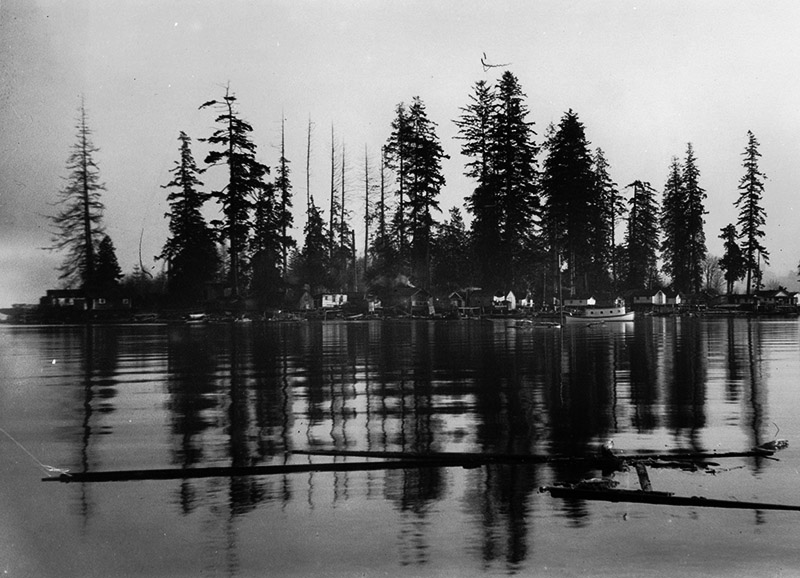 The history of Deadman’s Island, today a small naval base just off Stanley Park, is almost too gothic to be believed. Once a pest-house for smallpox victims, it was also the city’s first graveyard. Nobody has any idea how many people have been buried there.

Hopefully the Royal Canadian Navy sailors and staff who live there today are heavy sleepers – apparently the sound of chains being dragged around the island late at night is often heard. 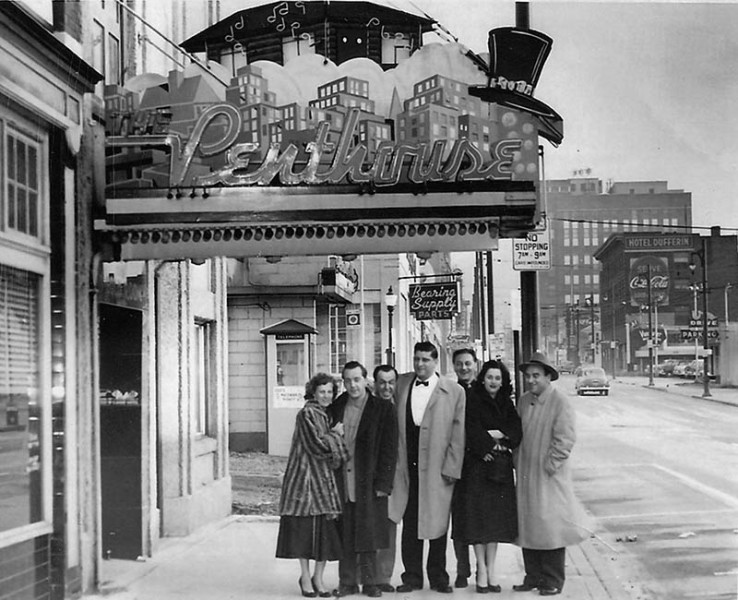 It’s the history of Vancouver, stuffed into that old building on Seymour Street, like a stripper into a bustier.” So said Vancouver heritage advocate Maida Price.

As you might expect for one of the city’s oldest nightspots – an infamous venue dating back to the 1940s which is the proud former haunt of the likes of Frank Sinatra and Sammy Davis Jr. – the Penthouse has no shortage of scare stories.

Its resident ghost is said to be a middle-aged woman, dressed demurely, who reportedly enjoys freaking out the staff late at night, by opening and closing windows. 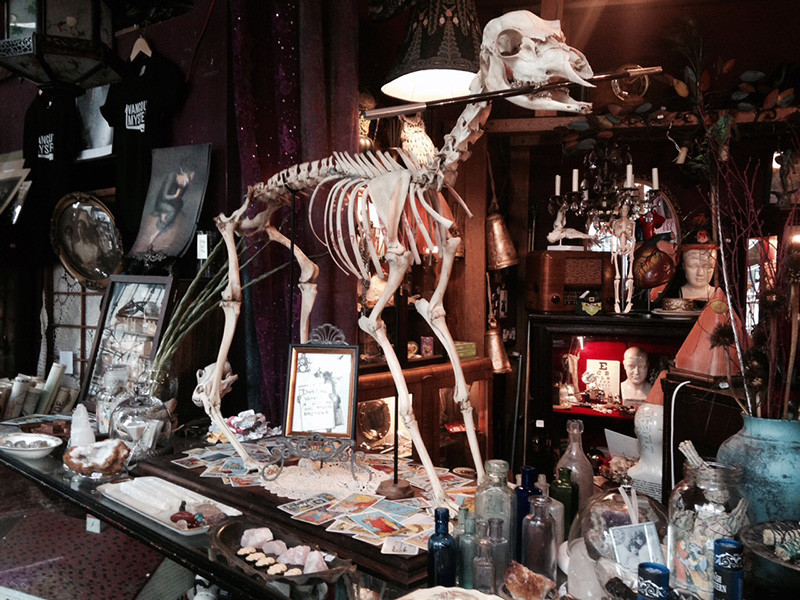 This decades-old antique store is nestled in one of Gastown’s oldest buildings, the J.W. Horne building at 321 West Cordova Street, and has a similarly long history of unexplained occurrences. I interviewed the owner, Anne Banner, to find out more. 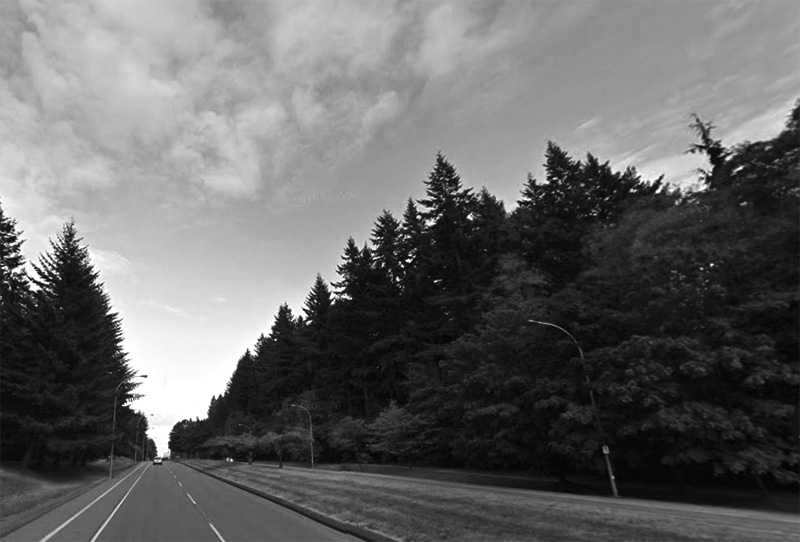 One of the city’s most enduring ghost tales is that of the mysterious female hitchhiker who haunts West 16th Avenue, out towards UBC. The long stretch of road through Pacific Spirit Regional Park can seem remote, it’s dark at night and surrounded by forest. Coming across a lonely young woman hitchhiking on the side of the road might seem odd.

It will seem even more odd when she climbs into the back of your car without saying a word, gives you a piece of paper with the UBC library address on it, and then promptly disappears into thin air.

Legend has it many years ago the woman was left there on the side of the road by her boyfriend, after they had a fight. Attempting to hitchhike, she was hit by a passing car and killed. 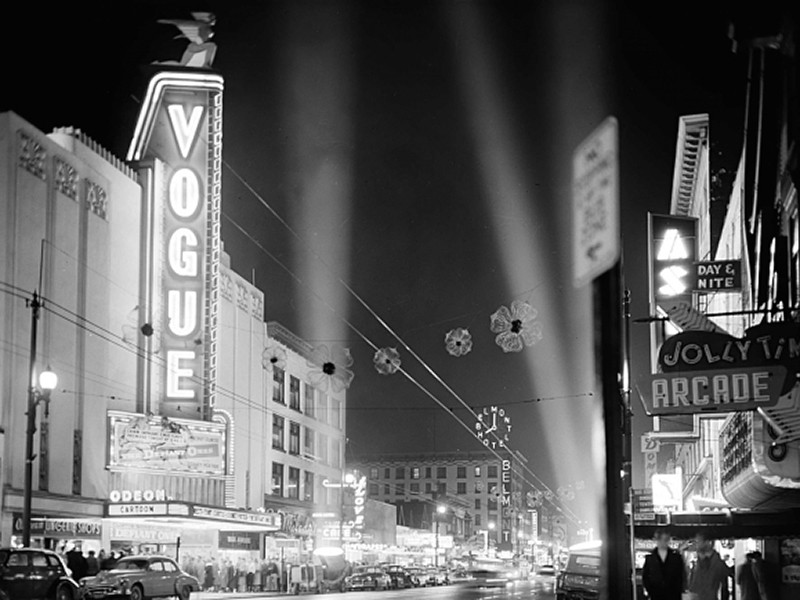 Granville Street was once known as “theatre row,” and was home to more than a dozen movie theatres. Built in 1941, the Vogue Theatre was one of the most loved. It’s an Art Deco gem, and still does the city proud as a live music venue. Find out what happened when we spoke to former manager Bill Allman, who experienced the ghost of the Vogue Theatre first-hand. 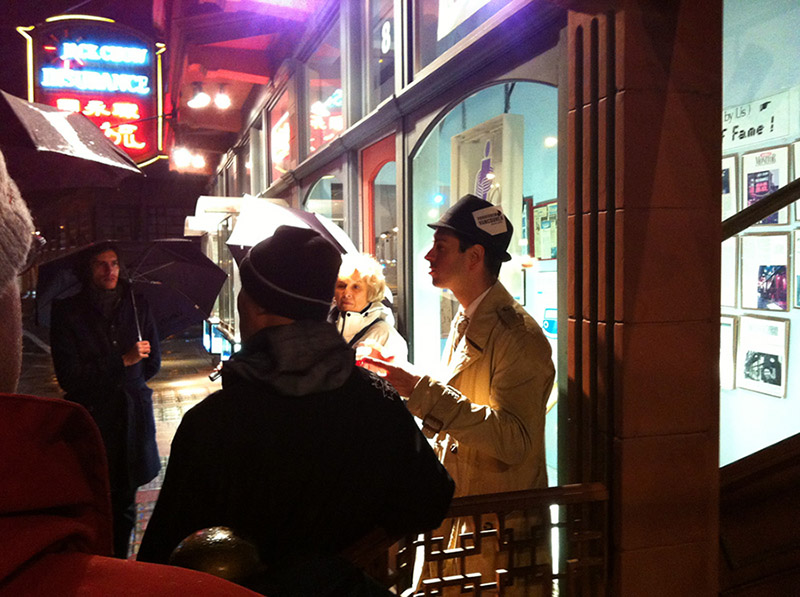 The Jack Chow building on West Pender Street is renowned as the “narrowest commercial building in the world.” It was built by Sam Kee in 1913 as a coffee house and indeed its official name is the “Sam Kee Building.” The previous building – also a coffee house – was much larger, however the City of Vancouver decided to seize the land under the building in order to widen Pender Street.

That left Mr. Kee with a narrow strip of land, but he wasn’t about to let the city close his business down, so he rebuilt on what was left.

This is the one place on the list where I’ve personally experienced something strange. While standing directly outside the building, waiting for the lights on Pender to change, I felt a firm push in the back. I immediately turned around to see who had pushed me and was shocked to discover there wasn’t a soul within a good 10 feet of where I stood.

I’m naturally a skeptic when it comes to ghost stories, but it remains to this day something I cannot explain. I’ve featured the building myself on walking tours through the area, so I hope it wasn’t the ghost of Mr. Kee telling me to get lost. 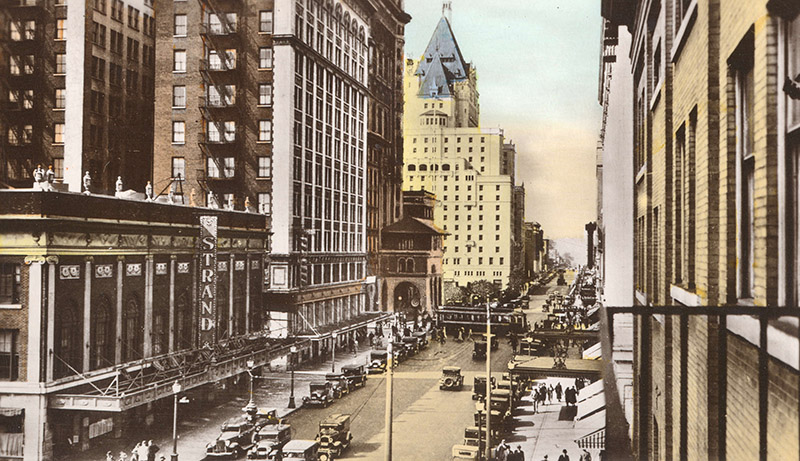 The Hotel Vancouver’s Lady in Red is perhaps Vancouver’s most famous ghost – said to be the spirit of a long-dead socialite who haunts the hotel’s corridors and elevators.

Want to know more about Hotel Vancouver’s mysterious Lady in Red? We spoke to the hotel’s long-serving concierge David Reid to find out what he knew about this glamorous apparition. 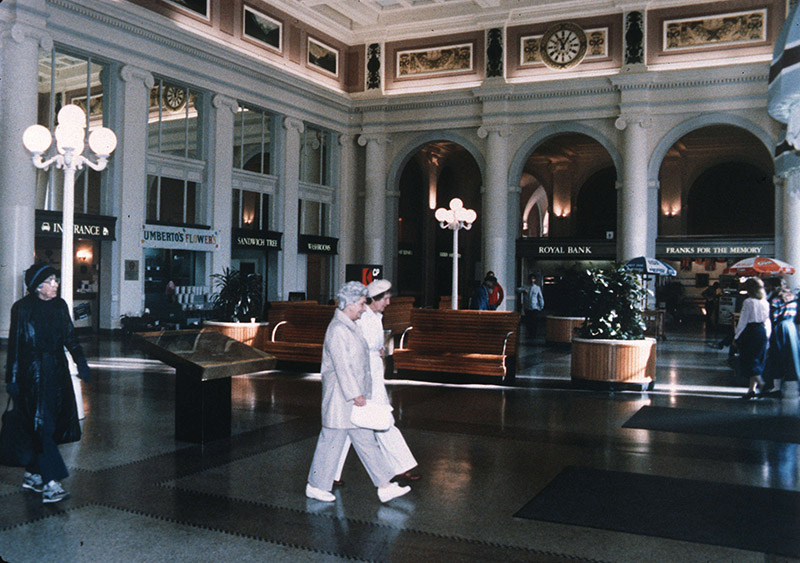 Vancouver’s busiest transit station is seemingly a favourite haunt of ghosts and apparitions: the three little old ladies who sit on a bench waiting for a train that never comes, the 1920s flapper who sometimes dances in the corridors and the decapitated brakeman who wanders the tracks late at night. If you ask me it just sounds like a regular Saturday night at Waterfront station, but perhaps there is a supernatural explanation for these various sightings. 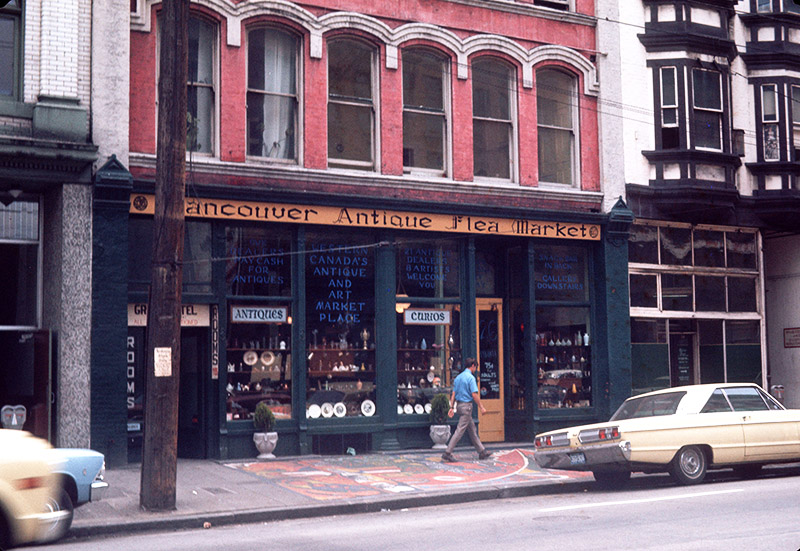 Now a high-end retailer, a strange tale dates back to the building’s days as an antiques market. One morning the owner arrived and opened the store to find an entire dining table and chair set placed upside down in the centre of the room. Apparently nothing else in the store had been touched.

The building was originally the Grand Hotel, run by a notorious scoundrel by the name of Tommy Roberts. He was famous for conning money out of drunk loggers who were in town for a good time. Mr Roberts met his demise in 1918, aged 42, when he was shot dead during a poker game.

Whether Tommy’s ghost has since occupied his time by moving furniture around, it’s hard to say. Perhaps he endlessly searches for something he left in the store before he was inconveniently shot? 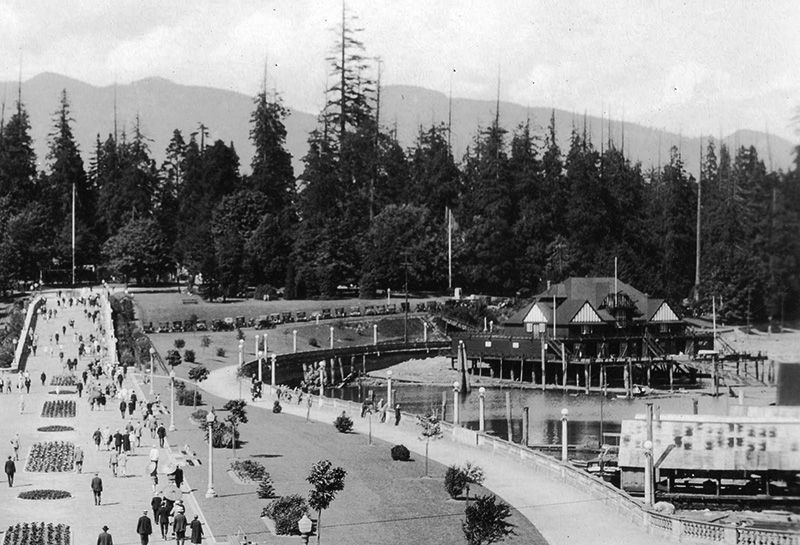 In the city’s earliest years Chinese residents buried their dead near the shoreline in what would later become Stanley Park – effectively the area was an unofficial burial ground.

According to traditional Chinese custom, many of the dead were later dug up and their bones shipped back to their home villages in China. It’s said the bone collectors lived and worked in a small cluster of buildings on the land occupied today by the Vancouver Rowing Club, along with some other Chinese residents of the time. It’s probably no surprise then that club staff have recounted various tales of strange happenings inside the club. 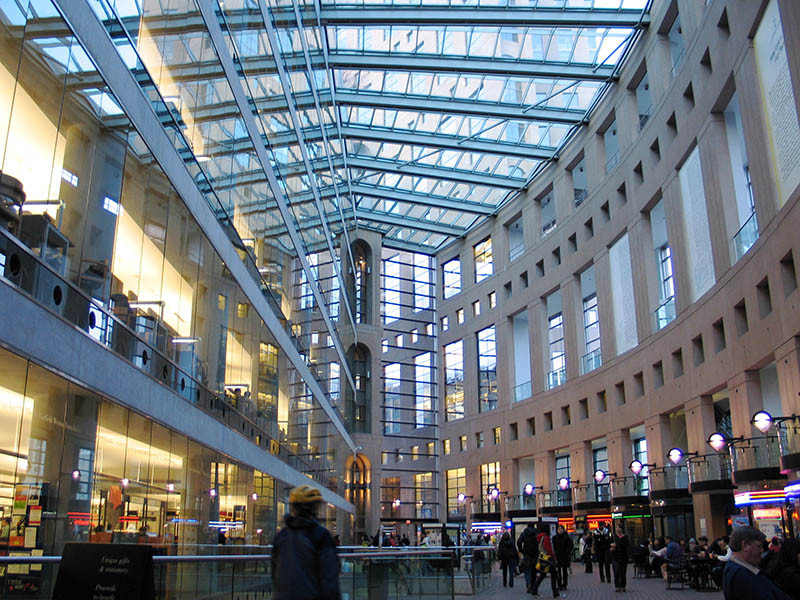 The most modern building on our list, the Vancouver Public Library Central Branch at Library Square opened its doors in 1995. However, apparently 20 years is long enough to acquire a resident ghost.

Rumour has it that a man with long grey hair can be found on the fourth floor, crouching down between the aisles, seemingly picking through a pile of books on the floor. If you happen upon him and ask him if he needs help, it’s said that he’ll lie down on top of the books, then both man and tomes will promptly melt into the floor.

12. The Seawall beneath the Lions Gate Bridge 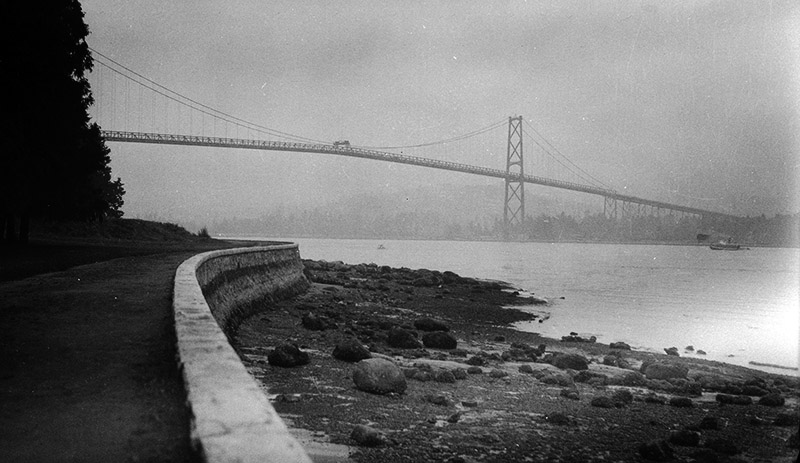 Cycling or running underneath the Lions Gate Bridge on the Stanley Park Seawall, you will undoubtedly feel a chill in the air. Perhaps this is an atmospheric effect induced by the bridge. Or, perhaps it’s the result of the many dozens who drowned there before the waters were dredged in the 1910s. For many years, the “First Narrows” of Burrard Inlet was one of the most hazardous shipping canals in the country, and many a ship – along with its passengers and crew – were lost in those wild waters. 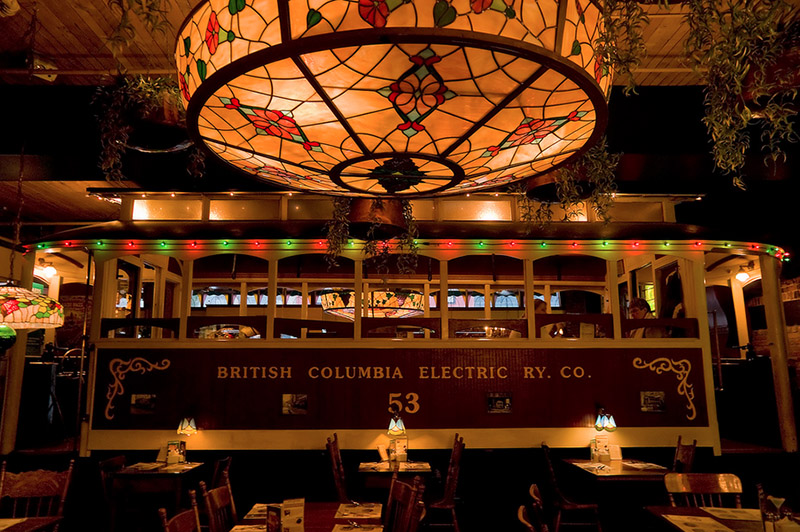 With no fewer than four resident ghosts, the Old Spaghetti Factory in Gastown is a hotbed of paranormal activity. The restaurant’s various apparitions include a street car conductor, a talkative girl holding a balloon, a young boy (who is apparently called Edward) and a mischievous red-headed fellow known as “little red man.”

The building was constructed in 1912 by W.H. Malkin as the warehouse for his grocery company. The enterprising Mr. Malkin was also the city’s mayor for a time.

Perhaps the various ghosts are all waiting around to complain to Mr. Malkin about mouldy groceries they bought from him, or to register their displeasure with one of his mayoral decisions. Who knows?

You can find out more about Vancouver’s dark past and haunted places on Forbidden Vancouver’s Lost Souls of Gastown – happening nightly throughout October and on weekends in November.

Note this article was corrected on November 14, 2015: Vancouver Yacht Club was changed to Vancouver Rowing Club.