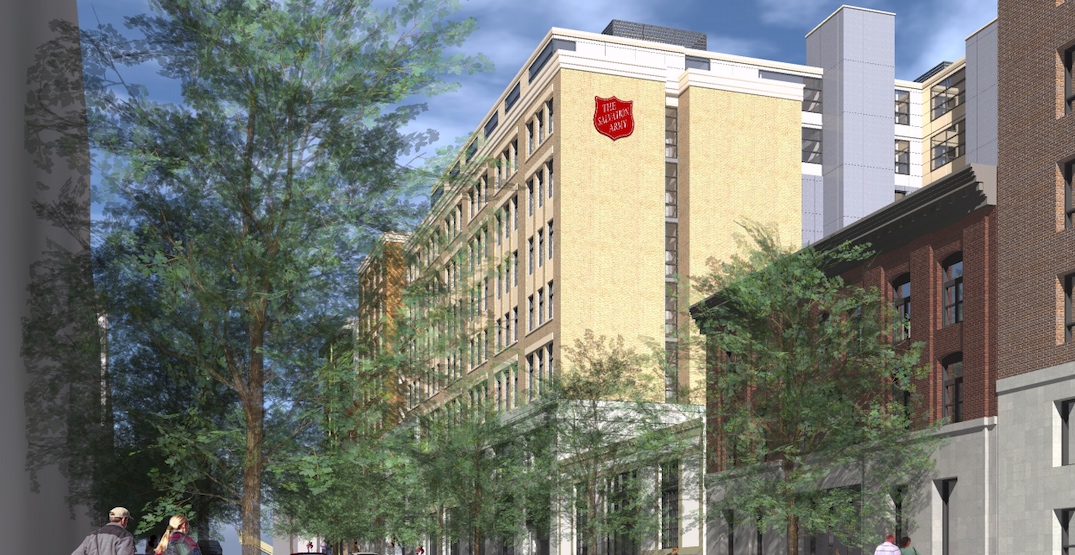 The Salvation Army has revealed its plans to construct a new replacement and expanded facility for its Harbour Light community hub serving Vancouver’s Downtown Eastside.

A development application has been submitted by the not-for-profit Christian organization to redevelop its large mid-block property at 128 East Cordova — the existing site of its emergency shelters, administrative offices, and church.

This also happens to be directly across the street from the existing Harbour Light facility at 119 East Cordova Street, which is not feasible for renovations or conversions because of the building configuration, failing mechanical systems, and seismic deficiencies. 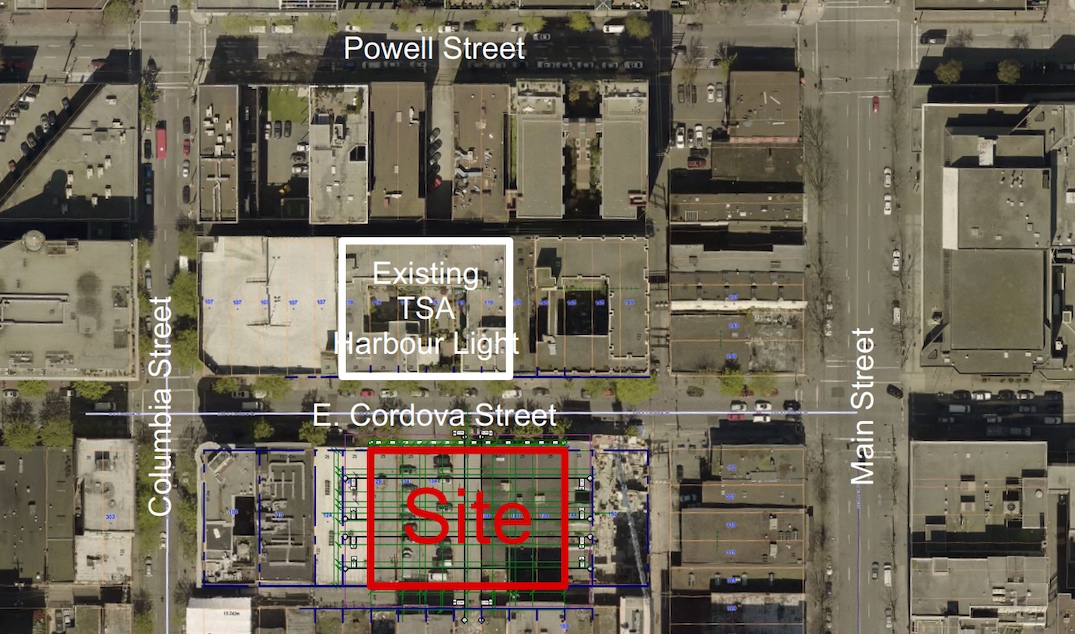 “The proposed Vancouver Harbour Light facility is the largest single contribution to meeting a wide variety of critical social needs and housing in the Downtown Eastside,” reads the application.

“We are proposing this project at a time of unprecedented challenges for the City in affordable housing and other significant social issues.” 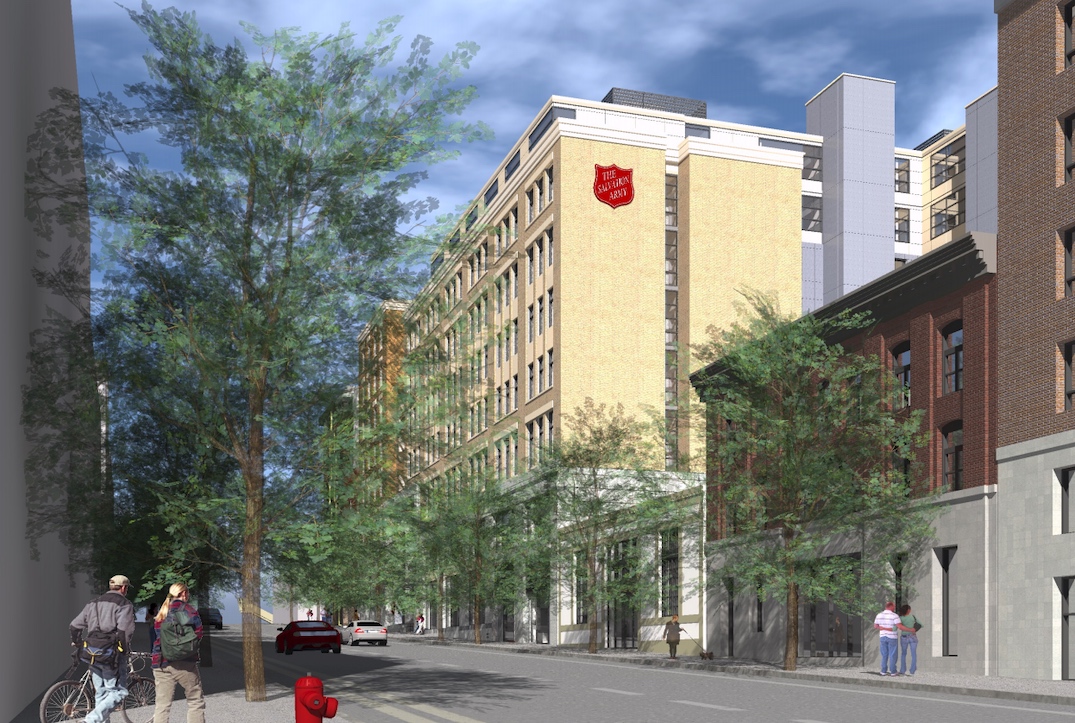 Community uses are all located within the main level, with 6,400 sq. ft. dedicated to community programs and 8,300 sq. ft. for food services. On the second level, 13,000 sq. ft. will be set aside for client programs.

“We have additional height and three double height spaces for the lobby, multipurpose room and dining rooms. For reasons related to security, staff safety, client mental health, movement and comfort, it is essential that the main and second floors have a sense of openness, breathability, increased visibility and an abundance of natural light,” reads the design rationale by NSDA Architects.

Upwards of 300 individuals are expected to be housed nightly at this new facility, and many of these individuals will access services on the main and second levels.

In total, an average of 1,100 clients, community meal guests, volunteers, and staff will flow through the main and second levels daily, with a daily average of 1,000 meals being served.

When it comes to the total number of movements of persons passing through the front entrance and lobby, the estimated number is 4,300 individuals per day. The four elevators will also see 3,300 average daily movements. 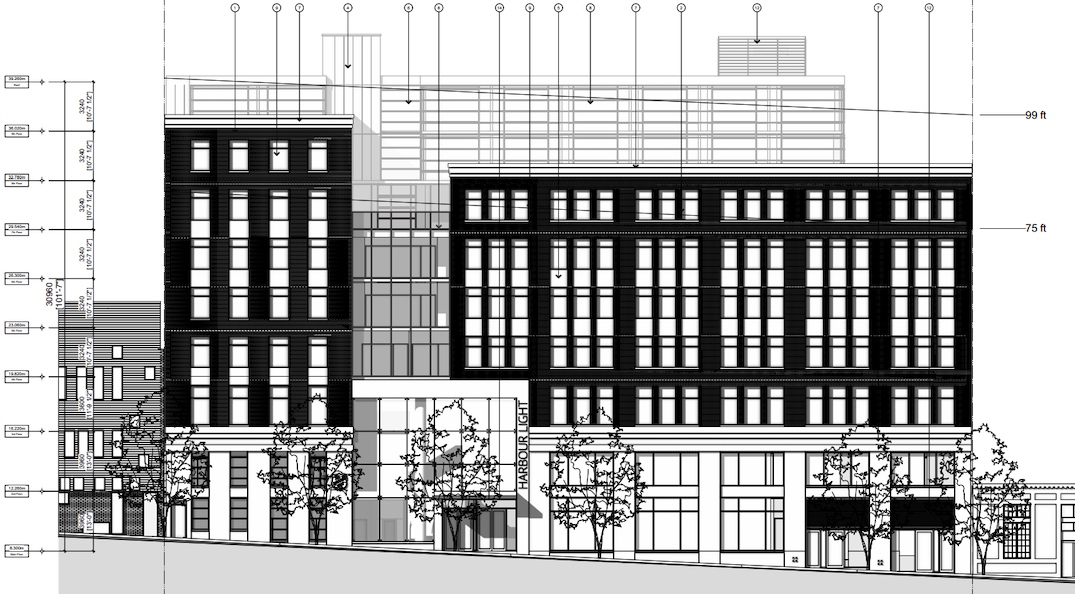 As for the building’s architecture, it will have an exterior of warm tone brick in two colours on the north facade to “be welcoming to the community and brighten the north side of the street.”

“We’ve split these masonry elements into two heights to enhance the ‘sawtooth’ profile that is fundamental to the character of Gastown. The upper floor windows have been oriented vertically as punched openings in the masonry surface.”

Aside from the main entrance, there will be limited weather canopy coverage over the building’s sidewalk on East Cordova to discourage loitering and tenting.

“We have not extended the canopy along the face of the building as the challenge with encampments below weather protection canopies is a growing problem in the Downtown Eastside,” continues the rationale. “This would have a negative impact on our residents, building security, pedestrian traffic and our neighbours.”

Instead, most of the queuing space required for the facility’s programs will mostly be accommodated indoors within the lower floors.

Just 13 vehicle parking stalls will be built into the new building for program vehicles and staff requiring parking for their work.