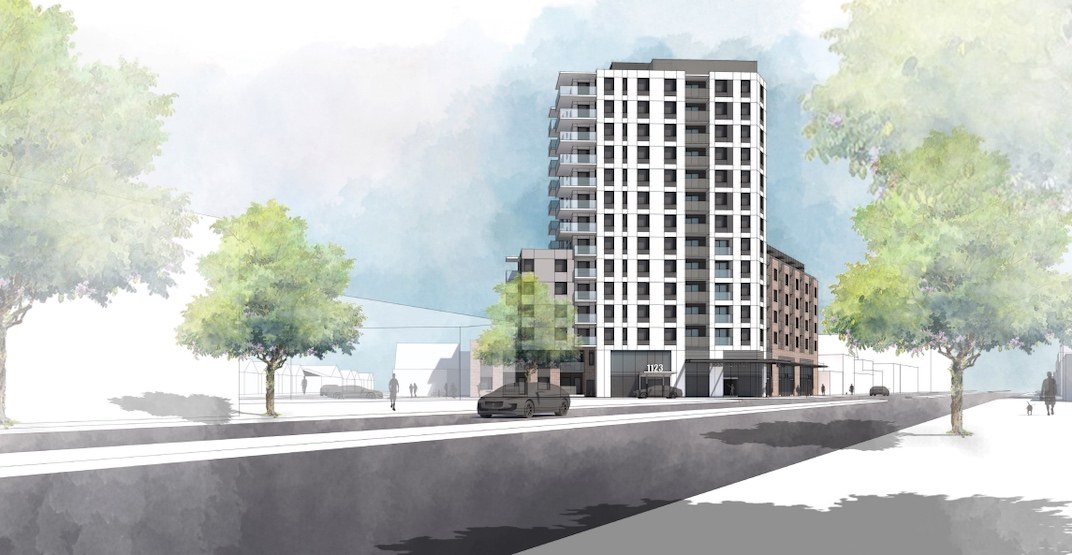 An incentive-driven rental housing redevelopment has been proposed for the northwest corner of the intersection of Kingsway and Glen Drive, in Vancouver’s Kensington-Cedar Cottage neighbourhood.

Local developer Peterson and architectural firm Musson Cattell Mackey Partnership have submitted a rezoning application to the City of Vancouver to turn a 19,200-sq-ft lot at 1111-1123 Kingsway into a new 133-ft-tall ,13-storey mixed-use building.

Currently, the site is occupied by a pair of one-storey car repair buildings. 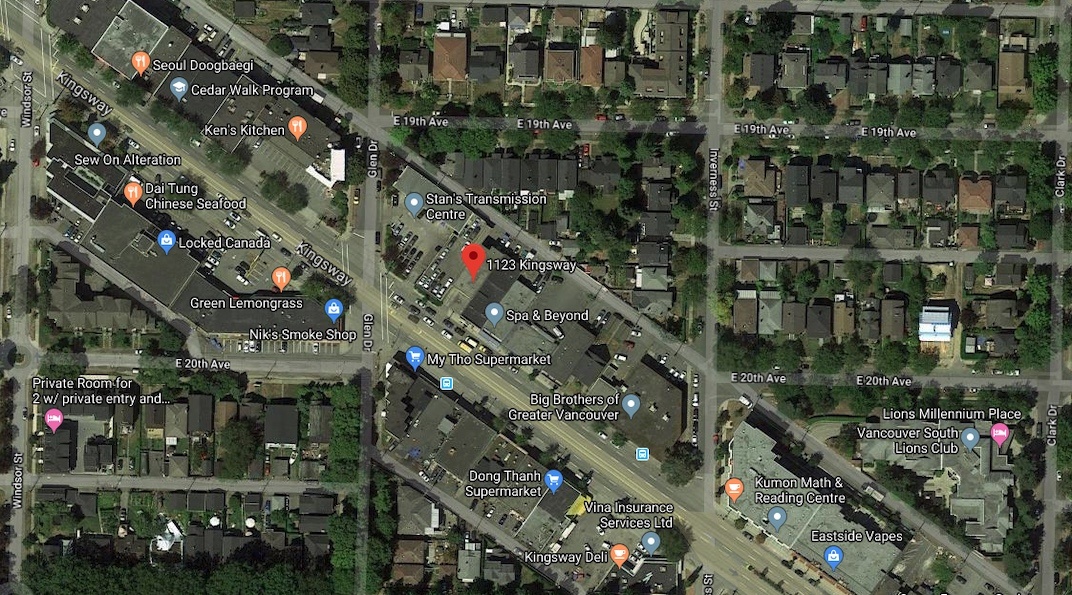 The proposal under the city’s Moderate Income Rental Housing Pilot Program (MIRHPP) calls for 128 secured rental units, with 105 market rental units and 23 units designated at MIRHPP rates. Under MIRHPP, at least 20% of the units must be dedicated to moderate income rental rates of between $30,000 and $80,000 annually.

The unit mix for the project is 29 studio units, 53 one-bedroom units, 43 two-bedroom units, and three three-bedroom units. Residents will have access to an amenity space on the seventh floor with both indoor and outdoor space.

On the ground level with frontage on Kingsway, restaurant and retail units will provide the building with a combined total of 7,300-sq-ft of commercial space. The residential entry is located on Glen Drive to maximize the commercial frontage of Kingsway and the animation of the public realm. 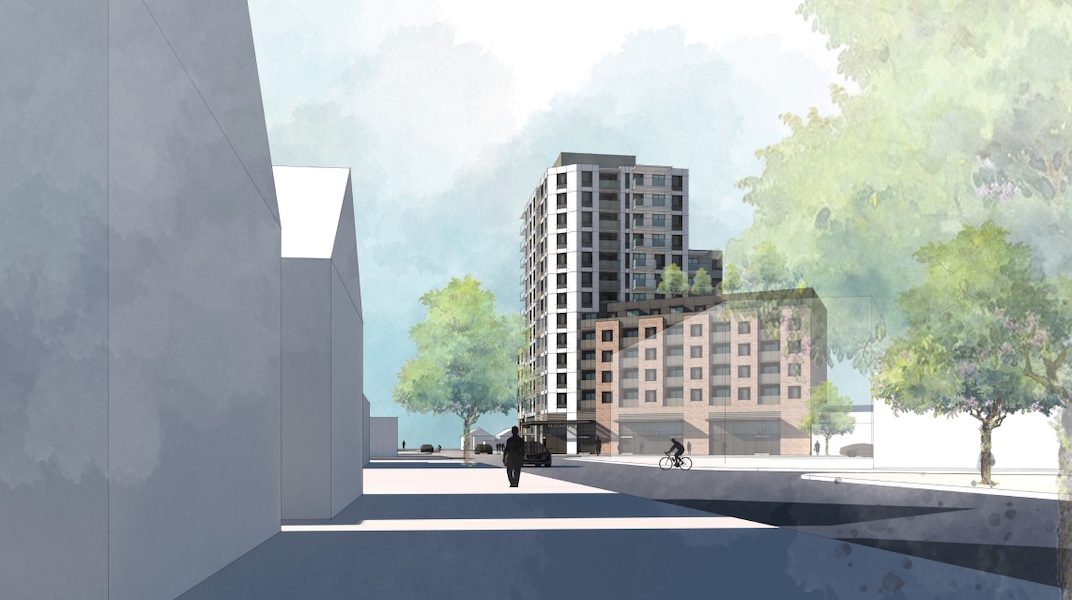 Brick cladding will be used for the exterior of the low-rise and retail portion of the building, while the taller portions of the structure will use varying facade detailing for better definition.

“The proposed massing steps down to the south and east to a six-storey podium facing Kingsway,” it continues. “A low podium with two storey townhomes face the lane to create an animated but compatible use for the lane and neighbourhood to the north. The proposal has included an 18-ft setback from city curbs to allow for landscape, sidewalk and an activated street front.” 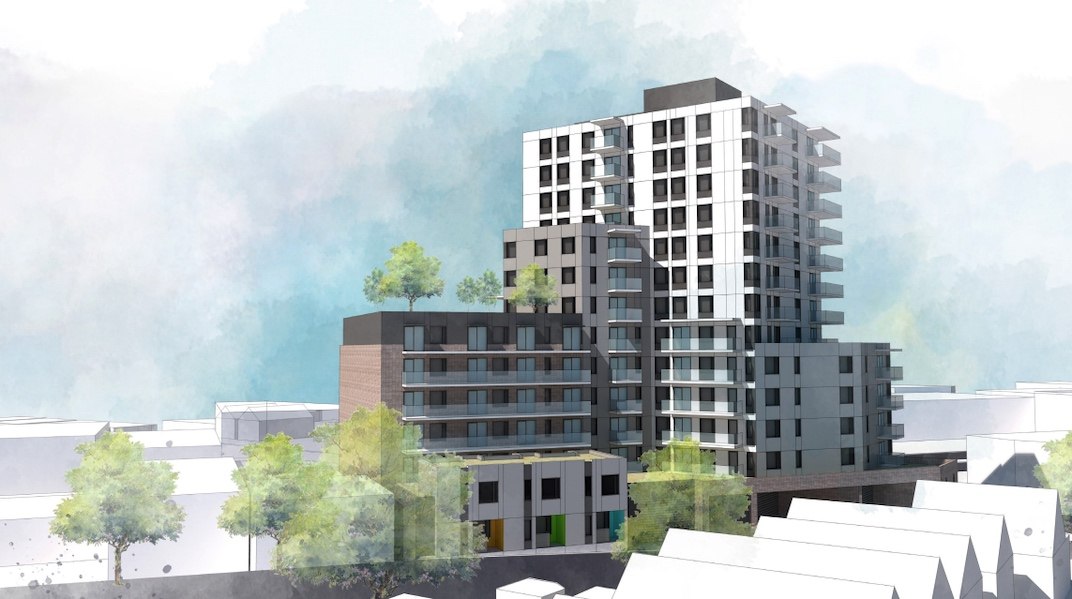 Under the available MIRHPP incentives, the proponent is seeking development cost levy waivers and relaxations in parking requirements.

“There is a development trend in the neighbourhood towards larger mixed-use projects at arterial intersections along Kingsway as evidenced by the projects noted in the Neighbourhood Context Plan,” states the application.

“These developments focus on rental housing, which is starting to develop a revitalized neighbourhood fabric.”