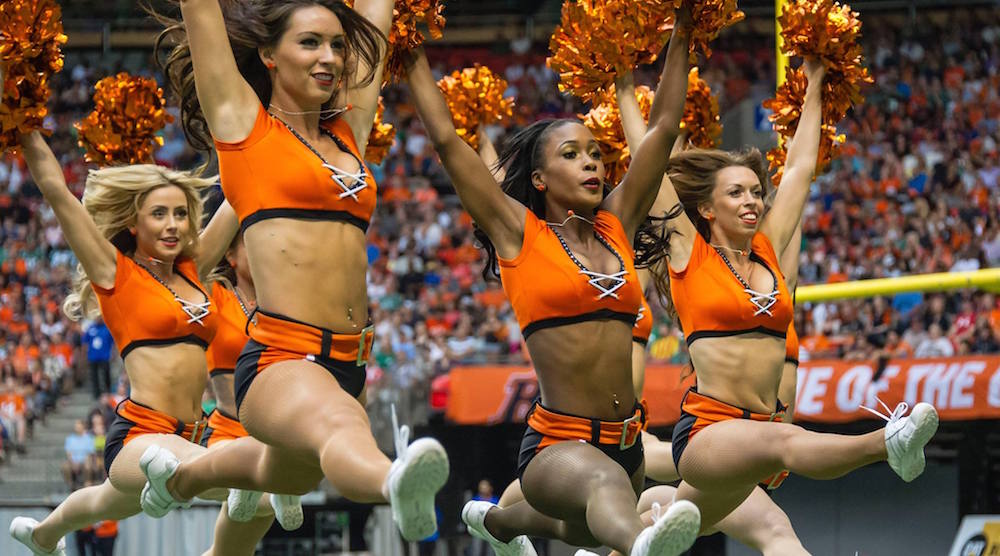 The smiles were bright but the tension was real on Sunday as 102 dancers fought for a spot on the 2016 Felions Dance Team.

With a panel of judges watching each step and kick, it took just two runs across the floor before the first set of mostly curious and unprepared contestants were asked to leave.

While Travis Lulay and some of the B.C. Lions can depend on past success, this team gives no free passes through the evaluation process, so returning members of last year’s Felions squad prepared alongside the nervous newcomers. Long-time team choreographer Jenny Duffy then led the surviving competitors through 20-plus moves of the group routine on which the next round of cuts would be determined. “I love it when the veterans come back because they have the experience and they can take the nubies under their wing, it’s really a cool thing, it’s a part of the [CFL dance team] sisterhood.”

Halie Scaletta was a member of the 2015 team and a 2016 hopeful. “It’s a sparkly sisterhood” Halie said, dispensing advice to some of the eager first-timers. “You represent B.C. and the football club and you make so many great friends.”

For Smithers, B.C. born medical student and performer Sarah Ivey, Sunday was her first try at making the dance team, but like most of the dancers, she wasn’t taking the opportunity lightly.

“There’s so much energy in there, I fell in love with everybody. She looks so good, look at those kicks. Look at that hair! It’s overwhelming and nerve-racking… I watched all the videos from the auditions last year and learned all the choreography from that. For this day, I’d say i’ve been training for 7 months.”

With paid performances and appearances plus an epic dance team showdown at this year’s Grey Cup in Toronto, each of the 35 or so spots on the squad are fiercely contested.

The high-stakes competition continues with two full days of group routines, individual tumbling, and the all-important interview process before the 2016 team members are selected.

After leading the Felions for over 12 years, Vancouver entrepreneur Alexandra Severyn knows what she’s looking for in prospective recruits.

“[Making the team] is about so much more than just the dance ability… We spend a lot of time together, we hire girls that are 19, some are 32, so they have to respect each other and they have to gel. It’s a girls club for sure… All these women have something in common, they love to dance, they like to be out there in the public, they have a lot of energy and it’s just so much fun.”

There was certainly no shortage of sparkles, big hair, and fierce Blue Steel looks on Sunday, but behind the glitter and the reality-show feel of the competition, you couldn’t help but be impressed by the desire and purpose behind all those involved. 102 enter but only 35 shall emerge (Image: Vancity Buzz / Carlo Bodrogi)

The 2016 Felions Dance Team roster will be decided this week. You can catch their first performance on Friday June 17th when the B.C. Lions host the Calgary Stampeders at B.C. Place Stadium.