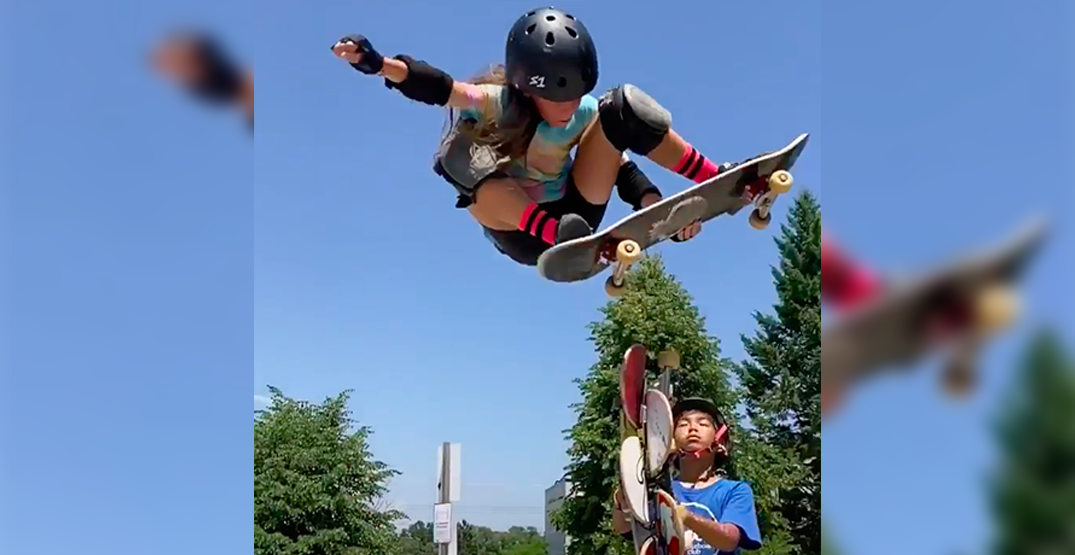 As a video of a young skateboarder from Toronto launching over 12 stacked boards went viral, she’s setting her sights on a bigger podium, an Olympic one.

Fay Ebert is only 10, but after her father signed her up for a series of skateboarding lessons, she’s developed a passion for the sport, one that has landed her a sponsorship with a major skateboard company.

Ebert already turned heads with her shredding talent, but when she posted a video to social media of her hurdling over a dozen skateboards, the internet loved it.

“It was just us flowing around at camp,” she told Daily Hive in an interview. “All the camp kids gave up their boards.”

She says they rounded them up by asking other riders for “board donations.” Starting small, the pile of wood and wheels was originally a way to pass the time.

Not something accomplished on the first try, the video shows the dedication she has for the sport, trying over and over to clear the pile. Surprisingly, Ebert says it was easy until the stack reached double digits, “10, 11, 12 were the hard ones.”

Garnering over 24,000 views on Instagram at time of writing, it has brought her some attention, but hasn’t distracted the young athlete from her ultimate goal, qualifying for the Olympics.

“I have gone to a few Olympic qualifiers, so I do have a chance. So that’s my focus right now,” she said.

The lessons have been put on pause, but Ebert says she’s been learning on her own, focusing on more flip tricks and learning the “front-side air.” For the uninitiated, a front-side air is when a skater launches of a vertical ramp and grabs their board on the front side between their feet.

The pandemic has tapered her ambitions somewhat though, as the way to qualify for the Olympics is to work your way up the rankings through competition, most of which have cancelled due to the pandemic. Tokyo 2020 was meant to be the sport’s debut as an official part of the Games, but those too have been delayed until 2021.

As for Ebert, she has a simple explanation for her recent online popularity.