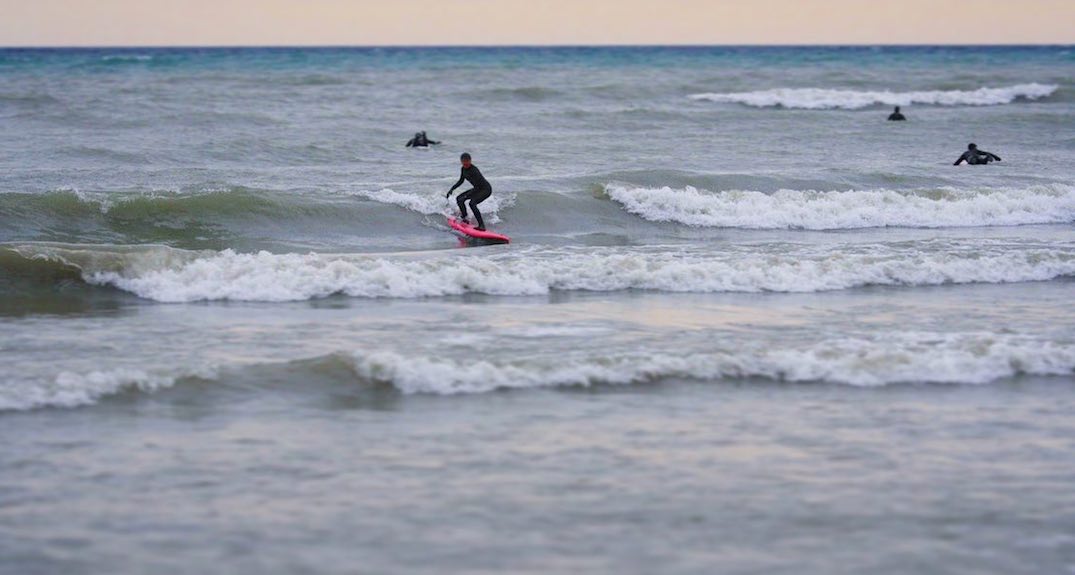 Have you ever wanted to catch a wave, but in Toronto, and in the dead of winter?

It might be too intense for some, but there’s a dedicated group of women surfing the Great Lakes and showing their prowess in the cold waters of Ontario.

Robin Pacquing co-founded Lake Surfistas with Lisa Parkes – a Canadian grassroots movement that brings together women of all abilities to surf and do Standup Paddleboarding (SUP).

Pacquing is an instructor and established Great Lakes surfer who began Lake Surfistas in 2014 to create a greater sense of community for the female surfers on the Great Lakes.

“We wanted to hold a party for all these new women who were hitting the Great Lakes and just hang out and be together. It was beautiful, around 30 or 40 women showed up, which was a lot for the time. Eventually it became a yearly event,” she told Daily Hive.

From that point, the movement has grown organically with over 1,000 participants in the Lake Surfistas Facebook group.

While the group has increased substantially, Lake Surfistas is not a registered not-for-profit. If you’re a beginner it’s always advised to go with someone who is experienced, as the waves, especially in the winter, aren’t safe for anyone with little knowledge of the sport.

“We highly encourage beginners to have someone there who is more experienced and to just have another set of eyes for safety reasons,” Pacquing said. She also emphasized that when doing cold weather surfing, while it sounds “exotic and awesome” and looks “visually impressive” it’s a “dangerous sport.”

“You need to prepare yourself mentally, and equipment wise you need the right gear, and it’s not cheap.” A neoprene suit (at least 5 mm), gloves (at least 7 mm), and boots (at least 7 to 8 mm) are necessary, otherwise you can get into “serious trouble.”

Water temperatures hover around 1°C or 2°C, but on a cold winter day the water is actually warmer than the air.

“I find it’s way colder skiing on Blue Mountain than it is surfing during the winter.”

One also needs to make sure the shoreline is free of ice, ice chunks and ice shelves, which often develop overnight quickly and pose a risk.

“Unless you’re super advanced I don’t recommend it. If you’re a new surfer, you need to know that ice water is a mental challenge – cold water shock is a real hazard. As time goes on you can assess the risk, do all these steps first, forecast the beach you’re at, and just know all these factors. It’s so different than surfing in the summertime,” Pacquing noted.

Emphasizing safety is also imperative for Jordan-na Belle-Isle, an employee at Surf the Greats in Toronto and Paddle Board instructor.

“Walking on the ice shelf is very dangerous. Anyone getting into cold weather surfing should do their research. Make sure you’re doing it safely and know your limits,” she told Daily Hive.

After Belle-Isle’s honeymoon to Hawaii, where she went surfing for the first time, she knew she had to continue it back home in Toronto.

“I came back and found out you could surf on the Great Lakes, and I had this desire to do it locally. I’ve been doing it for five years now.”

The appeal for surfing in the winter comes from necessity, Belle-Isle said. And the biggest misconception about surfing is that it’s a summer sport. It’s actually a winter sport, perfect for the Canadian long winter.

“The surf season is the fall and winter because we do depend on the wind and the cold pressure systems for the waves,” she said. In these temperatures, Belle-Isle is surfing about once a week, but she knows people who do it more frequently. The most popular spots are Woodbine Beach or as the surfers call it, “Abay” or “Ashbridges Bay.” The Scarborough Bluffs is also a good location due to the four different breaks there.

But Belle-Isle says the surfing community is “a little secretive” and doesn’t love to give out their favourite locations, nor do they want people to think that anyone can just surf in these areas. One needs the expertise and skill to do it safely.

For Lake Surfistas, if newcomers want to join, people have extra boards and lend them to those who don’t have any gear, or for people who are just starting out in the sport.

“I have an extra board that’s solely dedicated to those who don’t have one,” Pacquing said. “I wanted to eventually create a community library of gear, because like lots of sports gear, it’s very expensive.”

She surfs with a core group of women who go on a regular basis. While COVID-19 has postponed their annual beach event, which is always attended by many, they have done some online fundraising for charities.

“I am super proud of the friendships I’ve made among the women with Lake Surfistas, and how we’ve found each other in these local spaces.”

And for a space that has long been dominated by men, Pacquing is also proud to see in recent years how women have made their mark in surfing.

“It is a white, male-dominated sport even though it has Hawaiian Indigenous roots,” she explained.

But the game is changing. The International Surfing Association (ISA) has created a program to have women from around the world become certified surf judges, which Pacquing has now become, and it’s an opportunity she never thought she’d have.

“I’m seeing a lot more representation for women and BIPOC communities in surfing – we’re now competing and surfing some of the biggest waves in the world. And we’re also seeing it here with the women at the Great Lakes.”

Belle-Isle also sees the image of the white, blond, younger surfer changing, but knows that it’s still the dominant stereotype about the sport, which deters people from trying it.

“People who don’t look like that are intimidated by the sport. If you think that you’re not young enough, or sporty enough, or athletic enough, and think, ‘I can’t do this,’ it’s not true. Surfing is for everybody.”