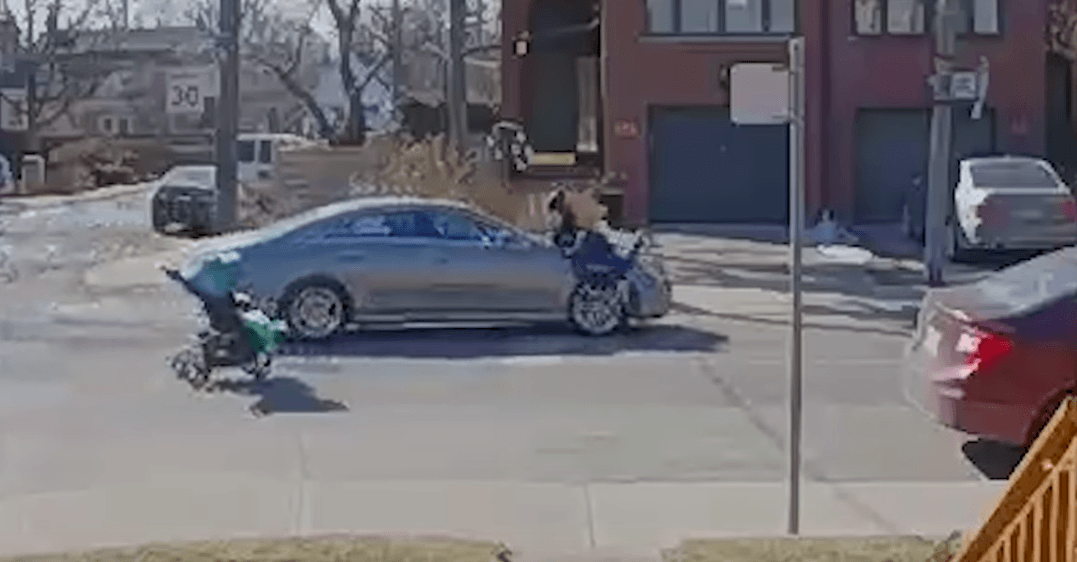 A woman took a ride on the hood of a vehicle after it nearly struck her and her stroller on Wednesday.

The incident occurred around 10:30 am in a residential neighbourhood described as being in Midtown, Toronto, by the video’s caption, and was caught on film by household security footage.

The video shows the woman approaching an intersection with her stroller. One vehicle is crossing through the intersection, and two are waiting at the stop sign.

As the first vehicle begins to pass through the crossing, the woman also steps out into the street, and she and the stroller are nearly hit by the oncoming car.

The woman proceeds to scream at the driver of the car before she appears to try to photograph them on her phone. The vehicle tries to pass around the woman, which is when she jumps onto the hood.

The car drives for a few metres and the woman holds on, going for a short ride and leaving her stroller at the crossing. While she’s aboard the first vehicle, a second passes through the intersection, avoiding the chaos… and the stroller.

Eventually, the woman dismounts the vehicle, returns to her stroller, and carries along down the street.

“Due to the construction of the Metrolinx Eglinton LRT, a lot of traffic has ended up on the side streets and these occurrences are actually fairly frequent… although this one is maybe just a bit crazier than usual,” the video’s YouTube description reads.

Yeah. This definitely doesn’t look like your typical beautiful day in the neighbourhood.

Daily Hive has reached out to the owner of the video for comment.