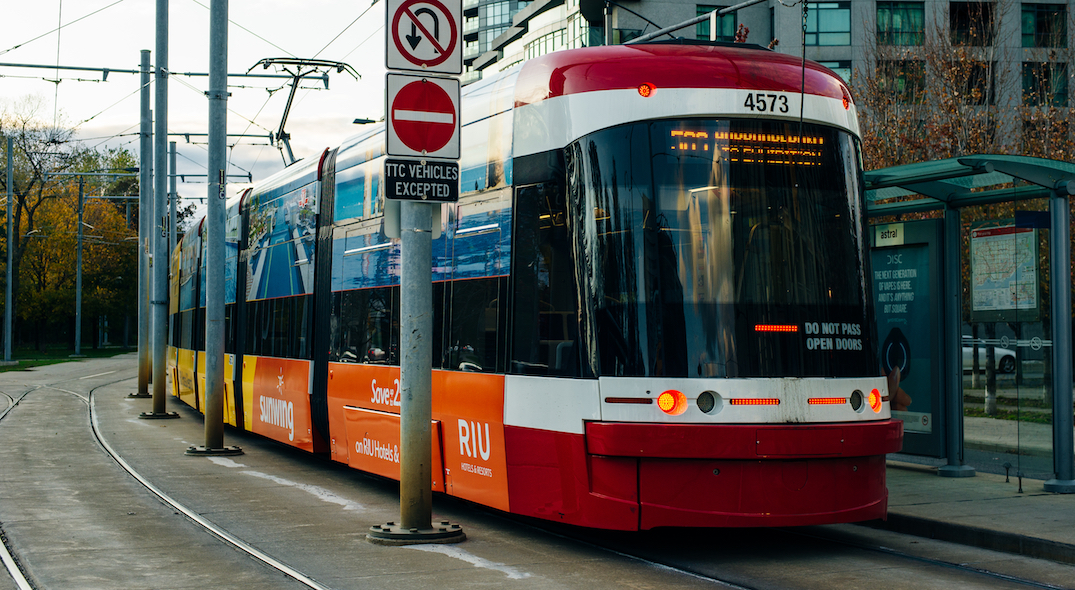 Another day, another harrowing episode of violence within Toronto’s public transit system — this one involving a suspect who, according to police, stabbed a stranger multiple times aboard a TTC streetcar in broad daylight on Tuesday afternoon.

The Toronto Police Service reported on Twitter just after 2:20 pm that a stabbing had occurred on a streetcar in the area of Spadina Avenue and Sussex Avenue.

The suspect, a woman in her 40s, was arrested at the scene, according to police, while the victim, a woman in her 20s, has been rushed to hospital with multiple stab wounds in serious but not life-threatening condition.

“When officers arrived on scene they located the female victim. She was suffering from stab wounds to her head and face,” said TPS Duty Inspector Lori Kranenburg to reporters Tuesday afternoon, noting that the victim and suspect are not believed to have known each other at the time of the incident.

“When the officers arrived, the suspect was still on scene and has been taken into custody and I’m told that they will be charged with one count of aggravated assault.”

Tuesday’s stabbing comes less than 24 hours after a group of young people were reported to have violently attacked two TTC employees aboard a bus in Scarborough.

The Toronto Police Service issued an alert via Twitter just before 5 pm on Monday, reporting that “a group of 10-15 youths attacked 3 uniformed TTC employees on a bus” in the area of Kennedy Road and Merrian Road, noting that the suspects had fled the area following the attack.

On Saturday evening, another TTC operator was reportedly shot at with a BB gun near Markham Road and Progress Avenue in Scarborough while waiting to start her shift.

Another unprovoked knife attack on the TTC this afternoon. A female was taken into custody after stabbing another female, unknown to her, on the Spadina streetcar. The woman suffered serious but non-life threatening injuries. A knife was recovered at the scene. pic.twitter.com/MWivVw3BAf

While public transit violence is far from a new problem, assaults against public transit riders in Toronto appear to have spiked in recent months, both in number and severity.

A woman died this summer after being set on fire aboard a bus at Kipling Station, while another woman was killed in a double stabbing at High Park Station in December.

Neither of the aforementioned victims knew their attackers, nor have many people who’ve been violently attacked by strangers on TTC vehicles or at TTC stations lately.

It’s gotten to the point where many people, especially those more vulnerable to attacks, are now afraid to take public transit in Canada’s largest city.

Under an increasing amount of pressure to address random acts of violence on public transit and elsewhere in Toronto, Mayor John Tory has vowed to increase budgets for policing and add more Special Constables to TTC vehicles.

“We need to invest more in mental health and addiction treatment – we need the provincial and federal governments to do that as soon as possible,” said the mayor on Friday of the ongoing violence wave.

“We need to continue to support our police service – I support doing that in our city’s budget because I know we need more officers in the downtown and across the city.”

Torontonians are growing more and more concerned with each incident, however, that not enough is being done to protect citizens — particularly women — from unprovoked assaults.

but we’re raising the ttc fares right? being a woman not only in general but in toronto is so fucking scary like https://t.co/rTXeYnpc3u

“Stabbed. On a TTC streetcar. 2 p.m. Broad daylight. Spadina. Toronto is becoming a toilet. NOT by accident. And it’s going to get far, far worse,” wrote one Twitter user in response to the news of Tuesday’s TTC stabbing.

“Look, at this point, if you can take the TTC to and from your destination alive, you’re a survivor,” wrote another. “And it’s not lost on me that women are the majority of victims.”

The TTC addressed the stabbing in a statement issued via Twitter on Tuesday, writing, “Our thoughts are with the victim of this incident.”

“We will, as always, support police as they investigate this awful attack,” reads the transit commission’s early statement. “We don’t have any other details at this time.”