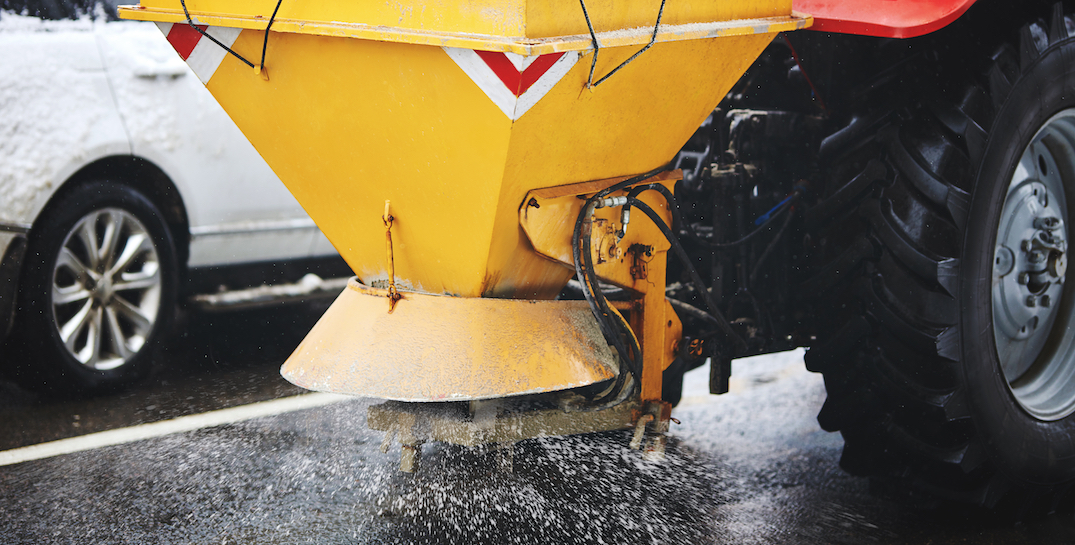 During the winter months the City of Toronto, and its residents, use road salt to help make the streets safer. Yet, the material poses a serious threat to the city’s aquatic life.

A recent UofT study found that the salt spread on roads and sidewalks around the Greater Toronto Area (GTA) during the winter remains a threat to aquatic life in the city’s rivers in the summer.

“Our research shows that chloride pollution from road salt is a year-round threat to our urban freshwater ecosystems,” Donald Jackson, a professor of aquatic ecology in the Department of Ecology & Evolutionary Biology at UofT and one of the researchers of the study, said in a statement.

“Of the samples we took from four GTA rivers and creeks during the summer, we found that nearly 90% exceeded federal guidelines for long-term exposure of aquatic life to chloride.”

The biggest issue with road salt, especially in major cities, is when the weather gets warmer, the water run-off carries a high concentration of chloride from the salt, which flows into the waterways.

“Increased chloride concentrations in freshwater can be toxic and lead to changes in an organism’s behaviour and ability to withstand other stressors,” said Ph.D. student and researcher Lauren Lawson. “It can increase lethality, alter food webs and lead to biotic homogenization where only hardier species survive.”

The researchers estimate that more than one-third of the sites sampled had concentrations that would be “lethal” — as per government guidelines — for two-thirds of aquatic species. The concentrations discovered could also negatively affect reproduction and spawning.

The researchers measured the concentration at 214 sites along four GTA waterways: the Humber and Don rivers and Mimico and Etobicoke creeks. The sites ranged from the headwaters north and northwest of the city to where they enter Lake Ontario in Toronto.

For the study, samples were collected in July and the first two weeks of August, as that’s when chloride concentrations are typically at their lowest level. The concentration is expected to be higher in winter when road salt is used.

Annually, Canada uses around seven million tonnes of road salt, with Toronto contributing 130,000 tonnes each year — an amount equal to the weight of the CN Tower.

The researcher points out that Toronto does have alternatives to road salt, which include a more effective brine and technology designed to reduce salt use.

But, for Lawson and Jackson, there is more work to be done.

For example, they cite that private citizens often use “excessive amounts of salt and spread it in an inefficient manner.” Also, salt use at transit stops is “unregulated,” which can result in poor application.

“We need private citizen education — including for businesses — on the proper amount and application of road salt,” said Jackson. “A little salt goes a long way when applied correctly.”

Given the findings of the study, the authors recommend research to better inform revisions to current federal guidelines. They suggest a focus on site-specific biological communities and increased attention to the year-long impact road salt has on urban ecosystems.